On eve of Prep Bowl, Barnesville and its stroke-felled coach are already winning

Bryan Strand has battled back from a stroke suffered in March, his team and community with him all the way. 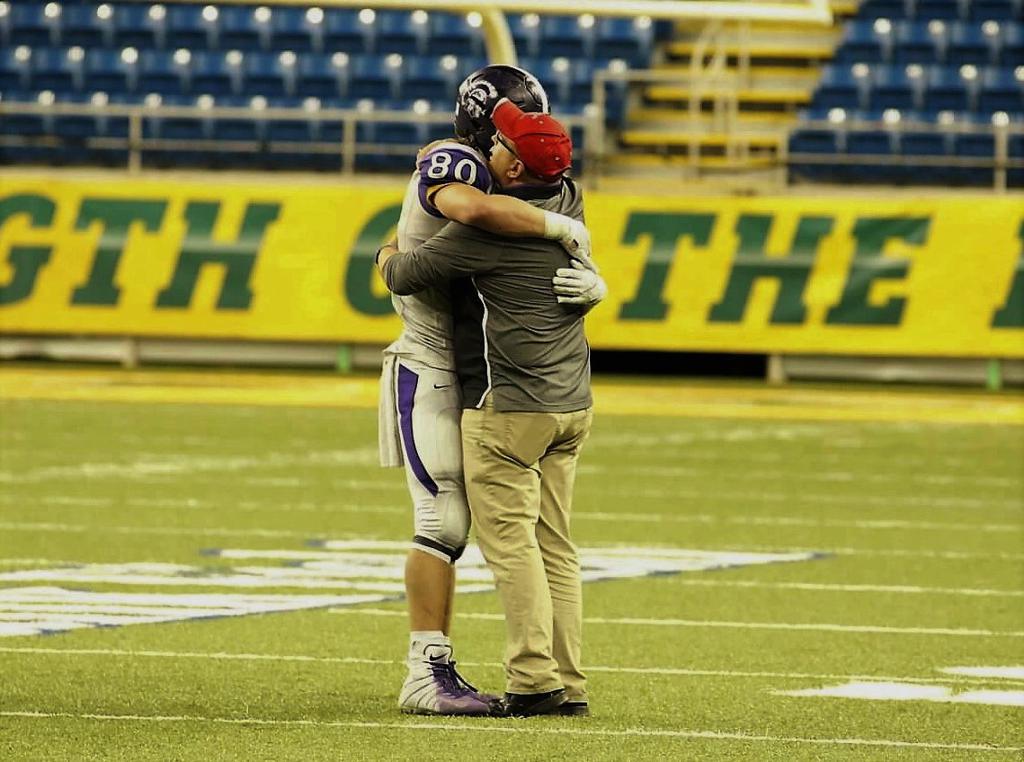 It hit about 9 o’clock on that Saturday night in March, out of the blue, during an evening of camaraderie and conviviality and bingo.

Bryan Strand and his wife, Meg, of Barnesville were with friends in nearby Rothsay, enjoying a night of matching numbers to numbers, when feeling began to leave him. First his right hand, then his right side. Nausea crept up.

“I knew I had to leave,” said Strand, the high school football coach and principal. “But the next thing I knew, I couldn’t stand up. I could barely move. I’m not much of a drinker, but people were looking at me like I was drunk.”

Leave they did, but they didn’t get far when he started to vomit in his truck. “That’s your body’s way of preventing things from getting worse,” he said.

Home in Barnesville was 15 miles away, but he and Meg didn’t get that far. With Bryan drifting in and out of consciousness, Meg pulled over their truck and called 911. An ambulance arrived and took him to a trauma center in Fargo.

After he arrived at the emergency room, it was determined Strand had suffered a stroke, which rarely happens to people in their mid-40s and in good health.

“They got me in the two-hour time frame that’s important when you have a stroke. I spent Saturday night in a hospital bed.”

A camera was inserted to take pictures of his heart. It found that Strand had a hole that had been there since birth.

“It allowed a clot to pass through and in my case, it traveled to the brain,” Strand said. 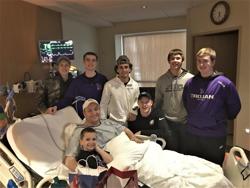 Barnesville coach Bryan Strand in his hospital bed after his stroke last March. With him is his son and some of his football players. Photo courtesy Hunter Zenzen

The health setback came as Strand had big plans. For his football team, there was morning weight training to watch over and a new offense to install and players to mentor. Not to mention a school of about 450 students in grades six through 12 to shepherd.

A number of his players visited him in the hospital. After they shared the usual greetings and concerns, the topic of football came up.

“At the time, we knew that Hawley was going to be good,” Zenzen recalled. “He asked us how far we wanted to go. He said if we want to beat them, we have to get in the weight room. That’s what was on his mind at the time.”

At home in Barnesville, about 200 miles northwest of Minneapolis, it was difficult for Strand to sit still and relax. Meg sought to keep him in line, although she wasn’t always successful.

Once, the Strands needed chairs from the attic. Meg discovered Bryan, despite constant light-headedness, perched atop a ladder getting them down.

“She didn’t think I should be doing that, telling me to get down,” he said. “But I’m a do-it-myself type of person. I’m stubborn.”

Though Strand wanted to get back to work as soon as possible, it was three weeks before he could set foot back in school. Those feet were assisted by a cane.

“I wasn’t able to drive until maybe the end of April,” he said. “It was hard not being independent.”

The Strands’ two older sons — they have four — immediately came home from college to help out. Neighbors chipped in, cleaned the house and cleared his driveway. Even students at school ‘‘were great,” he recalled. “I think I had one kid sent to the office for the rest of the year.”

Then there’s football, the driving force in Strand’s life, his passion.

“Does it take my mind off what happened? Absolutely,” he said. “I’m excited when I think about football and don’t have to think about other stuff.”

There’s still recovery to do. The rush of the Trojans’ season-opening victory over Dilworth-Glyndon-Felton made Strand a little dizzy, forcing him to sit down instead of celebrate. He takes an aspirin and cholesterol medication every day.

He’s scheduled to have surgery on Dec. 3 to close the hole in his heart. It’s been pushed back twice because of football commitments, including his team’s playoff run to the Prep Bowl on Friday. He also plans to travel to Missouri to watch his son Michael, a defensive back at MSU, Moorhead, in the Dragons’ final game of the year.

His stroke was part of a particularly difficult year for the school and his team.Last winter a former student athlete and well-liked coach, Jaynie Halvorson, died in a car/truck collision outside Hawley. Her death, combined with the shock of Strand’s stroke, cast a pall over the team.

Starting running back Jackson Wahl was lost for the season with a torn ACL in his knee. Then starting quarterback Adam Tonsfeldt broke his hand and missed the first six games of the season.

“We said ‘Wow, how are we going to do this?’ ” Zenzen remembered.

They did it by leaning on each other and rallying about others who had faced hardship. It didn’t hurt that Strand found time to install the now-trendy power-T offense that took root at Elk River and is now spreading.

That offense gashed Minneapolis North in the first half of the Class 2A semifinal last Friday, leading to a 34-20 victory. Next up on Friday is heavyweight Caledonia, winners of 53 consecutive games, including the last three state titles.

Win or lose, however, it’s difficult for Strand to believe that things that seemed so wrong mere months ago could turn out so right.

“Everybody here takes such pride in the football team and the community,” he said. “It’s been unbelievable.” 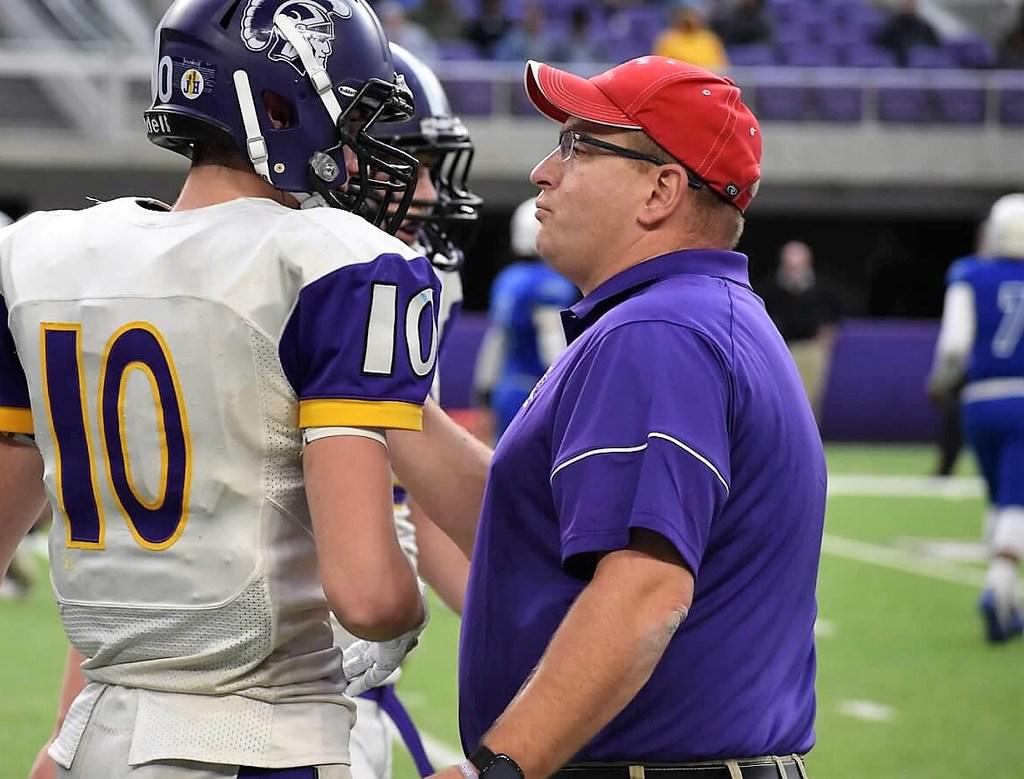 Barnesville coach Bryan Strand gives instructions to one of his players, Kellen Hinsz, during the Trojans' 34-20 victory over Minneapolis North in the Class 2A semifinals. Photo: Holly Inninger