The undefeated Thunderbirds rolled to a 38-0 victory in the Class 1A semifinal but how both teams got there is a win for both sidelines. 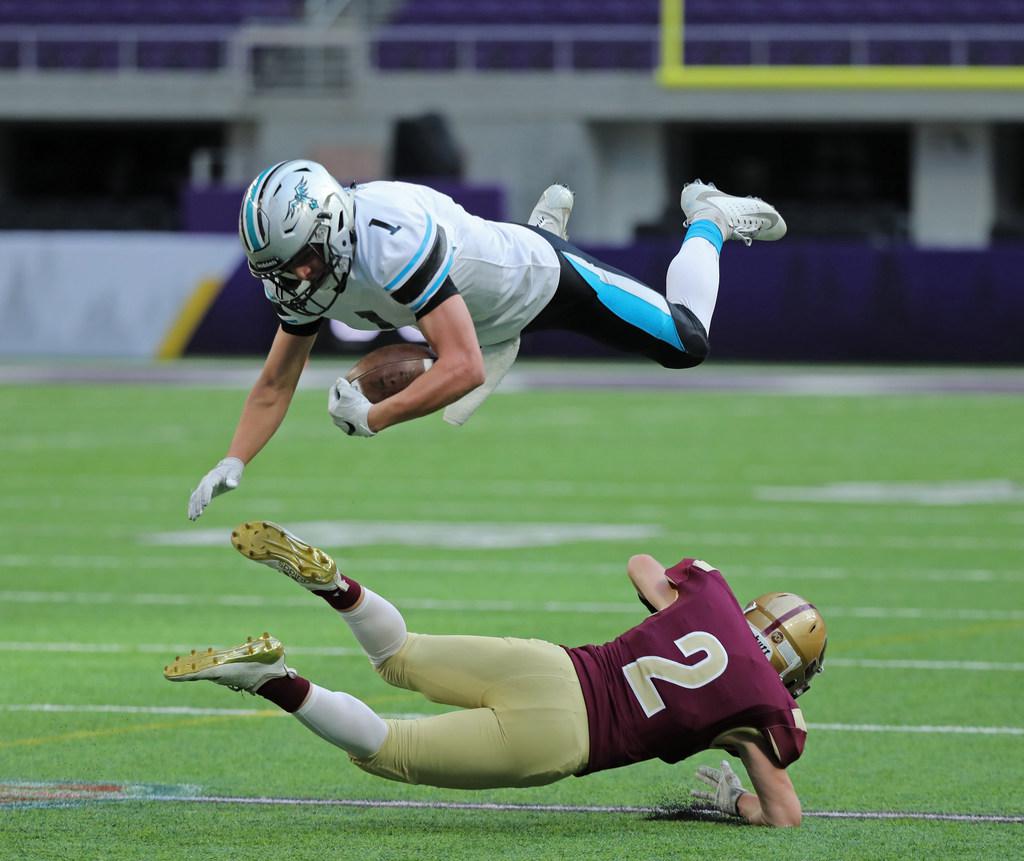 Mahnomen/Waubun's Parker Syverson (1) was tripped up by Springfield's Tori Helget (2) in the first half. Photo: Shari L. Gross • shari.gross@startribune.com

Mahnomen-Waubun (12-0) won its Class 1A semifinal game Saturday, as expected, shutting out Springfield (8-5) 38-0. The Thunderbirds controlled play from the outset, scoring on their first three possessions and taking a 31-0 lead at halftime. They rolled up 299 yards rushing, led by quarterback Jon Starkey’s 77, and displayed a passing game few had seen to this point. Starkey completed four of seven passes for 212 yards and two touchdowns.

The defense was just as good, shutting out its second consecutive playoff opponent for its seventh of the season.

But the stories of both teams, more than simply wins and losses, are about kids and their remarkable ability to adapt.

Springfield played its entire season on a makeshift patch of turf between the junior high baseball and softball fields after its football field was washed out due to summer floods in southern Minnesota. The scoreboard was temporary, the press box a rented scissor lift, the practice field wherever one could be found.

“It’s a neat story,” Springfield coach Bob Fink said. “Practicing on a golf course, at an airport, inside a little gym, a big gym, all over the place. We hauled a trailer from practice to practice and these kids never complained once.”

Becoming a unified team, coach John Clark Jr. said, was smooth, thanks to his players.

“The kids made it easy,” said Clark, who had spent the previous 17 seasons at Mahnomen. “The alumni and the administration and some of those logistics were a little difficult to iron out. The senior leaders made it easy for us. It didn’t take long to see that we were a team.”

Mahnomen/Waubun did exactly what it had done all season in defeating Springfield 38-0 in the Class 1A semifinals: Score often and keep the other guys from doing the same.

The Thunderbirds (12-0) rushed for more than 250 yards and got 138 yards passing from quarterback Jon Starkey. The defense did its part, registering its seventh shutout of the season.

Mahnomen/Waubun will be playing for its ninth state championship when it meets BOLD next Saturday in the Prep Bowl.