Third-quarter surge propels BOLD past Blooming Prairie in 1A semifinal

Three touchdowns in a six-minute span keyed a 37-7 victory for the Warriors in the battle of two undefeated teams. 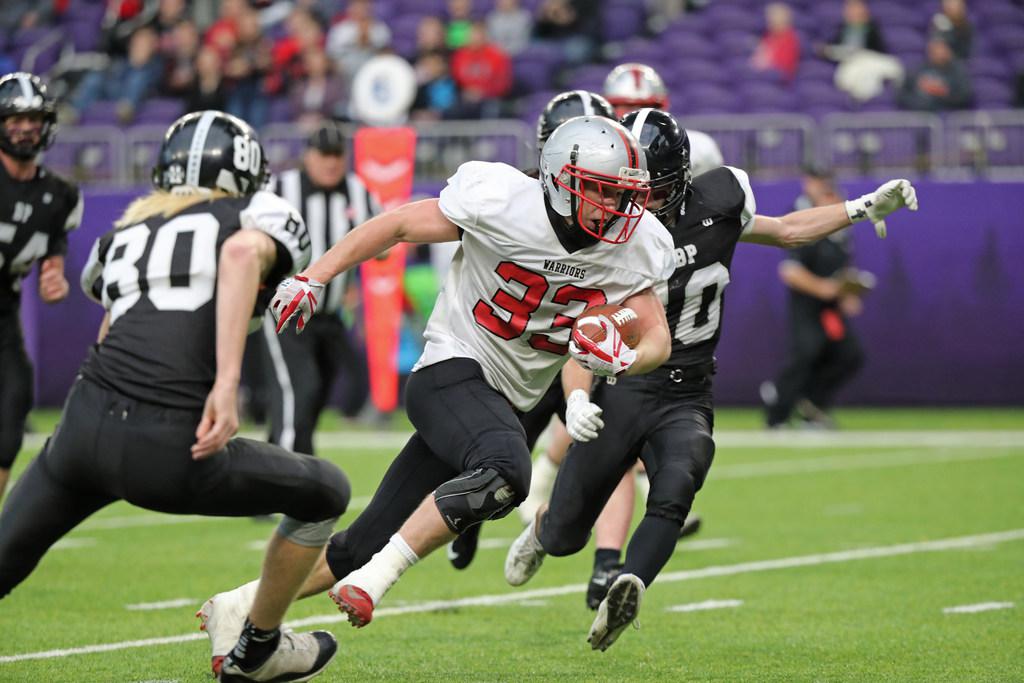 BOLD running back Dawson Vosika (33) ran for a gain in the first half against Blooming Prairie. Photo: Shari L. Gross • shari.gross@startribune.com

Having won its first 12 games this season by a margin of 49.3 points per game, BOLD probably hasn’t had to face much adversity on the football field.

The Warriors showed on Saturday during the first half of their 37-7 victory over Blooming Prairie that they can handle it.

The Warriors lost fumbles on consecutive possessions late in the first quarter in the Class 1A semifinals at U.S. Bank Stadium. But each time they stopped Blooming Prairie on downs in the red zone to maintain their 3-0 lead.

The Warriors (13-0), who led 10-0 at halftime, then took control with three touchdowns in a six-minute span in the third quarter. The third touchdown was a 36-yard fumble return by Anthony Maher. The Warriors’ defense came up with a key interception in the fourth quarter to fend off the previously undefeated Blossoms (12-1).

“We didn’t worry in the first quarter,” BOLD quarterback Jordan Sagedahl said. “We talk every week about handling adversity and to handle it well. We did that today.”

“Our team has been so unselfish,” Sagedahl said, “We don’t care who gets the ball. He (Ryan) told me, ‘I don’t care if I get doubled up, if it opens up things for others.’”

Kaden Thomas passed for 201 yards and a touchdown for the Blossoms.

BOLD took control with three touchdowns in a six-minute span in the third quarter and went on to defeat Blooming Prairie 37-7 on Saturday in the Class 1A semifinals at U.S. Bank Stadium.

Blooming Prairie, which trailed 10-0 at halftime, recovered an onside kick to open the second and drove for a touchdown to pull within 10-7 with 8:52 left in the third quarter.

One minute after Sagedahl’s second touchdown had given BOLD a 23-7 lead, BOLD’s Anthony Maher returned a fumble 36 yards for a touchdown to make it a 30-7 lead.

BOLD extended its lead to 37-7 midway through the fourth quarter on a 7-yard touchdown run by Tim Peppel.

BOLD (13-0) will play either Mahnomen/Waubun or Springfield for the 1A championship next Saturday. For BOLD coach Steve Solem, who has announced he is retiring after 33 seasons, it will be his sixth trip to a championship game. BOLD won state titles in 1990 and 1991 and was the runnerup in 1992, 1998 and 2014. The west-central Minnesota school encompasses players from Bird Island, Olivia and Lake Lillian District.

The loss was the first of the season for Blooming Prairie (12-1).