The Trojans scored twice in the first seven minutes to assert control en route to a 34-20 victory. 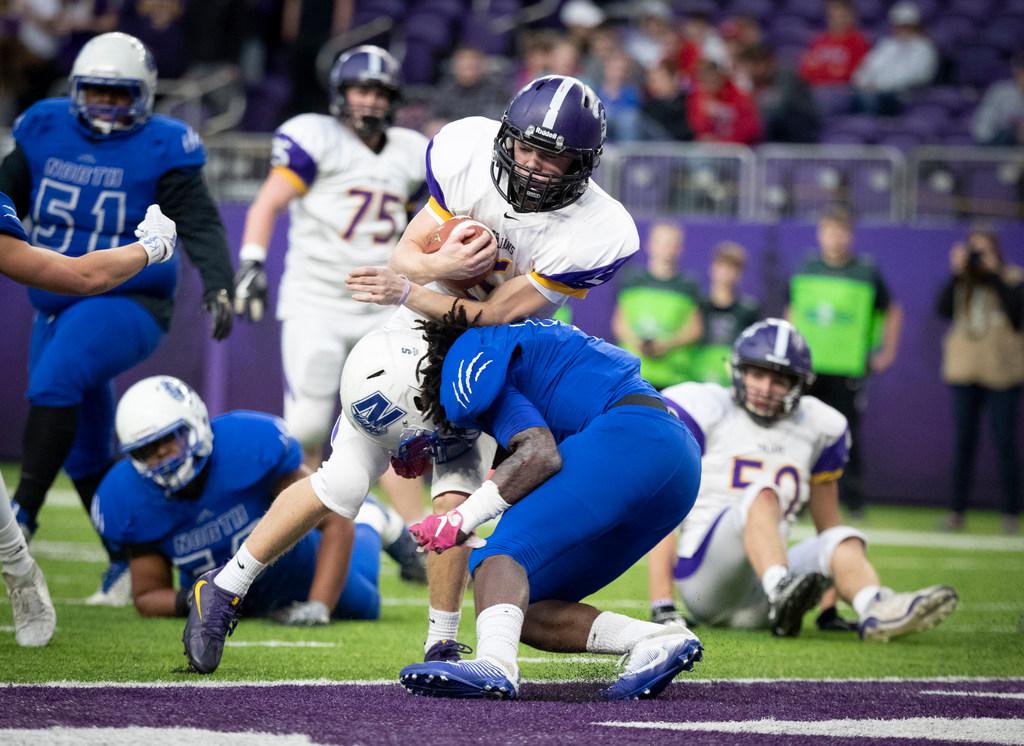 Barnesville sophomore Adam Tonsfeldt, a starting point guard on the basketball team since he was in eighth grade, hadn’t played quarterback before this season. But he’s a natural leader with teammates who respond to him, according to his coach, Bryan Strand.

“I pulled him in last year and I said, ‘You’re going to be the quarterback next year,’” Strand said. “He’s a 10th-grader, and he plays like a senior.”

Tonsfeldt helped lead a powerful Barnesville (11-2) offense to a dominating 34-20 victory over previously undefeated Minneapolis North in the Class 2A semifinals Friday at U.S. Bank Stadium.

Tonsfeldt rushed for 99 of Barnesville's 366 yards. His passing stats? Zero-for-zero as the Trojans ran 59 times for 366 yards compared to just 147 rushing yards for Minneapolis North.

Barnesville senior Preston Snobl set the tone for the game when he returned the opening kickoff 43 yards into Polars' territory. That help set up his 6-yard touchdown run for a quick 8-0 lead. The Trojans made it 16-0 about three minutes later, capitalizing on a Minneapolis North fumble.

Tonsfeldt, who came back in week six after breaking his hand early in the year, credited the offensive line and the coordinator’s play-calling in Friday’s game.

“We popped some right away,” Tonsfeldt said. “(Minneapolis North) had a tough time finding the ball. We were consistently getting four yards, five yards, six yards. … And when you do that, you’re going to move the sticks, and you’re going to keep the chains rolling.”

The Trojans held the ball for 30 minutes, 8 seconds compared to just 17:52 for Minneapolis North. Keeping the ball out of the hands of the high-powered Polars offense was part of the plan, Strand said.

“If we’ve got the ball, they can’t score,” Strand said. “And we used the game clock. Got it down to five seconds almost every time because we weren’t going to give them time.”

In Barnesville’s two losses this season, they lost by one point each to Hawley and Breckenridge. The 34 points by Barnesville were the most Minneapolis North (11-1) has allowed in a game all season.

“They came out playing tough, scored right away and they stayed consistent,” Minneapolis North coach Charles Adams. “If you’re not gap disciplined, not on your responsibility, it’s tough to stop, as you can see. We weren’t disciplined on defense.”

North sophomore quarterback Zach Yeager connected with senior Nasir El-Amin on touchdown catches of 48 and 44 yards near the end of the first half and on the opening drive of the second half. Senior Kehyan Porter capped an 88-yard drive in the fourth quarter with a 2-yard touchdown run.

The Polars just came out too slow to start the game, according to Yeager.

“Second half, we were really doing what we needed to do, but we’ve just got to get that going earlier,” Yeager said.

The Trojans will face three-time defending Class 2A champion Caledonia in the Prep Bowl on Friday. Caledonia defeated Barnesville 55-20 in the 2016 state semifinals.

Barnesville returns to the title game for the first time since it finished as the Class 1A runner-up in 2010.

Barnesville will get a chance to win a Class 2A title after defeating previously unbeaten Minneapolis North 34-20 on Friday in the semifinals at U.S. Bank Stadium.

Barnesville (11-2) grabbed a 16-0 lead less than 7 minutes into the game against North. The Trojans ran the ball and got touchdown runs from four players on their way to victory at U.S. Bank Stadium.

Barnesville’s Preston Snobl ran back the opening kickoff 43 yards to get into North territory to start the game. It set the tone for the first half as Barnesville reached the end zone four times with a few big-yardage plays and capitalizing on two North fumbles.

Barnesville’s only losses this season were by one point each to Hawley and Breckenridge.

The 34 points by Barnesville are the most North (11-1) has allowed in a game all season.

The Polar offense struggled to get much going against a stifling Barnesville defense.

The Trojans will face three-time defending Class 2A champion Caledonia in the Prep Bowl next week.

Caledonia defeated Barnesville 55-20 in the 2016 state semifinals. Barnesville returns to the title game for the first time since it finished as the Class 1A runner-up in 2010.