By way of Eagan and Champlin Park, Izaiah Yeager and younger brother Zach are the starting center and quarterback for the undefeated Polars. 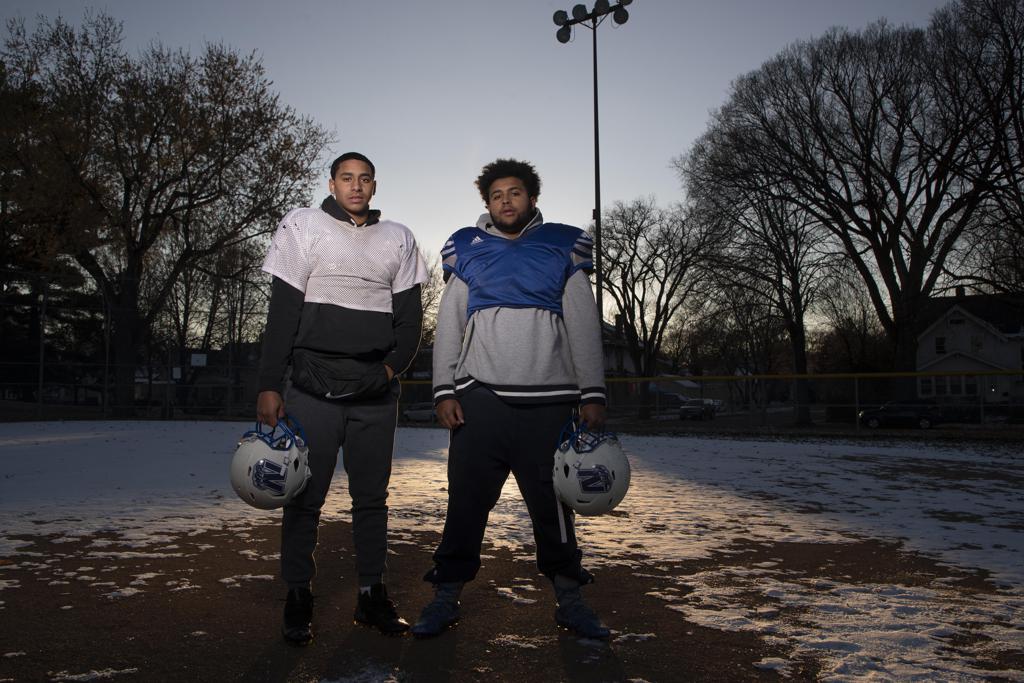 Minneapolis North brothers Zack, left and Izaiah Yeager have found the school fit they were looking for and now are with a Polars' team one game from the Prep Bowl. Photo: Jerry Holt ï Jerry.holt@startribune.com

But here they are. Izaiah, a senior center, heaves shotgun snaps to Zach, a sophomore quarterback, for a Polars team that faces Barnesville at 11:30 a.m. Friday in the Class 2A semifinals at U.S. Bank Stadium.

The Yeagers’ quest for the right cultural and football fit for their school careers carried them from Eagan, where Izaiah attended as a freshman, to Champlin Park, where Izaiah spent two years and Zach one, to Minneapolis North.

The brothers, in their first season as varsity teammates, have Minneapolis North (11-0) on the cusp of its third Prep Bowl appearance in four years. They are also educating doubters.

“People were shocked,” Izaiah said. “They were like, ‘Why are you doing that?’ But walking in, I felt welcomed right away. It happened for a reason and I’m thankful.”

Said Zach, “There are a lot of stereotypes about North, a lot of negative stuff that people think. But it’s way different on the inside. North Minneapolis is all a big family. Everybody knows everybody here.”

The Yeager brothers are biracial, born to an African-American father and Jewish mother. They grew up in Eagan but for Izaiah, fitting in wasn’t easy. He longed to see faces more like his own.

“I couldn’t really relate to anybody,” Izaiah said. “I came home and told my dad, ‘This is not the right fit for me. I can’t go through school like this.’ ”

Enrolling at Champlin Park in 2016 helped from a cultural aspect. But on the field, Izaiah struggled to crack the varsity lineup as a junior last year. Zach felt frustration not getting a shot at quarterback.

They sought a change and looked at Minneapolis North. Their father, Corey Yeager, now in his fourth year working in the Minneapolis Public Schools’ office of black male student achievement, brought his sons around some of his North students and built some familiarity.

“You best believe football was heavy on my mind and my boys’ minds,” said Corey, who played on the offensive line at Cal State Long Beach and later earned a Ph.D. at the University of Minnesota. “But education was the leading factor in every decision with football just beneath that.”

Corey and his wife, Carrie, who had moved their family from Eagan to Brooklyn Park so the boys could attend Champlin Park, did not hesitate to enroll their sons at North.

“There has been a narrative created but when you go to North and experience the community — my mother said she’s never been around so many young men who were so respectful,” said Corey, also the Polars’ offensive line coach. “We saw past that narrative. It’s not the bars on the windows in the community; it’s the people inside. These are people we want to be around.”

The Yeager brothers are excelling in their roles. Zach became the starting quarterback three games into the season and has thrown for 1,591 yards and 19 touchdowns. Ignoring his cold hands late in last week’s 20-12 quarterfinal victory over Redwood Valley, Yeager hit Nasir El-Amin for an 82-yard, game-winning touchdown strike.

Friday’s game won’t be the first time the Yeager brothers have been on the field at U.S. Bank Stadium. Izaiah was a sophomore who dressed but did not play in 2016 when Champlin Park lost in the semifinals to Eden Prairie. Zach, then an eighth-grader, was a ball boy.

Returning with Minneapolis North, a place where both young men found identity on and off the field, is extra special.