Abe Stoesz passed for 134 yards and a touchdown and rushed for 84 yards and another score in the Wolverines' 42-8 victory. 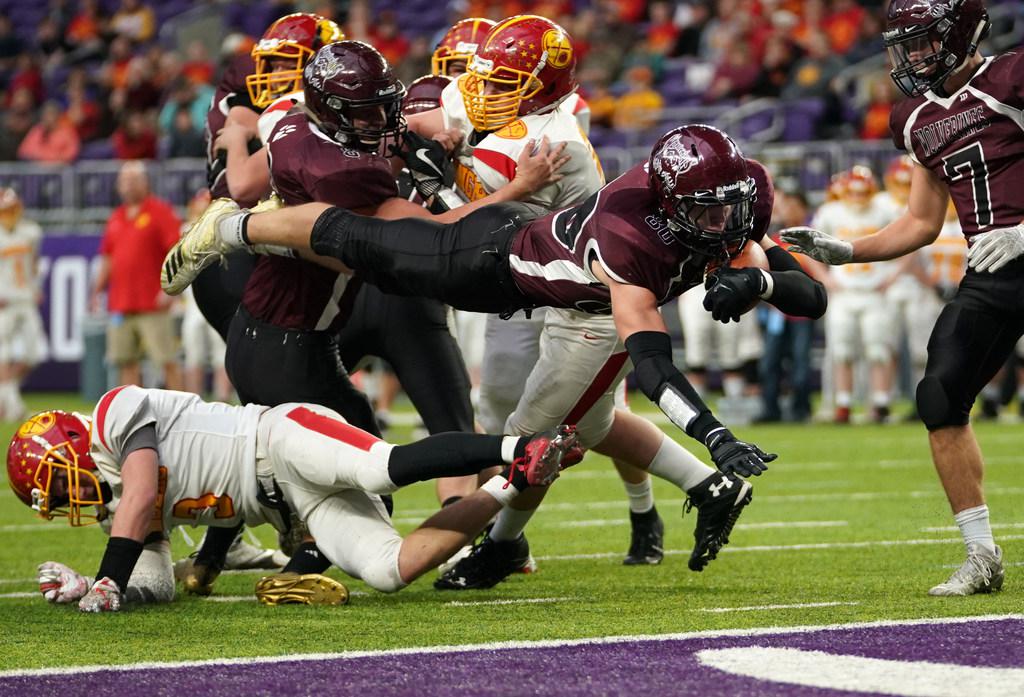 Is it possible that a team playing Nine-Man football can overwhelm an opponent with numbers? That was likely the case in Mountain Lake’s 42-8 romp over Mountain Iron-Buhl in the Nine-Man semifinals.

Mountain Lake (12-0) prides itself on its physical nature, an identity it showed on its first possession Friday. The Wolverines battered the smaller Rangers, driving 75 yards on 11 plays, all runs. The drive ended with a one-yard touchdown run by quarterback Abe Stoesz and early 8-0 lead.

“Our game plan was to get a lead,” Mountain Lake coach Tim Kirk said. “We’ve been behind, I think, just once all year.”

Playing for the first time in U.S. Bank Stadium, Stoesz said he and his teammates had some pregame butterflies, but that quick lead helped them settle down.

“You have a bit of nerves, but once the game starts, you stick your chest out and turn those nerves into pride,” he said.

The lead secured, the Wolverines went about the process of physically dominating Mountain Iron-Buhl. Four of their first five possessions ended in touchdowns, leading to a 29-0 halftime lead. They outgained the Trojans 250-58 in total yards before halftime with a defense designed to bottle up their opponent’s speed.

“We ran into a real tough team today,” Mountain Iron-Buhl coach Dan Zubich said. “They have 33 guys. They have a lot of depth and they wore us down.”

Kirk acknowledged that his team’s numbers advantage worked in its favor.

“We have a very good defense, a very fast defense, and we have some depth,” he said. “That showed today.”

Mountain Lake added another touchdown in the third quarter on an 18-yard pass from Stoesz to Zach Spinks, making the score 36-0. The final quarter was played with running time.

“We’ve got 33 guys on the roster,” Kirk said after the game. “There’s lot of kids that want to be our team that can’t cut it. These guys can and that why we are where we are.”

Mountain Lake scored on its first drive of the game and never looked back, crushing Mountain Iron-Buhl 42-8 in the Nine-Man semifinal on Friday at U.S. Bank Stadium.

Quarterback Abe Stoesz passed for 134 yards and a touchdown and rushed for 84 yards and another score for the Wolverines (12-0).

The victory sets up their first Prep Bowl appearance since 2002, when the school was a cooperative with Butterfield-Odin and played in Class 1A.

Mountain Iron-Buhl, which avoided a shutout with a touchdown with 10 seconds left in the game, ended its season 10-3.