The undefeated Wolfpack, a co-op program of St. Paul Academy, Minnehaha Academy and Blake, will play next week for the Class 4A championship. 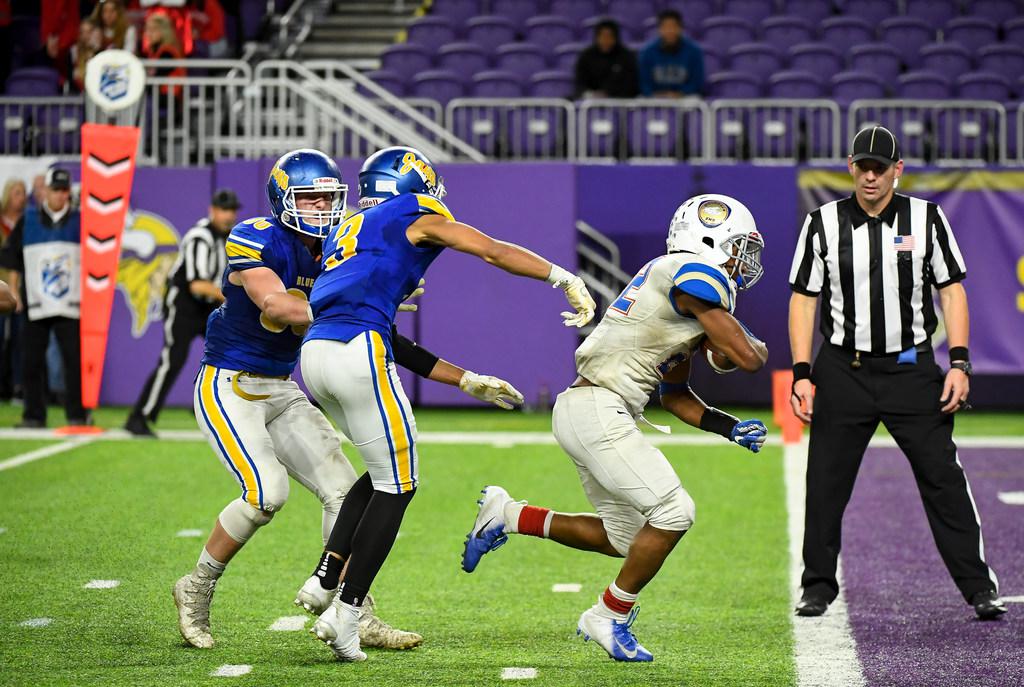 SMB running back Siegel Howard (22) scored a rushing touchdown against Waseca in the second half Thursday. Photo: Aaron Lavinsky ¥ aaron.lavinsky@startribune.com

Jalen Suggs doesn’t know where it comes from. Natural ability, with an added scoop of football instincts, he supposes. How else to explain his ability to so frequently make something good out of the potentially bad?

The junior quarterback rushed for 77 yards, often when plays were breaking down, and passed for 160 to lift the SMB Wolfpack to a 23-15 victory over Waseca in the Class 4A semifinals.

Repeatedly forced to run for his safety against an aggressive Waseca pass rush, Suggs’ speed and elusiveness frustrated the Bluejays all game.

“He’s unbelievable,” SMB coach Colin Quinn said. “He got a first down on one fourth-down play, I don’t know how he possibly did that.”

“I just try to play on instincts,” Suggs said. “I’ve been playing this game since I was 4 years old.”

After a tightly contested first half that ended with SMB leading 10-7, Waseca made a statement. The Bluejays took the second-half kickoff and drove 80 yards in seven plays, capped by a 25-yard touchdown reception by Malik Willingham on a third-and-13 play.

SMB reached the Waseca red zone on its next two drives, but turned the ball over twice. Each time, the Wolfpack defense rose the occasion, getting back-to-back three-and-outs.

“We rely on our defense,” junior cornerback/wide receiver Craig McDonald said. “Every game we make mistakes, but we fight every game and we keep fighting.”

The Wolfpack regained the lead 16-15 on a two-yard run by Siegel Howard, leading to the most crucial stretch of the game.

Waseca blocked a punt on SMB’s next drive, taking over at the Wolfpack 20. On the next play, SMB linebacker Kaden Johnson stormed in and hit Waseca quarterback Hunter Rodriguez as he was throwing. The ball squirted into the hands of SMB lineman Andrew Mollison, ending Waseca’s threat.

“We thought we had a play that was going to hit, but we didn’t get the backside blocked and there was a turnover,” Waseca coach Brad Wendland said. “That was a key moment in the game.”

On the next play, Suggs threw a long pass that was snagged by Johnson for a 53-yard gain. Howard, who finished with 123 yards rushing, sprinted into the end zone from 15 yards out on the next play, giving SMB (12-0) an eight-point lead.

SMB, a fourth-year cooperative of players from St. Paul Academy, Minnehaha Academy and Blake, will play next week in its first Prep Bowl.

Jalen Suggs' legs and right arm, along with some strong running by Siegel Howard, lifted the SMB Wolfpack to a 23-15 victory over Waseca in the Class 4A semifinals.

Suggs, the junior quarterback, repeatedly rescued the Wolfpack from trouble with his ability to turn potential losses into significant gains. He also heaved a 53-yard bomb to tight end Kaden Johnson, setting up a 15-yard touchdown run by Howard that gave the Wolfpack breathing room at 23-15.

Howard finished with more than 120 yards and two rushing touchdowns.

SMB, a fourth-year cooperative program made up of players from St. Paul Academy, Minnehaha Academy and Blake, will play next week in its first Prep Bowl.