Quarterback Alex Folz threw four touchdown passes and ran for three scores to lead the defending champions back to the Nine-Man Prep Bowl. 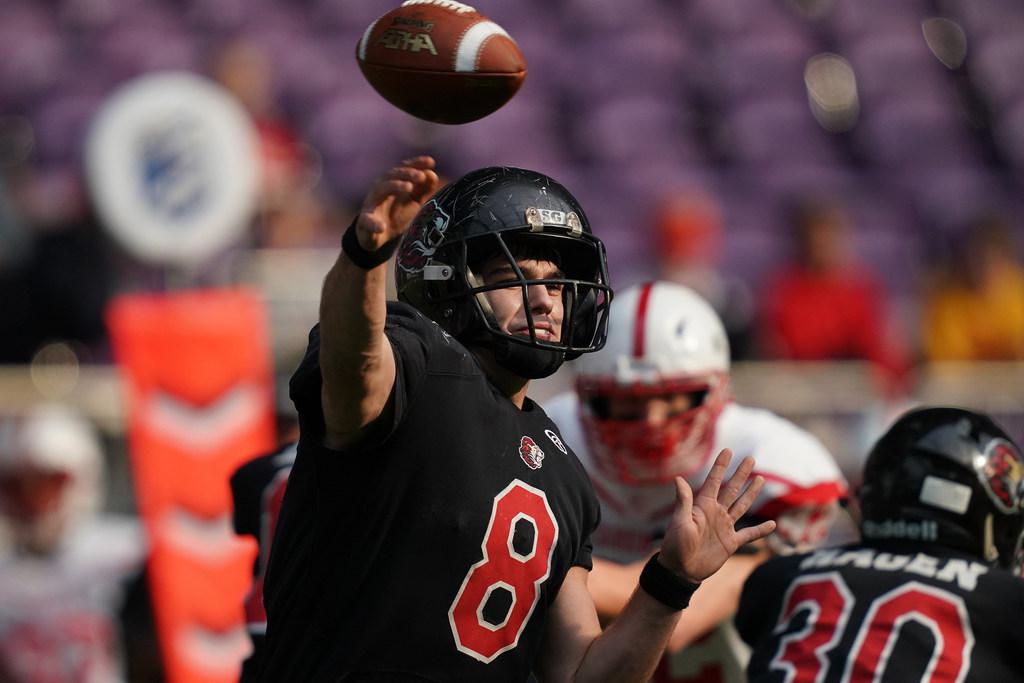 The defending champion Lions nearly let their title defense slip through their fingers, literally, in a last-second comeback victory over Russel-Tyler-Ruthton in the Nine-Man quarterfinals. They weren’t going to let it happen again.

Led by senior quarterback Alex Folz, Spring Grove broke out with 28 first quarter points and cruised to a 48-12 victory over Cromwell-Wright in the Nine-Man semifinals Thursday at U.S. Bank Stadium.

Folz, who was recently selected as a Mr. Football finalist, completed 25 of 34 passes for 368 yards and four touchdowns. He added 85 rushing yards and three more touchdowns as Spring Grove (13-0) ran its winning streak to 27 games.

“We knew we wanted to play fast and jump out to a lead against a power running team,” Spring Grove coach Zach Hauser said. “Cromwell hadn’t faced a spread offense all year. We threw a couple of different formations against them and went on from there.”

Spring Grove turned over the ball seven times in the quarterfinals while playing in last week’s wintry conditions. Playing in weather-proof conditions at U.S. Bank Stadium, the Lions were determined not to have a repeat.

“You turn the ball over seven times, you usually don’t win a football game,” Hauser said. “That was uncharacteristic of these guys. We wanted to make sure we took care of the football.”

Spring Grove scored on its first four possessions. All three of Folz’s touchdown runs came in the first quarter, with a 44-yard scoring pass from Folz to Kai Bjerke thrown in for good measure.

At the same time, Cromwell-Wright was unable to generate much offense. The Cardinals didn’t gain a first down until midway through the second quarter.

Learning from last year, Folz said, made a difference Thursday.

“We wanted to start fast,” Folz said. “In the [2017 state championship game], we jumped out and took a 32-0 win. In the two games before that, the other team scored first and we had to fight back. We know we don’t want to start down. We want to be the aggressor and make teams play from behind.”

Spring Grove stormed out with a 28-point first quarter and cruised to a 48-12 victory over Cromwell-Wright in the Nine-Man semifinal on Thursday at U.S. Bank Stadium.

Cromwell-Wright (12-1) was held without a first down until midway through the second quarter. The team played without it starting quarterback, Drew Libbon, who was injured in the section finals.