The Cougars overcame a 1-5 start by getting the hang of an old-style offense that has knocked off three higher-seeded opponents. Next up is crosstown rival Lakeville North, the No. 1-ranked team in the state. 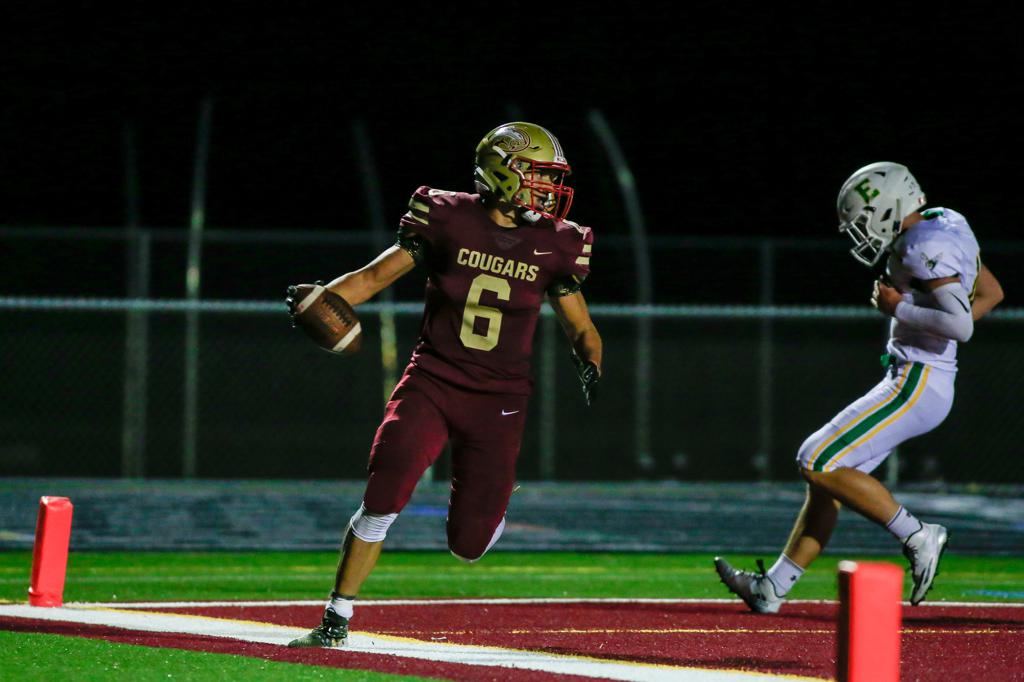 Tavian Laden (6) caught a 23-yard pass for Lakeville South's only touchdown in a season-opening loss to Edina. The offense became much more productive since the seventh game of the regular season against Shakopee. Photo by Mark Hvidsten, SportsEngine

It was a simple matter of direction. Lakeville South coach Tyler Krebs and his coaches were tired of going backward. Something had to change.

“Last year, we had a negative 400 yards on rushing plays,” Krebs recalled. “We’d been competitive on defense, but we figured we can’t go backwards on offense.”

So last January, Krebs contacted Elk River coach Steve Hamilton about the Elks’ straight-T offense, which is as prolific as it is old-school. Krebs and his staff installed the offense, which combines hard and quick offensive line play with a deceptive running game. It features all three running backs attacking gaps, leaving it up to the defense to sort through the sea of bodies to find the ball carrier. Backs hit the holes quickly, leaving little chance for lost yardage and increasing the chance of a big play.

“When Krebs first told us, we were all skeptical,” senior running back Tavian Laden said. “But then he showed us Elk River’s film. We didn’t know who had the ball 99 percent of the time. We all got super excited because we wanted that to happen for us, too.”

Things were slow at first. Three quarters of the way through the regular season, Lakeville South was 1-5. Kreb could see improvement, but it wasn’t showing up on the field.

Until the Cougars faced Shakopee in the penultimate game of the regular season. Krebs switched quarterbacks, from junior George Brekke to sophomore Reid Patterson. Things coalesced, leading to a remarkable 48-point bonanza in a victory after scoring just 28 total points in the previous four games.

It was followed by a 59-point showing in a victory over Farmington. The trend was turning.

“We got better at running [the offense]. We’re faster, we’re lower, more physical and now the big plays are popping,” Krebs said. “That’s been a difference for us offensively. Now, wer’e getting the 50-yard-run, the 60-yard-run, the 70-yard-run.”

Things have been clicking for the Cougars ever since.

Seeded sixth in their section of Class 6A, Lakeville South knocked off No. 3 seed Cretin-Derham Hall, No. 2 seed Champlin Park and, last Friday, section No. 1 seed Woodbury. The surprising Cougars now face the No. 1-ranked team in the state, crosstown rival Lakeville North, on Friday at U.S. Bank Stadium.

“Against Cretin-Derham Hall, we were faking outside and T.J. Nelson had the whole defensive line and half the defensive backs following him,” Laden remembered. “And you could see Johnny Shabazz just running toward the end zone. It was amazing. You could see all the defensive faces turn white because they didn’t know who had the ball.” 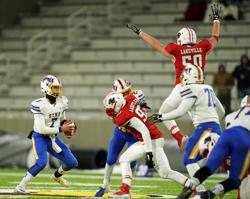 Lakeville North's aggressive defense, shown here against St. Michael-Albertville, is a big reason for it being the top-ranked team in the state. Photo: Anthony Souffle, Star Tribune

The Panthers’ biggest concern, Vossen said, is clock management. Lakeville South’s ground game has the potential to chew up time.

“We don’t anticipate a ton of drives,” he said. “It’s a little like managing the clock against Eden Prairie. They try to use five, six, seven minutes on a drive. We just have to take our time, stick with our game plan and score on more drives than they do.”

One thing is certain: The city of Lakeville, pop. 63,748 according to the city website, is humming with anticipation. In addition to schools being just two miles apart, both coaches are graduates of legacy school Lakeville — it became Lakeville North when Lakeville South opened in 2005. Both played under longtime Lakeville and (later) Lakeville South coach Larry Thompson.

“You can feel the energy. There’s a lot of great buzz around the school,” Krebs said. “I saw one message that said the whole city could fit inside [U.S. Bank] stadium.”

Added Cougars’ running back Jared Stewart: “For me, in my senior year, this is the most exciting thing that could happen.”

Lakeville North has long held an edge over Lakeville South, having won the last eight meetings. It has held the Big Cat Trophy, which goes to the winner of the annual regular-season game, since 2011. Vossen said with the exception of the Prep Bowl, this will be the most anticipated game his team has played.

“It’s no secret the team on the other side of town wants it,” Vossen said. “There’s a different level of excitement as it gets closer.”