After an unusually low-scoring first half, the teams deployed some unusual plays and combined for 20 points in the fourth quarter. 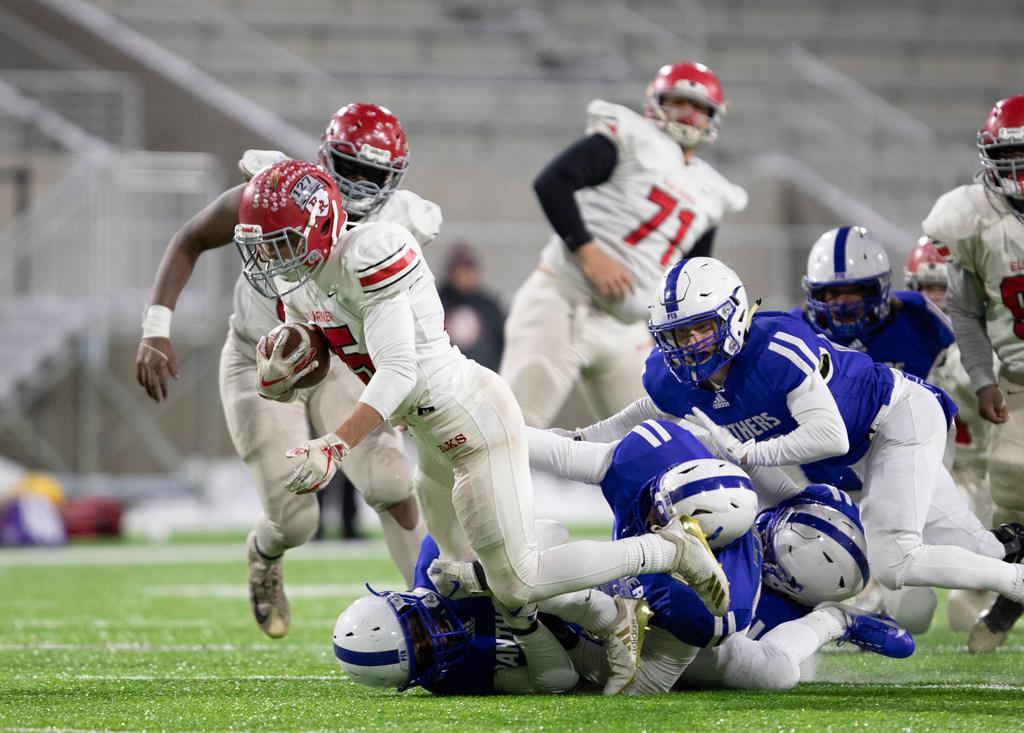 Plays that Elk River and Spring Lake Park repeatedly practice but use sparingly in games made a big difference in their Class 5A state tournament quarterfinal.

Elk River held off the Panthers for a 23-21 victory Saturday at TCO Stadium in Eagan.

The Elks advance to the semifinals and face defending champion Owatonna at 2 p.m. Friday at U.S. Bank Stadium. The teams met in the Prep Bowl last season.

Ranked No. 4 in the state, the Elks (10-1) went ahead 23-14 early in the fourth quarter on a Carter Otto touchdown run and a Nicholas Byrne extra point, the latter a rare call for a team that usually tries two-point conversions.

“I said to [Byrne], ‘You’ve done this before so do it again,’” Elks’ quarterback Tyler Leshovsky said. “He does it all the time in practice. He can kick.”

No. 9 Spring Lake Park (8-3) called a wheel route pass play and ran it to perfection. Quarterback Zach Dunbar and Derric Bergman co-authored a 49-yard catch and run and Elk River’s lead shrank to 23-21 with 2:32 left.

“In a game, we’ve only used it once before,” Bergman said. “I was thinking I had to make a play for my teammates.”

Bergman, serenaded by Panther fans with a chant of “Bergie, Bergie” for his second quarter touchdown, sent the faithful into delirium as he ran down the Spring Lake Park sideline.

With Elk River taking over from its 49-yard line, however, Spring Lake Park needed another unlikely play.

“After I came off the field from scoring the touchdown, my teammate Teshaun Pate came up to me and said, ‘Don’t worry, we’ll get the ball back for you and score again,’” said Bergman, his voice cracking with emotion.

The teams combined for 20 points in the final quarter but Elk River never relinquished its lead.

“We fully expected a battle back and forth,” Spring Lake Park coach John Stewart said. “We wanted to be right there to have a chance and we were.”

Elk River held off Spring Lake Park for a 23-21 victory Saturday in the Class 5A quarterfinals at TCO Stadium in Eagan.

The Elks advance to the semifinals and face defending state champion Owatonna at 2 p.m. Friday at U.S. Bank Stadium. The teams met in the Prep Bowl last season.

Elk River (10-1) went ahead 23-14 in the fourth quarter on a Carter Otto touchdown and rare decision to kick an extra point.

Then a rare Spring Lake Park pass brought the Panthers within reach. Quarterback Zach Dunbar and Derric Bergman combined on a 49-yard catch and run and Elk River’s lead shrank to 23-21 with 2:32 left.

The teams combined for 20 points in the final quarter but Elk River never relinquished its lead.

A relentless 14-play drive put Elk River ahead 16-8 midway through the third quarter. Otto did much of the work throughout the 70-yard march and teammate Arik Nordenstrom finished the job from 1 yard out. Quarterback Tyler Leshovsky sprinted wide for the two-point conversion.

Spring Lake Park (8-3) started its ensuing drive from its 4-yard line and kept the ball the rest of the third quarter. The Panthers, reluctant to throw, completed a pass on fourth-and-15 from quarterback Zach Dunbar to Kaleb Skelly down to the 1-yard line. Brian Orellana-Lopez scored but Leshovsky couldn’t convert on a two-point rush try. That kept Elk River ahead 16-14 with 8:55 to play.

The teams battled to an 8-8 tie at halftime, a swiftly paced 24 minutes of football by two teams that run the ball.

The running backs did most of their work on the lane of green turf cleared of snow between the hash marks before kickoff.

Elk River’s first possession ended with program career-leading rusher Adam Nelson going straight up the middle for 61 yards and a touchdown. Teammate Kevin Egbujor ran in the two-point conversion and Elk River led 8-0 with 6:57 to go in the first quarter.

Then the Spring Lake Park veer-option attack went to work. Bergman scored from 17 yards out and fans serenaded him with a chant of, “Bergie, Bergie.” He gave them more reason to cheer by adding the two-point conversion and tying the game.