3A: Stout, stingy defense gets Rochester Lourdes rolling in 24-0 victory over Jordan

The Eagles recorded their fourth shutout of the season and got rushing touchdowns from Matthew Hayford, Jake Groteboer and Zach Jungels. 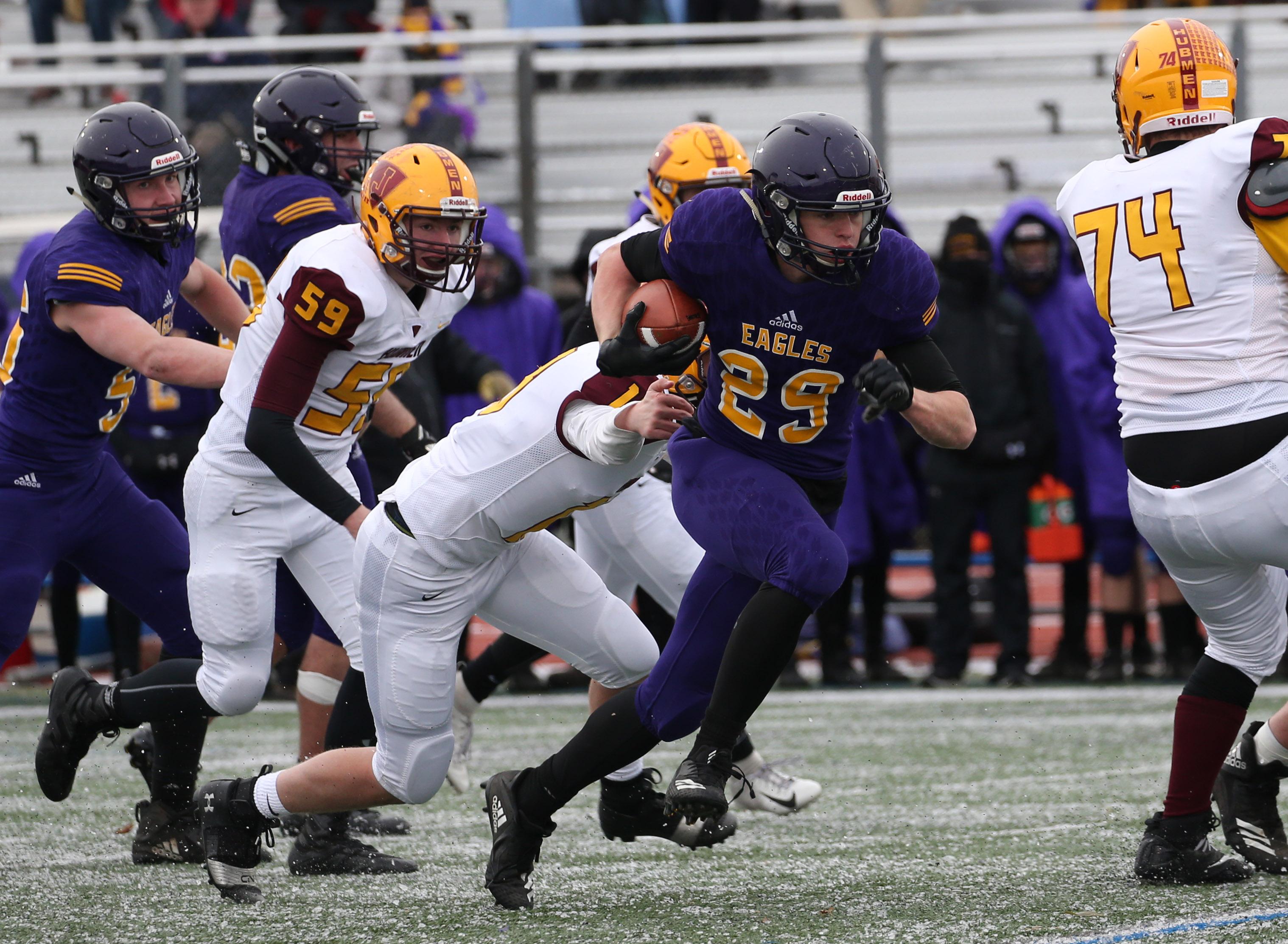 Zach Jungels (29) breaks free of the last tackle for a 33-yard touchdown in the fourth quarter solidifying a 24-0 win for Rochester Lourdes. Photo by Cheryl Myers, SportsEngine

Rochester Lourdes’ first-team defense had allowed just four touchdowns and a field goal heading into its Class 3A quarterfinal matchup against Jordan, according to coach Mike Kesler.

The unit was just as stout Saturday, forcing five turnovers and limiting the Hubmen to one trip into the red zone in a 24-0 victory at Hopkins High School.

Seniors Pat Leary and Trey Billmeier each had two interceptions, and defensive lineman Riley Schaefer unofficially had two sacks for the Eagles (12-0), who won Class 3A titles in 2014 and 2016. 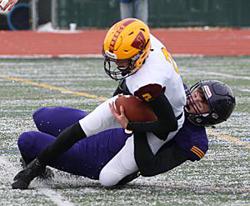 “They’ve led us all year long,” Kesler said of his defense, which has four shutouts this season. “We really needed them tonight, and they just stepped up.”

Rochester Lourdes returned 18 of 23 seniors from a 2017 team that went 9-3 and lost in the state quarterfinals. Its defense has now allowed fewer than 10 points in eight of 12 games, including a shutout in the Section 1 finals.

Leary contributed the unit’s success in part to a great senior class. 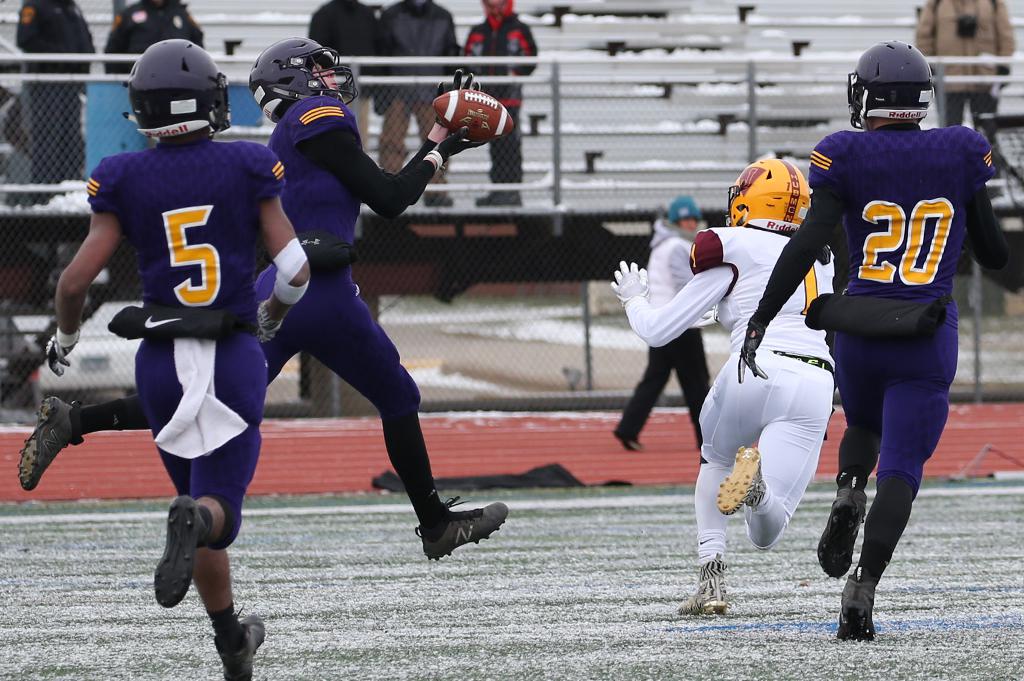 Trey Billmeier reaches for the ball and pulls in one of two interceptions he had in the game. Rochester Lourdes advances to the semi-final round with a 24-0 win over Jordan. Photo by Cheryl Myers, SportsEngine

Rochester Lourdes forced four first-half turnovers and rushed for three touchdowns Saturday in a 24-0 victory over Jordan in the Class 3A quarterfinals at Hopkins High School.

Matthew Hayford, Jake Groteboer and Zach Jungels rushed for scores for the Eagles (12-0), who won state titles in 2014 and 2016 and are making their third straight state appearance. Senior Ben Limburg kicked a 35-yard field goal midway through the third quarter to give the team a three-score lead.

The win marked the Eagles' fourth shutout of the year and their eighth game in which they allowed fewer than 10 points. Seniors Pat Leary and Trey Billmeier each had two interceptions. Defensive lineman Riley Schaefer had two sacks. 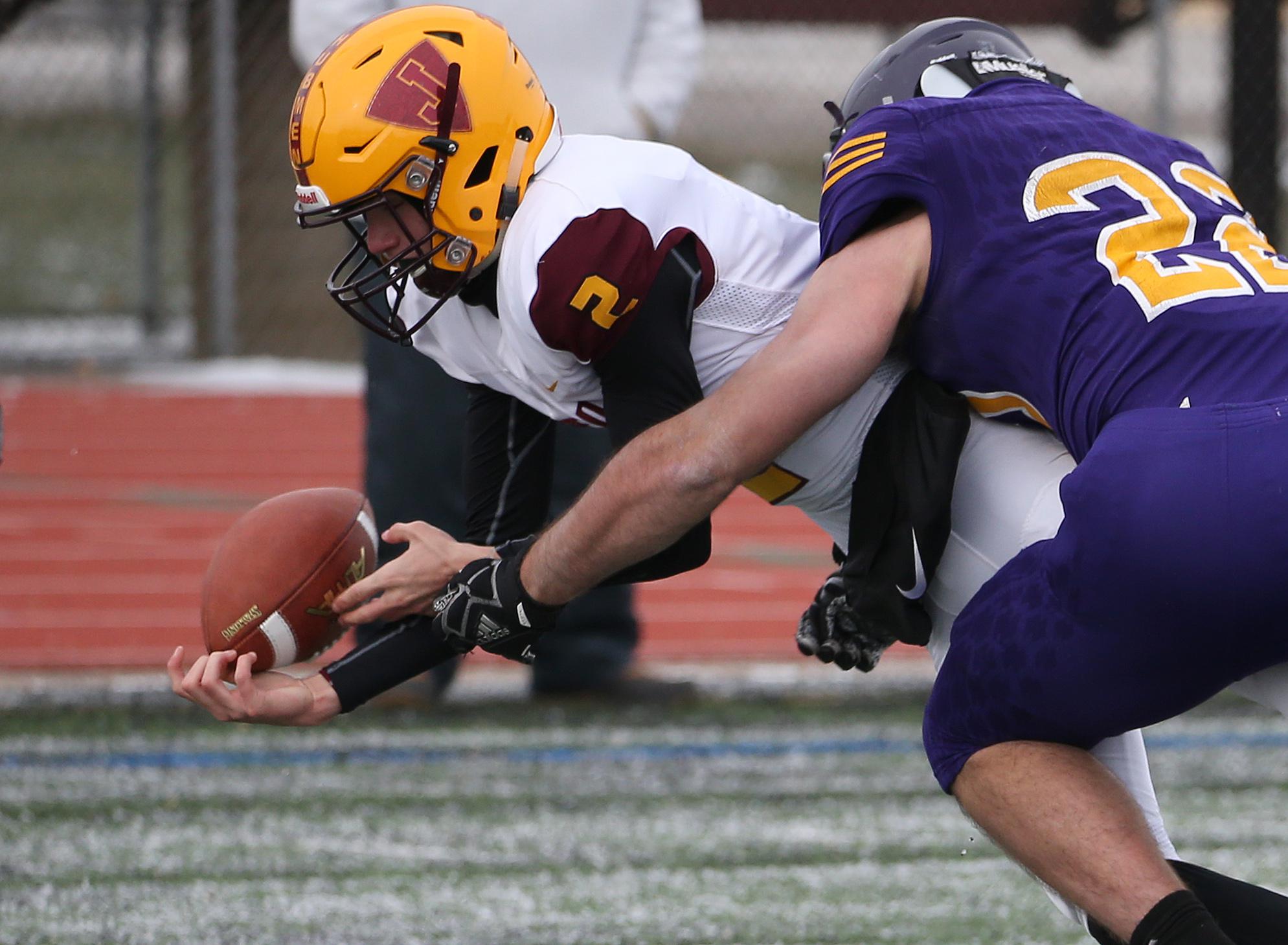 Bryce Sievers (2) is brought down by Jake Groteboer (22) forcing a turnover on the opening drive of the game. Jordan fell to Rochester Lourdes 24-0 after suffering four turnovers in the first half. Photo by Cheryl Myers, SportsEngine