The Hawks rallied to take the lead at halftime but Owatonna, behind five rushing touchdowns by Gopher recruit Jason Williamson, claimed a 42-27 victory. 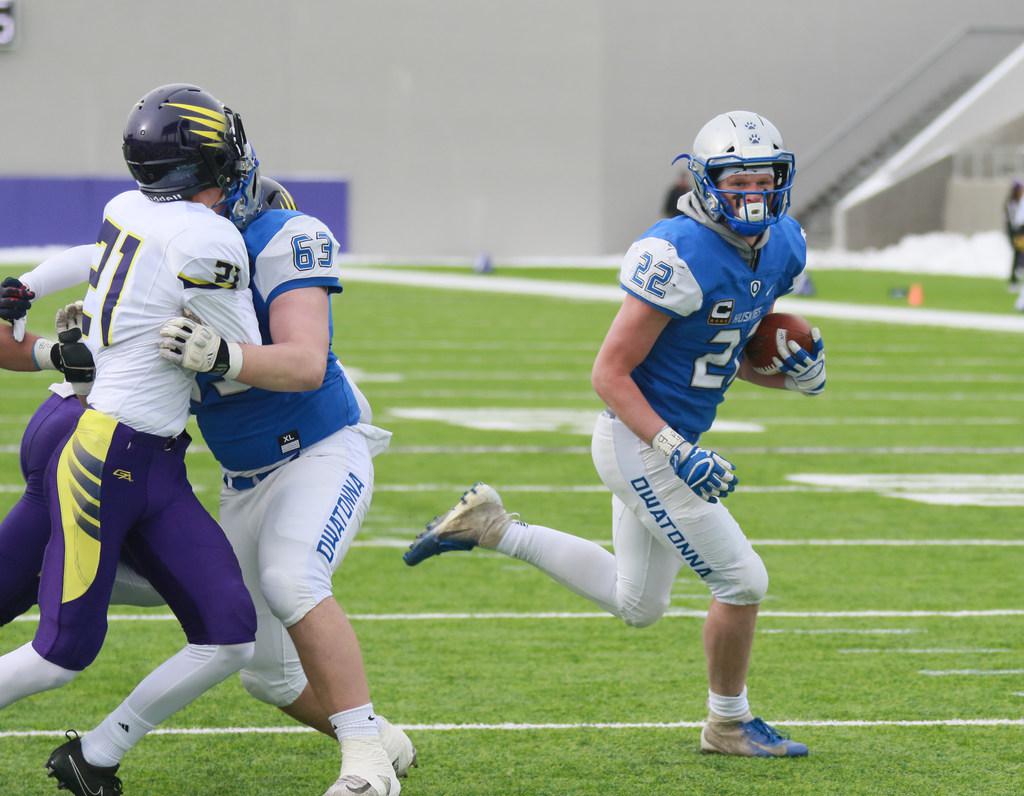 Trailing at halftime for just the second time all season failed to unnerve Owatonna.

The defending Class 5A state champions just needed a reminder of their identity.

“Grind them. Shove it down their throats,” said Lewis, his right hand punching the palm of his left hand for emphasis.

It worked. Owatonna pulled away in a 42-27 victory against Chaska in the first of two state tournament quarterfinals on Saturday at Twin Cities Orthopedic Stadium in Eagan.

Owatonna running back Jason Williamson, who has committed to the Gophers, scored five touchdowns on 39 carries for an unofficial 333 yards.

Dahl’s Hawks emerged from Section 2, perhaps the best in the state, and showed their mettle. Trailing 14-0 after the first quarter, Chaska responded with 17 consecutive points and led at halftime.

Then Owatonna started the third quarter by forcing Chaska (8-4) to punt after its first possession and went ahead to stay on a one-play drive. Williamson dashed 47 yards for a touchdown run and the Huskies had found themselves.

“I feel like that just jump-started us again,” Lewis said.

“They came out and hit us in the mouth in the second half and we didn’t have an answer,” Dahl said.

Owatonna (11-0) turned methodical. Williamson ran seven times for 51 of his team’s yards before Sol Havelka hit Carson DeKam from 13 yards out for a 28-17 lead. He spearheaded the next drive, carrying eight times for all 87 yards a touchdown. His 35th carry of the game produced a 35-20 fourth quarter lead.

Chaska, which had defeated No. 3-ranked Waconia and No. 7 Mankato West to reach the state tournament, couldn’t respond.

“Whoever comes out of our section every year can make a run and put good teams to bed,” Chaska senior quarterback Justin Bach said. “But a lot of credit to [Owatonna]. They played well in the second half.”

As for seizing control, Williamson said, “There weren’t any adjustments, just our coach telling us to play Owatonna football.”

Defending state champion Owatonna found itself in a tight game with Chaska at halftime before pulling away for a 42-27 victory Saturday in a Class 5A quarterfinal at Twin Cities Orthopedic Stadium in Eagan.

Owatonna running back Jason Williamson, who committed to the Gophers, scored five touchdowns on 39 carries for an unofficial 334 yards.

Trailing 14-0 after the first quarter, Chaska responded with 17 consecutive points and led 17-14 at halftime. The Hawks displayed the skills and toughness that got them through Section 2, one of the state’s most difficult.

A 47-yard touchdown run from Williamson on the Huskies’ first second half drive provided a lead they would not relinquish.