The Bengals' 42-14 victory in a Class 6A quarterfinal started on Thursday evening in White Bear Lake, where a power outage forced the game to finish 27 miles away on Friday afternoon. 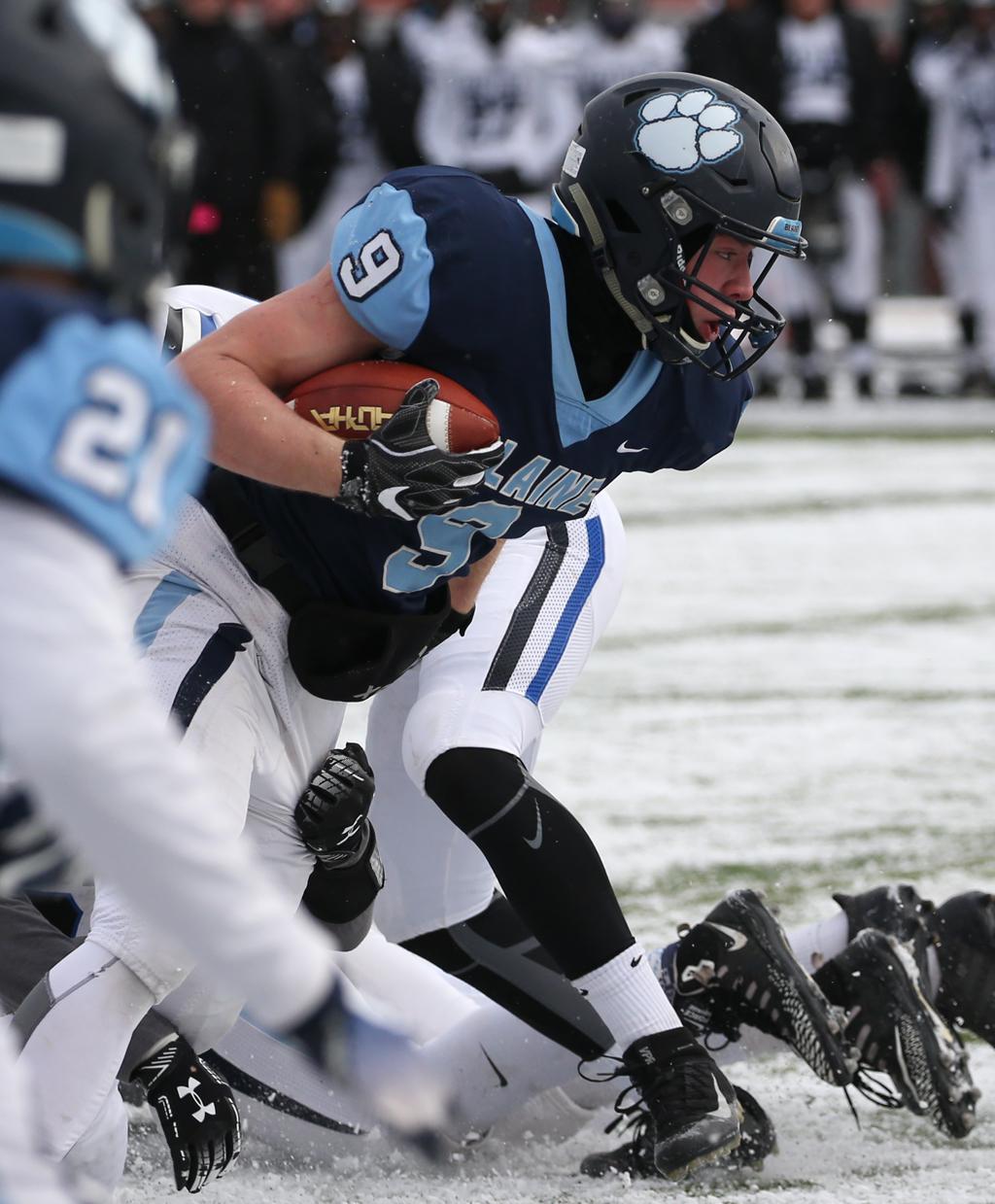 Sophomore running back Will Frederickson carries the ball through the line of scrimmage. Frederickson tallied three rushing touchdowns for Blaine in a 42-14 victory over Eastsview. Photo by Cheryl Myers, SportsEngine

Second-ranked Blaine needed only 19 hours and 27 miles to make short work of upstart Eastview in a 42-14 Class 6A quarterfinal victory Friday.

The game started Thursday night in White Bear Lake and ended in bitter cold winter afternoon sun and shadow at snowy, windy Osseo High School. The change followed an electrical fire that knocked out stadium power at White Bear Lake and halted play just after halftime with Blaine leading 14-2 on a school night. 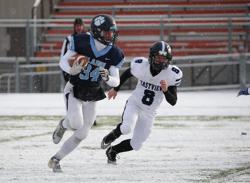 When play resumed in a different place on a different day, Blaine outscored Eastview 28-12 to remain undefeated at 11-0, thanks to two third-quarter touchdowns that included sophomore runner Will Fredrickson’s third TD of the game.

“Not a lot of people have played games like this, if anybody has,” said Fredrickson, the Bengals’ wildcat threat. “I was kind of mad last night. I was like, `Let’s play, I’ll play until 1 in the morning.’ It was weird, but the coaches said just go out and warm up like it’s halftime and let’s get after it.”

It also helped that Eastview began Friday with 10:33 left on the third-quarter clock with a false-start penalty. The Lightning started in reverse while Blaine forged ahead.

“Halftime is the time to make adjustments,” Blaine coach Ben Geisler said. “When halftime is 24 hours long, it’s like, `Oh, buddy, what adjustments are they going to make?’ Momentum is everything in high school. It’s such a short game and then when you cut it in half, one play can make all the difference.”

A long third-quarter punt return and senior Tony Strand’s fourth-quarter interception return for a touchdown provided Blaine with all the momentum it needed.

“They were 10-0 for a reason,” said Eastview coach Kelly Sherwin, whose team started the season 2-4 and then won four games consecutively until Friday. “It’s tough. Those guys are better. They played better than we did. They deserve to move on.”

Eastview played on without tailback Quincy Suggs, who was ejected Thursday after taking a swing at a Blaine defender. “It’s an unfortunate deal,” Sherwin said. “I don’t want to go past that. You move on. Mistakes happen.”

Blaine players and coaches got out of classes at 11 a.m. for the 3 p.m. start at a new venue.

“I wanted to watch film, but I had to do a lesson on covalent bonding and ionic nomenclature this morning,” said Geisler, a chemistry and biology teacher.

“That’s about as surreal a scene as you could have had last night,” Sherwin said. “Today was just weird, weird going to school. You usually don’t start at 1st-and-10, but it’ll be memorable, without a doubt. We’ll never forget this one.” 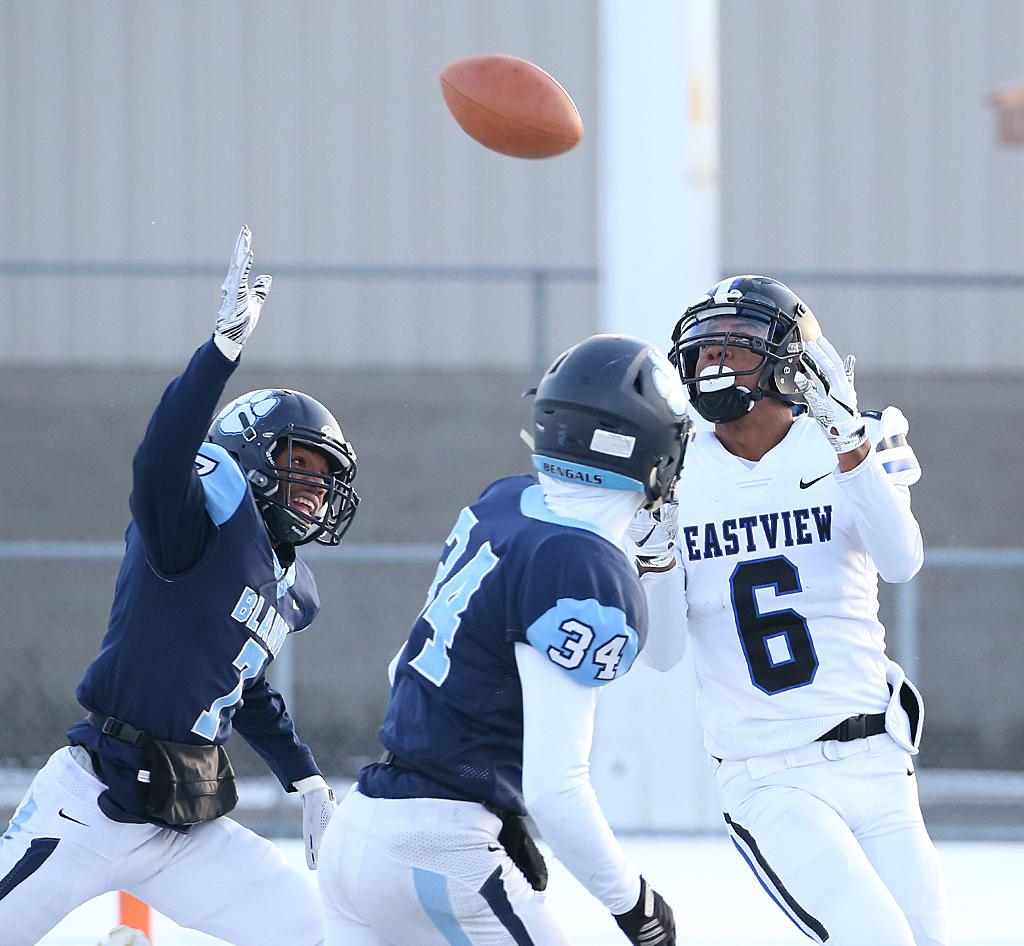 Eastviews Larry Wright (6) pulls in a pass from Erik Reimann for a touchdown late in the game. The Lightning fall to the Bengals in a two day contest by a score of 42-14 at Osseo High School. Photo by Cheryl Myers, SportsEngine

It only took second-ranked Blaine about 19 hours and 27 miles to make short work of upstart Eastview with a 42-14 victory Friday in a Class 6A quarterfinal.

The game started Thursday night at White Bear Lake High School and ended in sun and shade with a cold wind Friday afternoon far away at Osseo High School. A power outage sparked by an electrical fire stopped play very soon after halftime on Thursday evening.

The two teams resumed play with Eastview possessing the ball exactly on the 50-yard line, with 10:33 left in the third quarter.

Blaine led 14-2 at the time after two second-quarter touchdowns came before the lights went out just after halftime. They scored two third-quarter touchdowns to make it four unanswered touchdowns for a 28-2 lead, the last one quarterback Will Fredrickson’s third rushing touchdown of the game.

Eastview scored its only touchdown over those two days with an 11-yard passing play with seven seconds gone in the fourth quarter.

The Bengals finished the 21-hour odyssey by scoring the two more touchdowns in that fourth quarter before Eastview scored the game’s final touchdown on a 30-yard passing play with 3:10 left.