Quarterback Cole Kramer found the snow and cold to the Eagles' liking in a 15-13 victory, even if his coach credited his signal caller and others for the win. 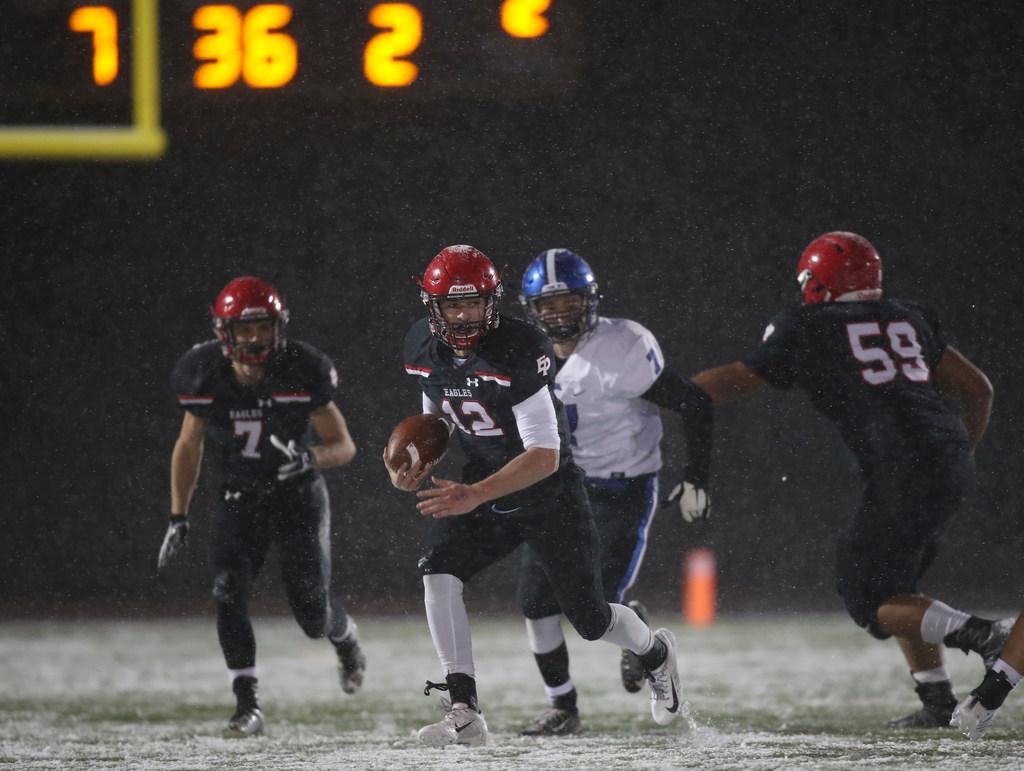 The snow and the cold that descended on the Twin Cities Thursday evening was cursed and cussed by most locals. For the Eagles' football team, it was a thing of beauty.

“This was Eden Prairie weather,” Eagles quarterback Cole Kramer said. “We ran the ball really well and when we had to, we passed it well. We executed to the best of our abilities.”

Eden Prairie set a tone on its first possession. The Eagles used 12 plays to drive into Minnetonka territory before two penalties and a sack ended the march. Eden Prairie didn’t score, but the Eagles established a physical style.

Their next drive resulted in a touchdown. A 58-yard run by Johnny Hartle set up a two-yard touchdown run by Felipe Izumi, giving the Eagles a 7-0 lead.

It was Izumi, strictly a defensive player for the first half of the season, who lugged the load for Eden Prairie. He routinely broke tackles, turning minimal gains into significant yardage.

Minnetonka cut the Eden Prairie lead to a single point in the second quarter on a 1-yard run by quarterback Aaron Syverson. The extra point was missed and Eden Prairie, which had dominated time of possession, took a 7-6 advantage into halftime.

Eden Prairie got the break that always seems to go its way on the first play from scrimmage in the second half. Syverson was sacked and fumbled, with Eden Prairie recovering the ball at the Minnetonka 35.

The Eagles turned it into a touchdown when Kramer hit Matt Sherman down the seam for a 15-yard score. A successful two-point conversion made it 15-6.

“That was just a great play call from coach [Mike] Grant,” Kramer said.

Minnetonka refused to go away. Syverson led the Skippers on a 67-yard drive, converting two fourth downs in the process, and cut the lead to 15-13 on a 10-yard run.

A chance to complete the comeback in the final minutes ended with a pass that went through a receiver’s hands and was intercepted by Will Becker with 1:30 left in the game, ending Minnetonka’s hopes.

The only person who scoffed at the idea that Eden Prairie welcomed the snowy weather was Grant.

“I don’t know,” he said. “We think with Cole we’ve got a special quarterback and we’ve got good receivers. But Izumi’s played much better. He ran hard, man. He really ran hard.”