The Royals' offense sputtered but big stops on defense and three field goals by Cade Keesling keyed a 16-14 victory. 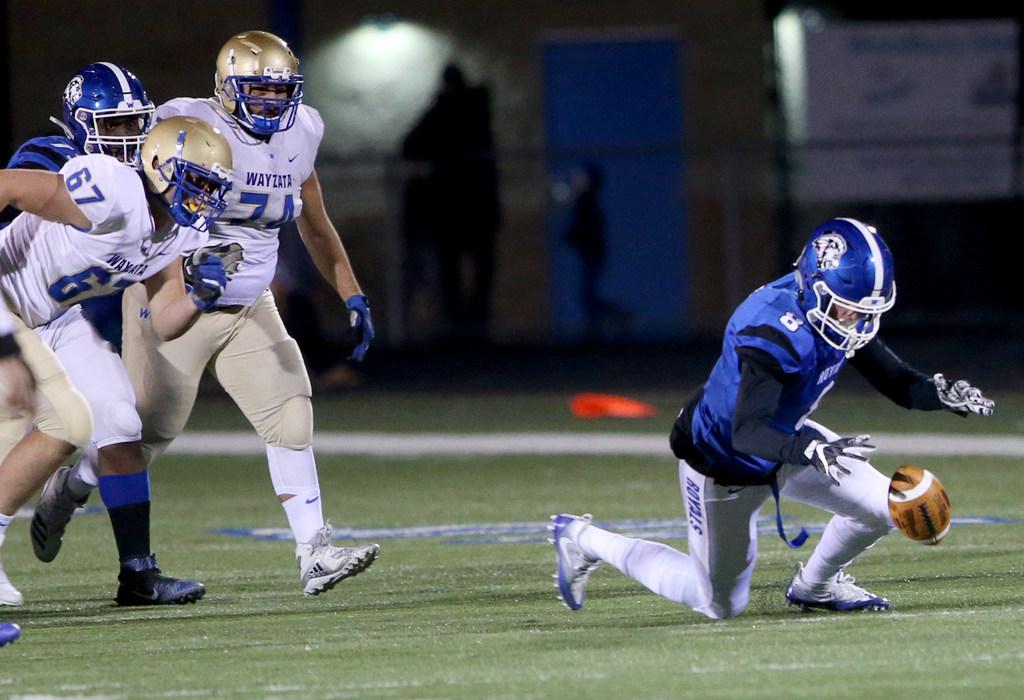 Woodbury's Drew Bramlett (8) recovers a Wayzata fumble in the first half of their Class 6A playoff game Friday in Woodbury. Photo: DAVID JOLES • david.joles@startribune.com

On the strength of a never-say-die defense and a strong-legged soccer player who finally got to focus on kicking a football, Woodbury held off Wayzata 16-14 to advance to the Class 6A quarterfinals.

When the Class 6A brackets came out a little over two weeks ago, many thought the Royals looked like the most vulnerable of the four No. 1 seeds. But defense, it’s said, wins championships, and with the exception of two long touchdowns, the Royals are playing championship-level defense.

“We go to the whistle and we don’t stop,” Woodbury linebacker Joe Rossebo said. “No let-up. That was our motto.”

Woodbury took an early 6-0 lead on field goals of 21 and 33 yards by kicker Cade Keesling.

Wayzata answered midway through the second quarter when quarterback Keaton Heide hit tight end Nick Kallerup for a 47-yard touchdown and a 7-6 lead that the Trojans would take into halftime.

Woodbury regained the lead 13-7 on its first possession of the second half. Running back Brock Rinehart broke free in the middle of the field and outraced the Wayzata defenders for a 58-yard touchdown.

Wayzata responded again, this time with a 79-yard scoring gallop by Malaki Jackson to retake the lead, 14-13.

While its offense sputtered for much of the game, Woodbury cobbled together one last drive, going 36 yards in eight plays. Keesling connected on his third field goal of the game, a 35-yarder that gave Woodbury the lead for good with 8:02 left in the game.

“Yes, it’s a luxury to have a kicker like that,” Hill said. “He’s been a soccer player until last week. This was the first week he practiced with us.”

The defense did the rest.

Wayzata had two more possessions. One ended in a punt. The other provided a large helping of late-game tension.

The Trojans took over at their own 42-yard line with 1:55 left and drove into Woodbury territory. The key play was a 19-yard completion from Heide to Kallerup on fourth-and-7.

“This is the last time I’m going to play on this field,” Orubo said. “That moment will forever be in my head.”

Wayzata frantically tried to run its field goal unit onto the field, but the clock ran out before it could get set.

“It was insane. Your heart drops with every second that it goes down,” Rossebo said. “This means so much. We’re accomplishing something as a unit and it doesn’t get better than that.”

Woodbury’s offense sputtered but its defense stood tall, lifting the Royals to a 16-14 victory over Wayzata on Friday in the Class 6A playoffs.

Cade Keesling kicked three field goals for Woodbury, including  35-yarder in the fourth quarter for the game-winning points.

Woodbury,  one of four No. 1 seeds in 6A, stopped the Trojans in the final second on the Royals’ 25-yard line.