Tartan hangs on to beat Mahtomedi in Class 5A, Section 4 championship

The Titans built a 12-0 first-half lead, then weathered the Zephyrs' second-half comeback to emerge victorious. 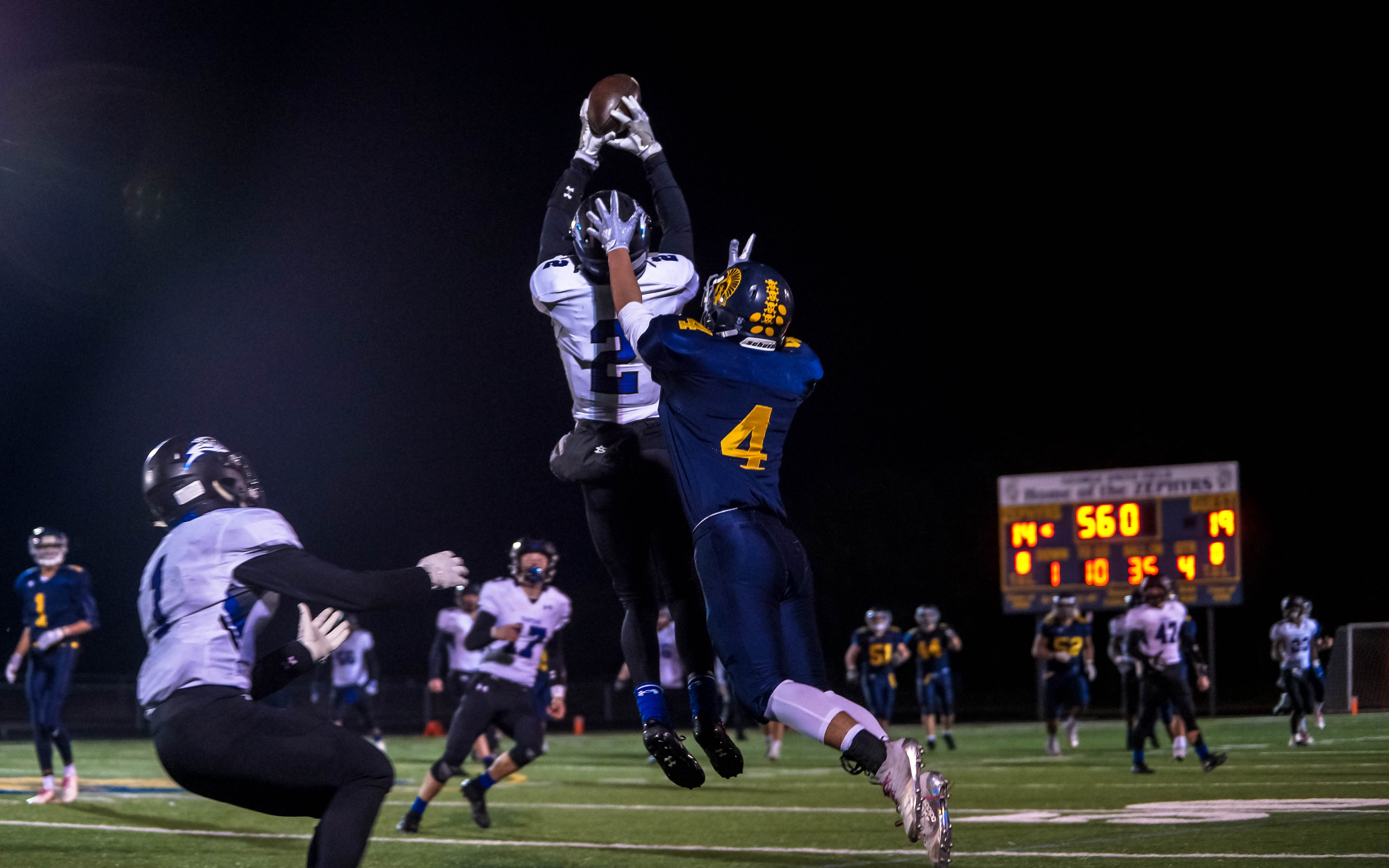 Tartan's Antwan Kimmons (2) ends Mahtomedi's final drive with an interception, securing a Titans' victory over Mahtomedi and a berth in the Class 5A state tournament. Photo by Korey McDermott, SportsEngine

After focusing on basketball throughout high school, Tartan senior Antwan Kimmons decided to play football in his final year as a Titan.

Kimmons, an Idaho State hoops commit, said motivation from his classmates and his father helped him decide to play the sport he grew up playing until high school. It's a good thing he picked up the pigskin this year.

After making the game's biggest play, what was Kimmons' main thought process? Relief.

"It's super emotional and really stressful. Not going to lie," said Kimmons, who also scored a 19-yard receiving touchdown in the first quarter. "Especially against this team."

Mahtomedi (7-3) advanced to the state tournament with a 14-0 victory in the Class 5A, Section 4 title game last fall. After that loss, Tartan coach Matt Diediker told his returning players their goal would be to come back and make another bid for the section championship.

On Friday, that goal became a reality.

"I set the goal for them at the banquet," said Diediker, who is in his second year as the team's head coach. "I knew the kids had the talent and the desire, the passion to do it. We just laid out the path for them, and they followed it.

"That's really the awesome, and completely amazing and rewarding part about this right here."

Tartan did not beat Mahtomedi just once this season, but twice. The Titans won the Oct. 12 regular season matchup 21-17.

And in the biggest game of the season so far, there was no letdown.

"It's the greatest feeling in the world," Kimmons said.

The loss on Friday ended Mahtomedi's run of two consecutive state tournament appearances. While the Zephyrs didn't make it as far as they would have liked, coach Dave Muetzel reflected positively on the team's 2018 season.

Tartan will now face St. Thomas Academy in the first round of the Class 5A tournament on Nov. 10 at Shakopee West Junior High. The Cadets, coming off a 41-6 win over Hastings in the Class 5A, Section 3 championship game, are 10-0 this season.

While Tartan has only lost two games this season, Diediker said they still might not have played their best all season. He hopes the Titans can change that at state.

"We've won a lot of games and made a lot of mistakes, so hopefully we clean that up," Diediker said. 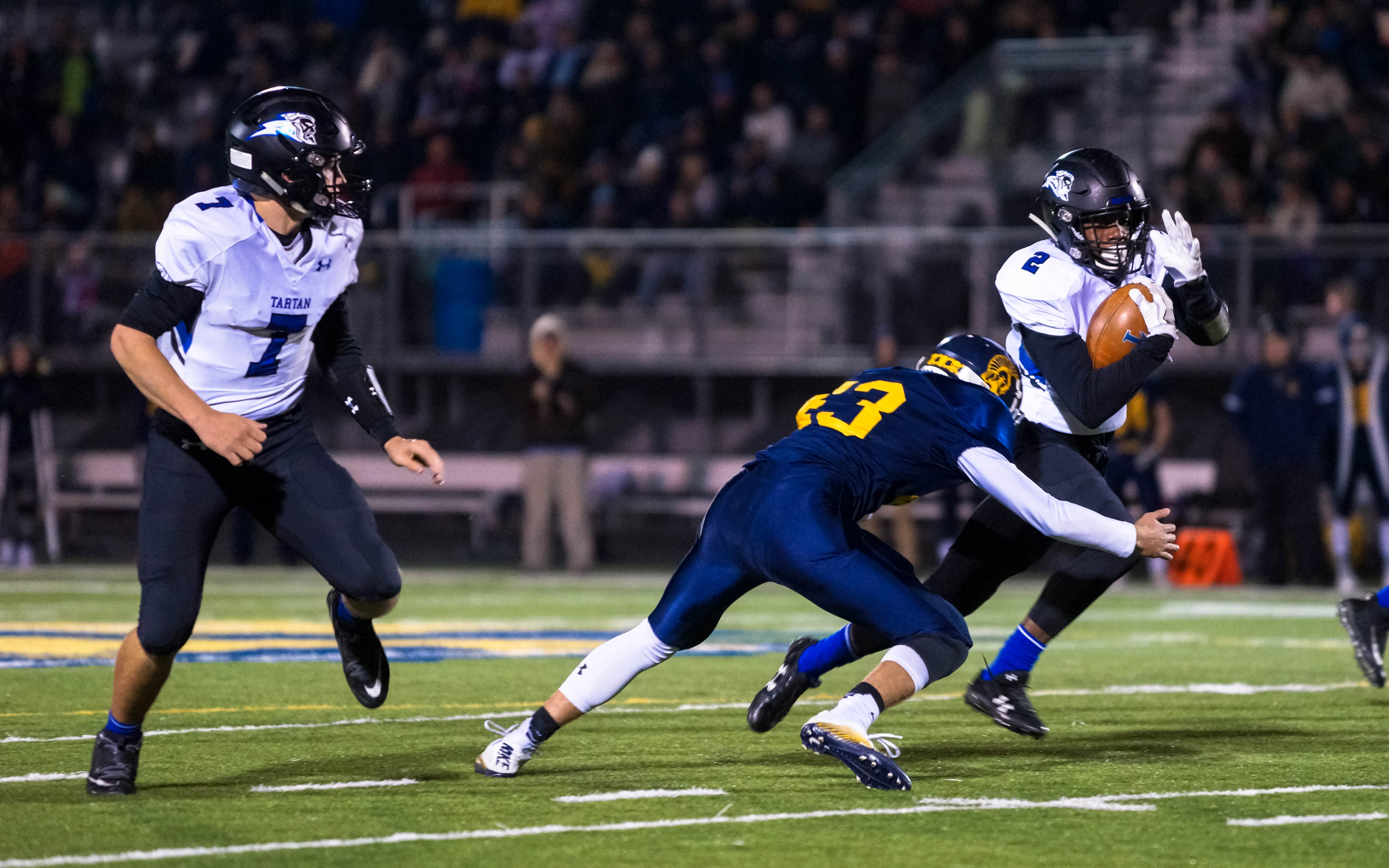 Tartan's Antwan Kimmons (2) and Solomon Whalen (7) each scored a touchdown as the Titans defeated host Matomedi on Nov 2. Photo by Korey McDermott, SportsEngine

For the first time in 47 years, the Tartan football team will play in a state tournament.

With 50 seconds remaining, Titans senior Antwan Kimmons intercepted a Mahtomedi pass and sealed the game at 19-14. The win wrapped up the Class 5A, Section 4 championship a season after Tartan lost to Mahtomedi in the title game 14-0.

Mahtomedi quarterback Jake Arlandson scored on a 1-yard rushing touchdown with three minutes left to shrink the Zephyrs' deficit to five points. Their defense got a stop, but the final drive started at Mahtomedi's own 20-yard line with just 1:14 left on the clock.

Tartan built a 12-0 halftime lead after touchdowns by Kimmons on a 19-yard reception and Tim Oeun on a 23-yard rush. Solomon Whalen added another 4-yard run

Mahtomedi scored a 2-yard rushing touchdown by Erik Bjork in the third quarter, cutting the score to 12-7. Tartan's Solomon Whalen responded with a 4-yard run — the eventual game-winner — to make it 19-7.