The Panthers recovered from an early 7-0 deficit and three turnovers to beat the Crimson. 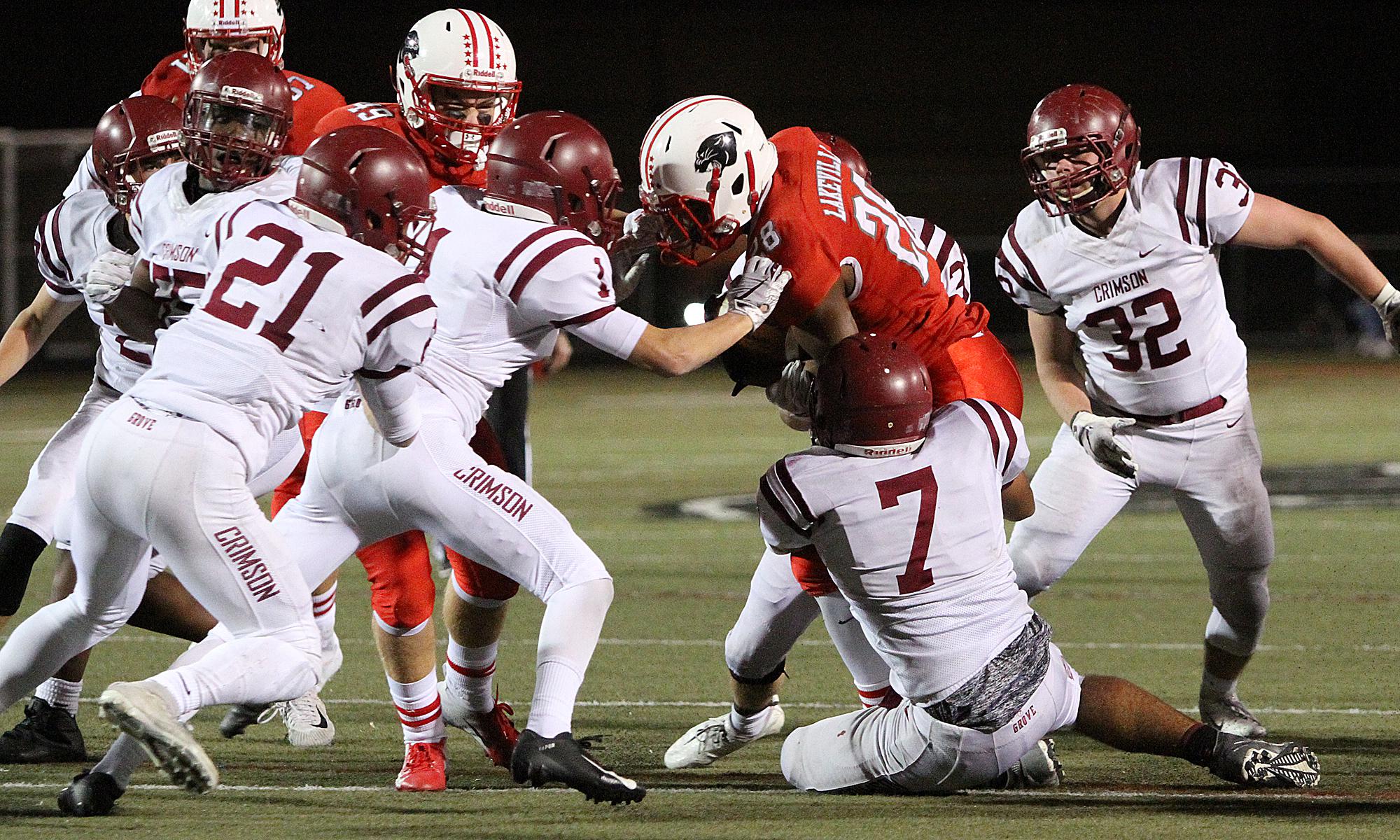 Lakeville North senior running back Brian Curtis Jr. is met at the line of scrimmage late in the first half by a group of Maple Grove defenders, including Anthony Gipson (7) and Aaron Tollefson (11). Photo by Drew Herron, SportsEngine 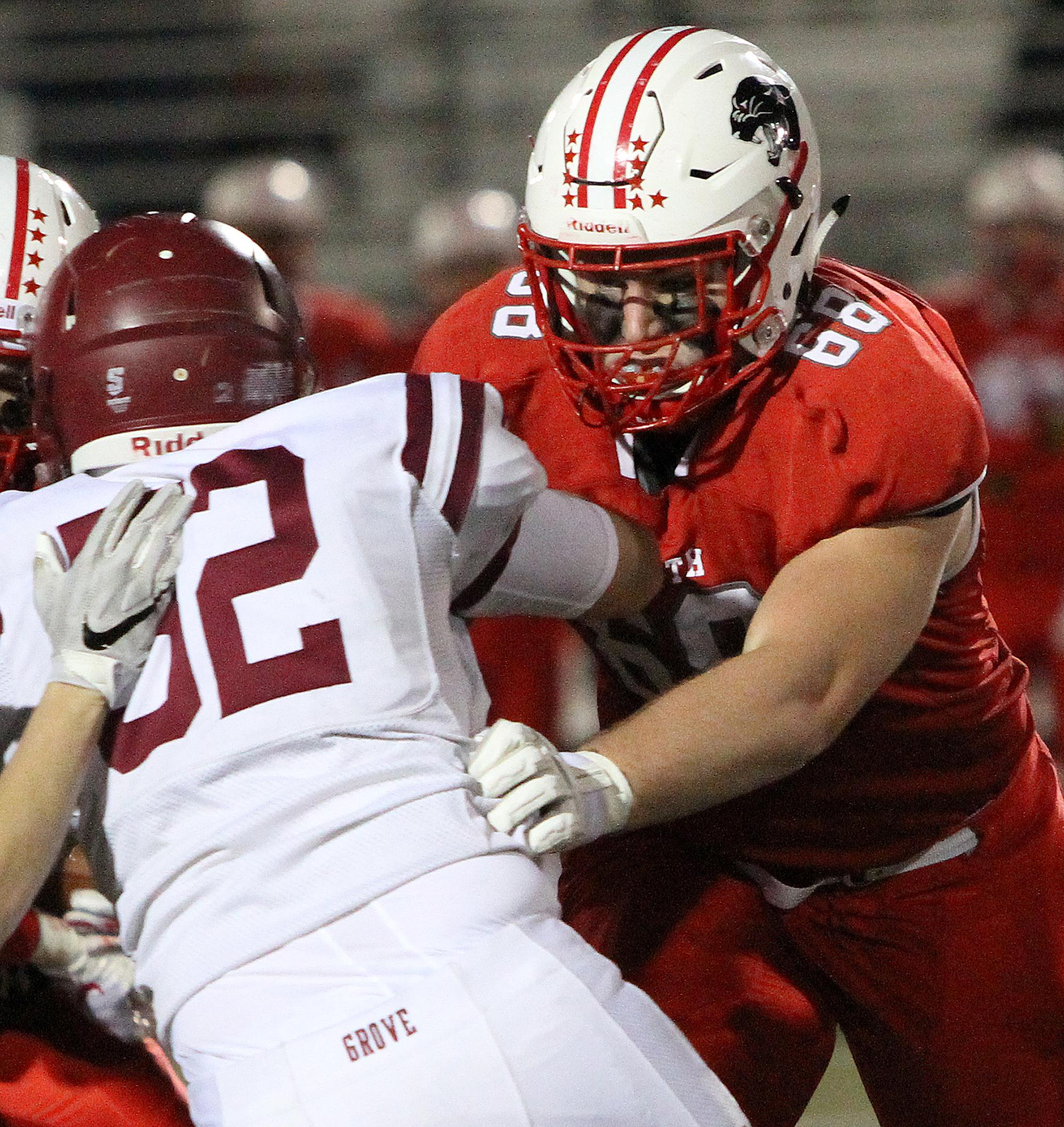 Lakeville North lineman Bryce Benhart, a 6-foot-9, 305-pound senior, is a big reason why the unbeaten Panthers are averaging nearly 300 yards per game on the ground. Photo by Drew Herron, SportsEngine

On Friday night, Lakeville North made mistakes, but kept cool behind a running game that eventually found its groove, which kept the Panthers alive in the Class 6A state tournament.

It took a couple big plays and a final defensive stand, but Lakeville North (10-0), a No. 1 seed, quelled a gritty effort from No. 4 seed Maple Grove (4-6) to win 21-13 and move to the state quarterfinals. The Panthers turned the ball over twice in the red zone and once inside their own 20 — but they also found traction in the run game in the second half after the Crimson’s game plan on defense proved effective. 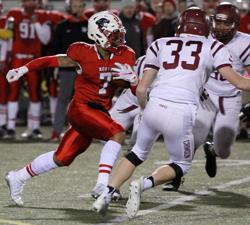 “I’m proud of my kids and coaches for staying composed, despite what was going on in the game,” Panthers coach Brian Vossen said.

Lakeville North muffed the opening kickoff, allowing Maple Grove to recover at the Panthers’ 19-yard line. Facing third and 13, a trick play resulted in a 22-yard touchdown for the Crimson and a 7-0 lead.

Lakeville North’s leading rusher, Brian Curtis Jr., entered the game with 1,667 yards and fueled the Panthers’ early drives, however, he lost a fumble at the Crimson 9-yard line to end a promising possession in the first quarter. After some early success rushing the ball, Lakeville North found it difficult against a Maple Grove defense that sold out aggressively to stop the ground game.

“We knew coming into this game it would be a battle,” Panthers senior offensive lineman Bryce Benhart said. “They made their adjustments really well. They were flying gaps, they were doing everything they could.”

Ten of Lakeville North’s 30 first-half rushes went for 1, 0 or negative yardage. RaJa Nelson injected some life into the run game in the second quarter, and had a 17-yard scoring run that tied the contest 7-7.

In the second half, just seven of the 25 rushes by Nelson and Curtis went for 1 or fewer yards, and the Panthers had three of their four longest plays from scrimmage. The backs had giant holes to run through on a go-ahead 36-yard touchdown run by Nelson in the third and a 65-yard scoring run by Curtis in the fourth that made it 21-13.

Lakeville North also missed two field goals, and Curtis lost a fumble into the end zone in the second half. A play-action pass got Maple Grove within 14-13, and a blocked extra point was all that staved off a tie game. But the Panthers forced three turnovers of their own and never panicked.

“I think more than anything, it was more of a stay the course mentality,” Vossen said. “If you look at the first half, I think that there was two opportunities to score that didn’t happen — where if they do, you feel very different at halftime.”

Curtis finished with 199 rushing yards, and Nelson added 126 for a Panther squad that’s averaged just under 300 rushing yards per game this season. And now, after being tested by a Maple Grove program that knows how to win — the Crimson reached the state semifinals last year and the quarterfinals the year before — the Panthers believe they can continue to find ways to win.

“You want to be challenged in some of those situations,” Vossen said. “You’d love to win every game by a whole bunch, but that’s just not the way it works at this stage of the season against good competition.”

Lakeville North, a No. 1 seed in the Class 6A state tournament, got all it could handle against No. 4 seed Maple Grove in a 21-13 home win Friday.

After the Panthers (10-0) took a 14-7 lead on a 36-yard run by RaJa Nelson with seven minutes to play in the third quarter, Maple Grove (4-6) responded with a 48-yard touchdown from Nate Elmes to Colby Aubut on a play-action pass with 6:50 to go in the fourth. The Panthers blocked the extra point, keeping it to a 14-13 game.

The Panthers’ first play from scrimmage on the ensuing drive was a 65-yard touchdown run by Brian Curtis Jr. Lakeville North went up 21-13 to give Lakeville North a 21-13 lead.

The Crimson struck first after a shaky Panthers start. Lakeville North fumbled the opening kickoff, giving Maple Grove the ball at the Panther 19-yard line. Quarterback Spencer Wherry connected with Tanner Skanson for a 22-yard touchdown and a 7-0 Crimson lead.

Both teams turned the ball over three times. Maple Grove’s Evan Hull had 26 carries for 83 yards. Lakeville North’s Martin had 35 carries for 199 yards, while Nelson added 20 rushes for 126 yards for two touchdowns. 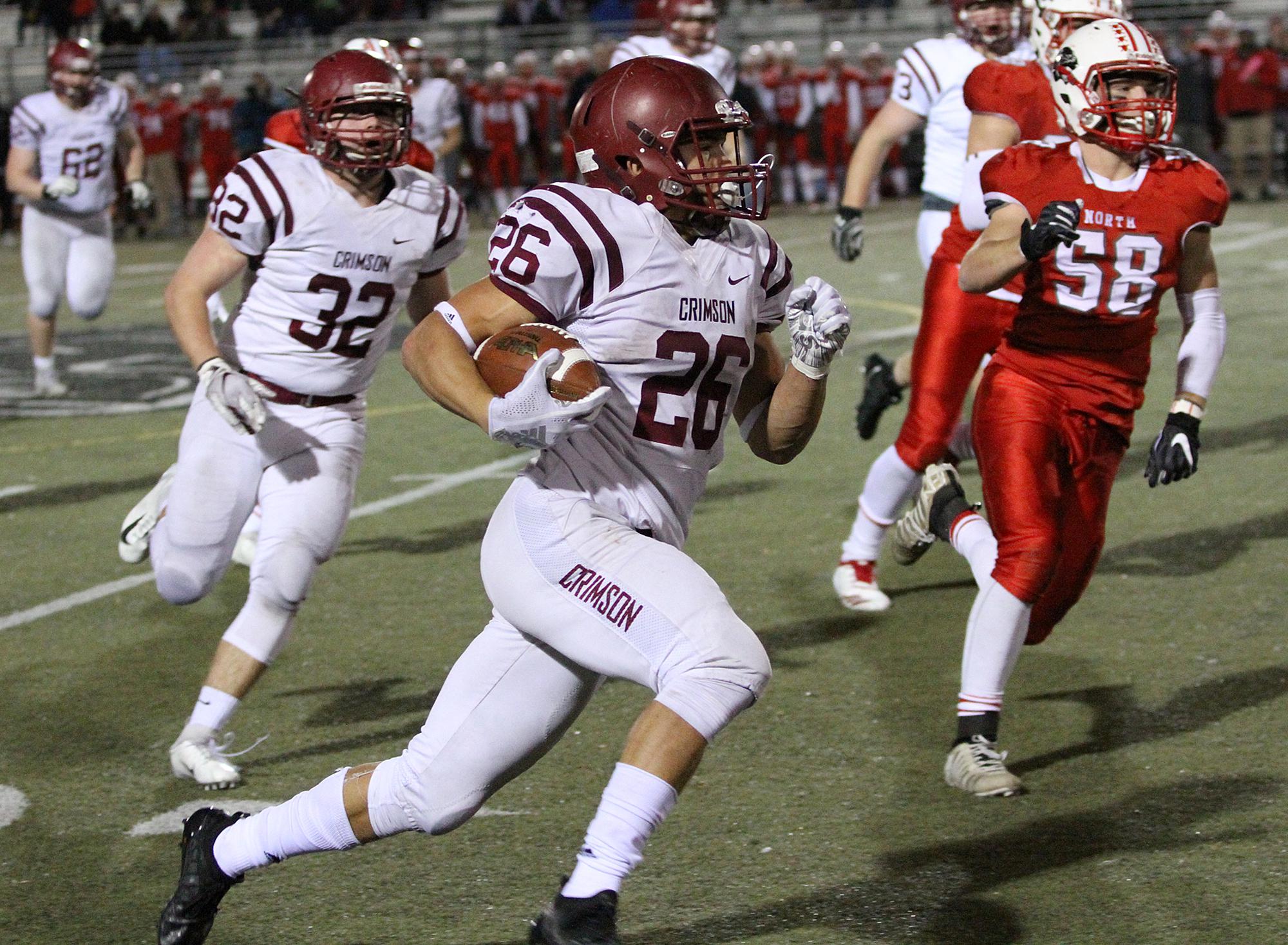