Prior Lake gets untracked, then outraces Buffalo to 52-42 victory

After a slow start, the Lakers scored on seven consecutive possessions to barely offset a 6-touchdown performance by Buffalo quarterback Aidan Bouman. 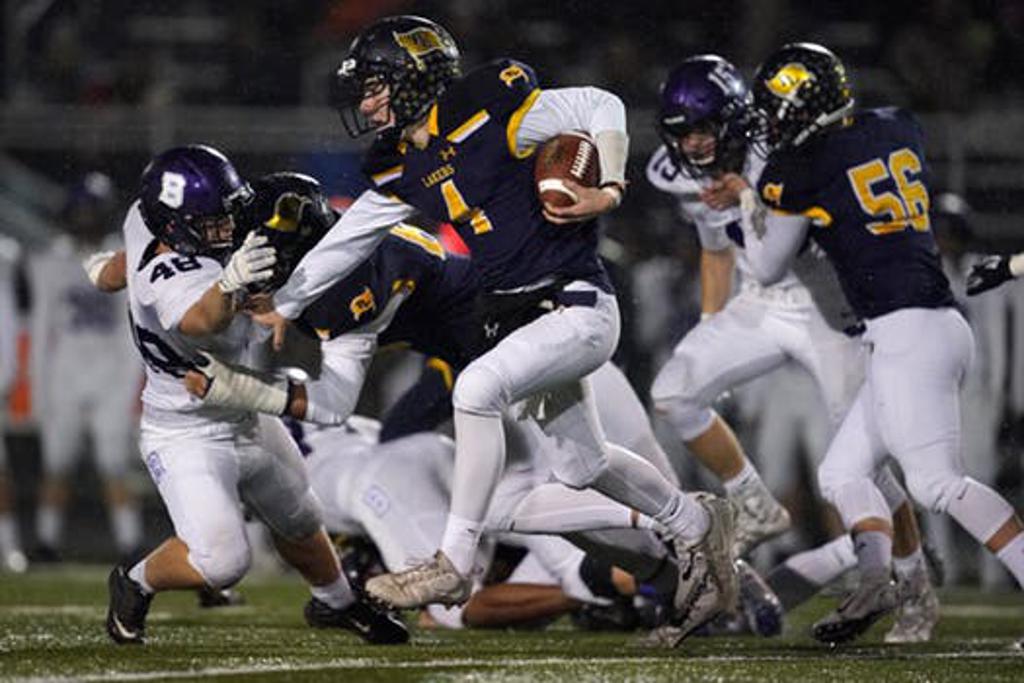 Prior Lake quarterback Colin O'Connor (4) ran with the ball as Buffalo linebacker Ty Zwack (48) reached out to try and make the tackle in the first half. Photo: Anthony Souffle, Star Tribune

After a season of hard losses and tough lumps, this is exactly what Prior Lake needed.

The Lakers (5-4) rallied from a 14-point first-half deficit with two touchdowns in the final minute before halftime. Then they kept that momentum in the second half en route to a 52-42 victory over Buffalo on Friday in the first round of the Class 6A playoffs.

“That was the funnest game I’ve ever played,” said Prior Lake quarterback Colin O’Connor, who ran for two touchdown and passed for two more.

Buffalo has made its reputation on the arm of superb junior quarterback Aidan Bouman and a cadre of quality receivers led by senior Treyton Welch.

The Bison lived up to that billing from the opening kickoff, going 95 yards in eight plays — benefiting from a key pass interference penalty on fourth-and-eight — to take a 7-0 lead on Welch’s first of three touchdown receptions.

Photo gallery: Buffalo vs. Prior Lake

Prior Lake answered on the ensuing drive, getting a 19-yard scoring pass from O’Connor to Parker Ellis. But that was all the offense the Lakes could muster until the final minutes of the first half.

With Buffalo leading 21-7, Prior Lake cut the deficit to a single touchdown on a six-yard run by Spencer Shaver with one minute left before halftime.

The Lakers forced Buffalo into a punting situation on the Bison’s next drive, but the snap went over the punter’s head. Prior Lake took over at the Buffalo 19 and tied the game one play later on another 19-yard scoring pass from O’Connor to Ellis.

The scoreboard read 21-21 at halftime, but Prior Lake taken control.

“That was the momentum we needed to set the tone for the next half,” Prior Lake coach Matt Gegenheimer said. “We felt the momentum was turning in our favor.”

Flush with confidence, Prior Lake stayed relentless in the second half, relying on an old staple — the ground game. With solid rushing contributions from O’Connor, Shaver, Ellis and a newcomer to the backfield in Sam Emmerich, every Lakers’ possession after halftime ended in points. It was enough to keep the potent Buffalo offense at bay.

“Over the last couple of weeks, we’ve learned that to continue in the playoffs, we have to run the ball more,” Gegenheimer said. “This will just make us a more balanced offense.

And finally, the Lakers were able to go out and play with confidence, which they haven experienced often this season, losing road games to Eden Prairie, Minnetonka and Lakeville North before stumbling against Eastview in the regular-season finale.

“It was really fun, going back and forth constantly,” said Ellis, who added a rushing touchdown. “Tonight’s the night we actually start our season.”