Football teams advancing in the playoffs can play as many as four games in 15 days. 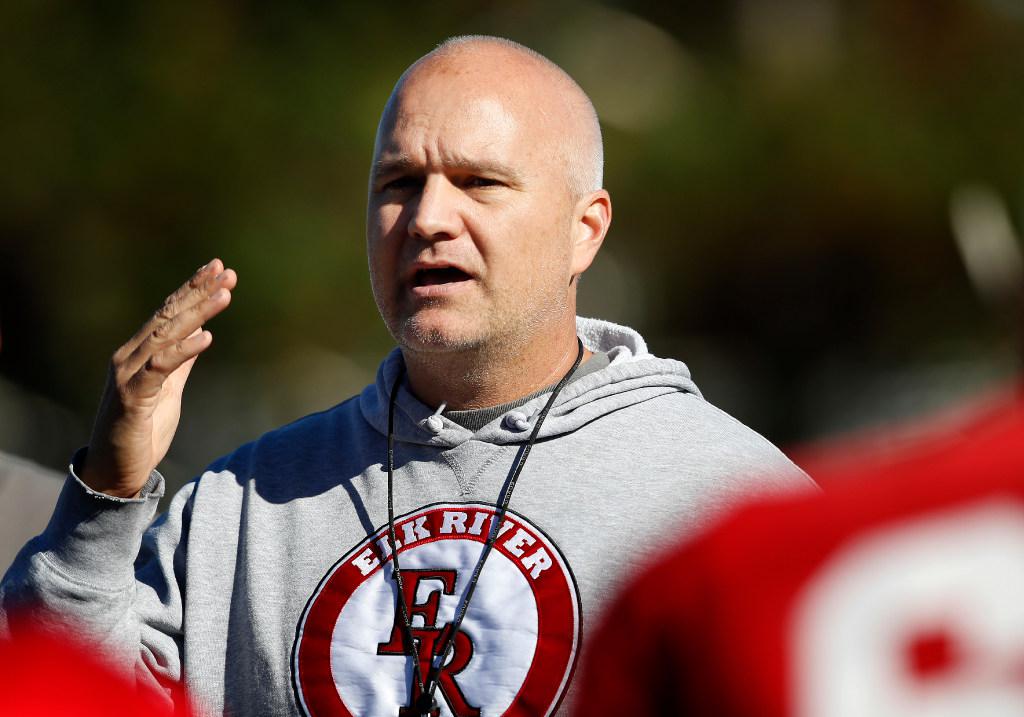 With the football postseason beginning Tuesday, a growing number of Minnesota coaches such as Elk River's Steve Hamilton are voicing concerns over the playoff format and player safety. Star Tribune file photo

With the high school football postseason beginning Tuesday, a growing number of Minnesota coaches are voicing concerns over the playoff format.

At issue is the schedule of games for all classes except Class 6A. As it is currently set up, high school teams change their end-of-the-season schedule from the traditional one-game-per-week structure to one that squeezes multiple games into a shorter time frame. For many teams in the six classes from Class 5A to Nine-Man, that can mean as many as four games in a span of 15 days.

Most typically played their final regular-season game last Wednesday before the MEA break, only five days after the previous game. The postseason begins Tuesday, followed by another round of games Saturday.

In an era of increased awareness of safety and injury prevention, changes in coaching techniques and mandated restrictions on physical contact in practices, coaches say the schedule compromises the safety of their athletes.

“Ever since I came here, it’s seemed strange to me,” said Elk River coach Steve Hamilton, who coached in Michigan and Georgia before moving to Minnesota in 2011. “As we’ve moved more and more towards player safety, it’s hard to justify. It puts kids’ safety at risk.”

Teams in Class 6A, comprised of the 31 largest schools in the state, have eight days off between the end of the regular season and the start of the postseason.

Hamilton is not the only coach making his concerns known. Jeff Williams of defending Class 5A champion Owatonna proposed a change a few years ago, but it largely fell on deaf ears.

“I was on the Minnesota Football Coaches Association advisory committee, and I proposed we consider a model where only half the teams make the playoffs. But most members of the committee felt pretty strongly that every team should qualify,” Williams said. “But playing on Friday-Wednesday-Tuesday-Saturday is an awful lot to ask of kids when we’re as concerned as we are with safety.”

Mora finished this season 8-0, yet due to the section seeding process, the Mustangs didn’t get a bye and will play a first-round game in Class 3A, Section 5 against No. 7 seed Minneapolis Henry. Coach Troy Erickson chafes at the idea.

“With everything we’ve talked about player safety and have done to preserves the game, it makes us look like hypocrites,” Erickson said. “We’ve had the same system for 34 years. It’s time to change now before something terrible happens.”

The current system is the brainchild of Brainerd’s Ron Stolski, in his 57th season as a head coach. Stolski, the coaches association executive director, said he hasn’t heard of an effort to get the current format changed.

“It’s really the first I’ve heard about it,” he said. “We’ve done it this way for as long as I can remember.”

Stolski, a leading voice for changing how high school football is coached and taught, said the game is much safer than before.

“We’re doing things differently than we did even three years ago,” he said. “Practices are pretty much noncontact. I think you’re allowed an hour of contact a week. There’s no such thing as a full scrimmage anymore. Schools are practicing using our new techniques. I think it’s safer than it’s even been.”

Bob Madison, who oversees football as associate director of the Minnesota State High School League, said coaches’ concerns “are valid. That turnaround from Wednesday to Tuesday to Saturday can be difficult. I haven’t seen any data on injuries it’s caused, but my advisory committee has had some great conversations about safety.”

Both Madison and Stolski emphasized that each section has the right to alter its playoff format if it wishes.

“The sections have the right to change things,” Madison said. “For example, they could decide to have a first-round bye for seeds one through six and have a play-in game if they choose to.”

Said Stolski: “My recollection is that the MSHSL simply states that you just have to determine a section champion by a certain date. Early on, sections had a choice to seed as few as four teams or as many as eight.”

That is where Hamilton, Williams, Erickson and others are focusing their energies. Hamilton said in Georgia only the top four teams in each section make the state tournament. The rest of the teams play one final game against a corresponding team in a different section.

Erickson likes that idea. “The way football is set up now, only [seven] teams end the season with a victory,” he said. “But if you’re 2-6 and you have a final game against another team that’s 2-6, you have a chance to walk away from the season with a good feeling. And that builds programs.”

If any change happens, it will depend on an organized effort by the coaches association to bring it about. Hamilton acknowledges that there is not yet an official committee formed to study the issue, but he says he’s gotten a lot of support from coaches in informal discussions.

“The bottom line is it’s about safety for the kids,” he said. “If we want to keep the game growing, we have to show people that we can do better.”