Staff picks: One more prep football night before it's win-or-go-home 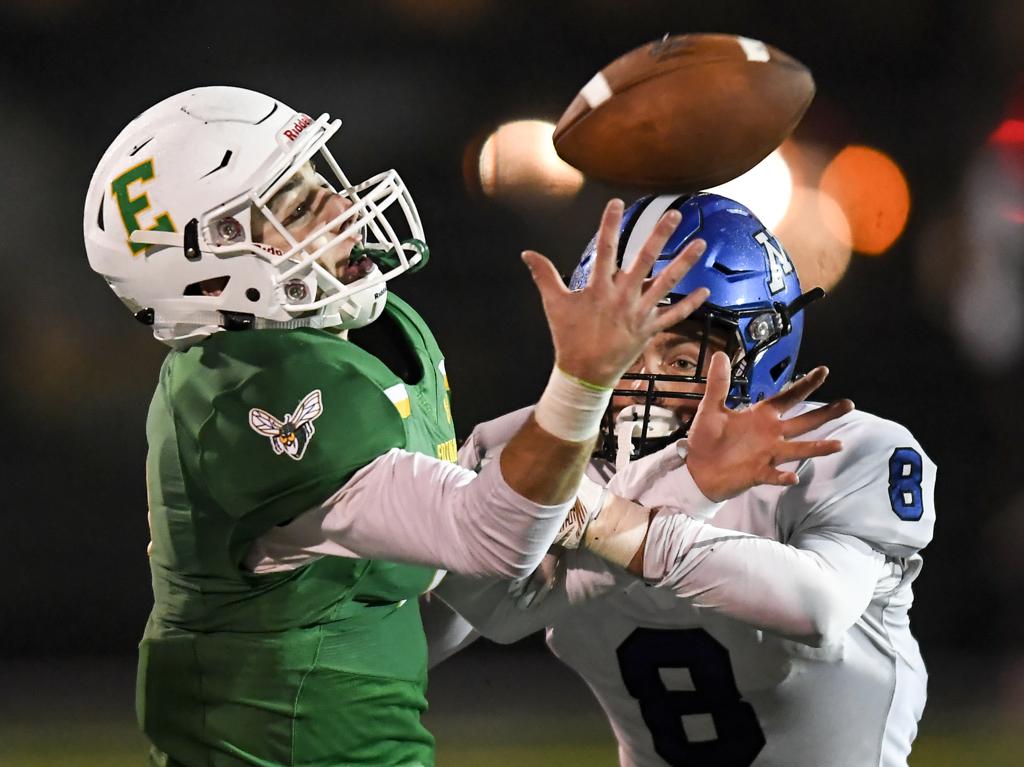 Jim says: People have been taking shots at Eden Prairie all season, waiting for the Eagles to slip up. Granted (pun intended), this is not the best team Eden Prairie has put on the field, but that bar is ridiculously high. A team with a Division I recruit at QB (Cole Kramer) is dangerous. Edina added a dimension in WR Jake Boltmann, but that won’t stop Eden Prairie from winning the Metro West subdistrict title. Eden Prairie 30, Edina 16.

David says: There are 17 teams in Class 6A with winning records, and Edina averages the fewest points per game (14.6) of them all. Which means no one is doing more with less when it comes to scoring. To defeat Eden Prairie, the Hornets must spring running back Matt Cavanagh, limit penalties and be poised on defense — especially on fourth down. Edina 20, Eden Prairie 14

Jim says: Irondale ripped off five consecutive victories before falling in OT at St. Louis Park on Friday, but the combined record of the teams the Knights defeated is 7-28. Can they stay with a Cooper team that leads Class 5A in points scored (47.1 per game)? Irondale will score, just not enough. Cooper 38, Irondale 28

David says: How explosive is Cooper? Running back Nascier Borden averages 9.4 yards per carry and leads the team with 975 rushing yards and 15 touchdowns. A trio of receivers averages 20 yards per catch or better. That’s why the Hawks win their 16th consecutive regular-season game and the Suburban Gold title. Cooper 42, Irondale 21

Jim says: Either Waconia regroups from its crushing last-minute 7-6 loss to Holy Angels and comes out loaded for bear, or the Wildcats’ defensive spell has been broken for ground-greedy Chanhassen, which averages nearly 260 rushing yards per game. Playing on a short week, I think Waconia’s hangover lingers. Chanhassen 20, Waconia 14

Jim says: Fridley will be Providence’s toughest test of the season. The Tigers’ athleticism on offense, particularly QB Kaleb Blaha and RB Michael Ude, will find cracks in the Lions’ defense. And they’re opportunistic, looking to score on offense or defense. Playing at home should help Fridley adjust better to the abbreviated prep time. Fridley 24, Providence Academy 22.

David says: Providence has blanked six of seven foes this season and has outscored opponents 259-6. A large part of the Lions’ success has been their ability to create turnovers, having forced 20 of them. Senior linebacker Jaden Morton, who leads the defense with 51 tackles, and the Lions finish the regular season unblemished. Providence 30, Fridley 14

Jim says: This was once among the metro’s most heated rivalries. After starting 4-1, White Bear Lake has dropped its past two games, jeopardizing its first regular season above .500 since 2012. Mounds View’s season has been uneven, with a sound defense and an offense relying on QB Cole Stenstrom’s arm. White Bear Lake 26, Mounds View 23

David says: These teams embody the Metro East subdistrict this fall, often a few steps forward and then one step back. At their best, they have defeated top-10-caliber teams. Mounds View upset East Ridge two weeks ago and will show the best in a battle of two teams that could be scary in the playoffs. Mounds View 20, White Bear Lake 14