Metro football top 10: The picture gets a little clearer

Four teams — Lakeville North, Blaine, Eden Prairie and Edina — have separated themselves from the rest of Class 6A. 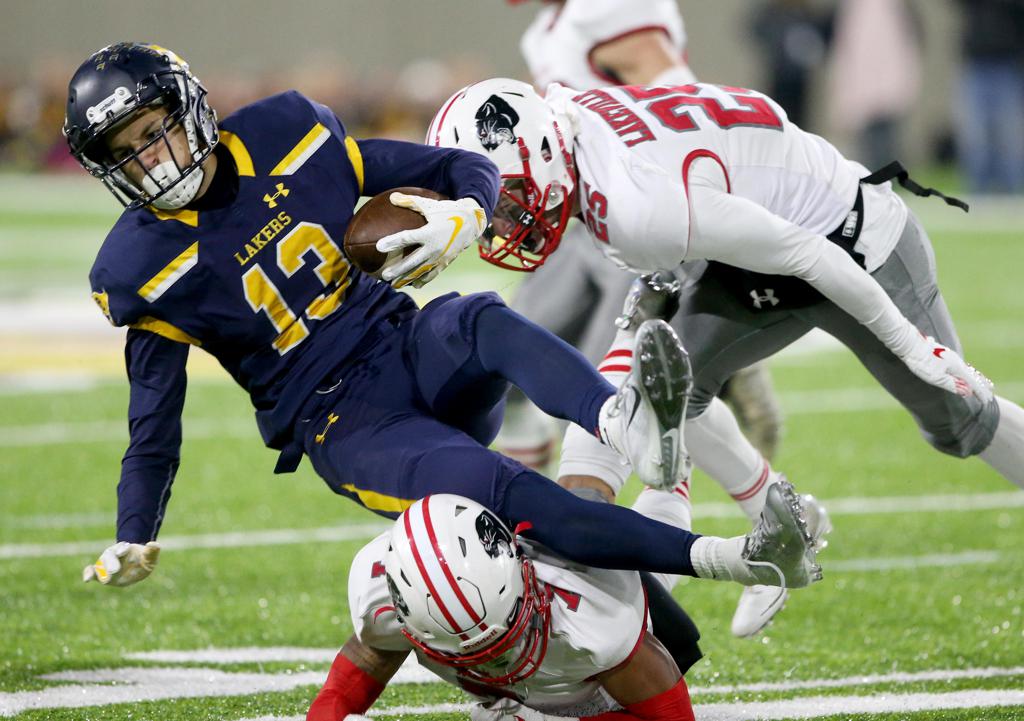 Prior Lake receiver Spencer Marlier was upended by Lakeville North defensive back RaJa Nelson after catching a pass during the first half Friday at TCO Stadium in Eagan. Photo: David Joles * david.joles@startribune.com

Friday night’s results clarified things in Class 6A with one night of regular-season football left to play.

You can make a case to add 6-1 Woodbury to that mix, based on the fact that the Royals secured the No. 1 seed in Section 5 with a victory over rival East Ridge, but the condition of injured starting quarterback Jake Wenzel is a concern.

The rest of 6A got a lot more messy, with an entanglement of slightly-better-than-average teams that seemed to trip over prosperity. St. Michael-Albertville looked to have righted its ship until getting blanked by Stillwater 7-0. Same thing for Mounds View, which lost to Roseville, and Rosemount, which needed a third-quarter rally from a 12-point deficit at home to slip past Burnsville. Minnetonka, one of the metro’s most talented teams, continues to beat itself with mental mistakes and has lost two in a row.

Meanwhile, the best of Class 5A continues to take advantage of 6A slip-ups to creep into the top 10. St. Thomas Academy, a fixture in the metro rankings for much of the season, is joined this week by two fellow 5A powers with fearsome offenses, Elk River and Cooper.

1. Lakeville North (7-0): The Panthers beat Prior Lake for the first time in the regular season since 2011, a string of four straight losses.

3. Eden Prairie (6-1): With two touchdowns on fourth-down plays, the Eagles showed they’re the best at making plays in do-or-die situations.

5. St. Thomas Academy (5A, 7-0): The Cadets allowed double-digit points in consecutive weeks but won both by more than 30 points.

6. Woodbury (6-1): With a late defensive stand to hold off East Ridge, the Royals showed the grit that coach Andy Hill has longed to see.

8. Rosemount (5-2): An 85-yard kickoff return for a touchdown by Evan Geiwitz sparked an Irish rally against Burnsville for a fifth straight victory.