Despite giving up two fourth-quarter touchdowns, the Elks defense held the Huskies on the final drive. 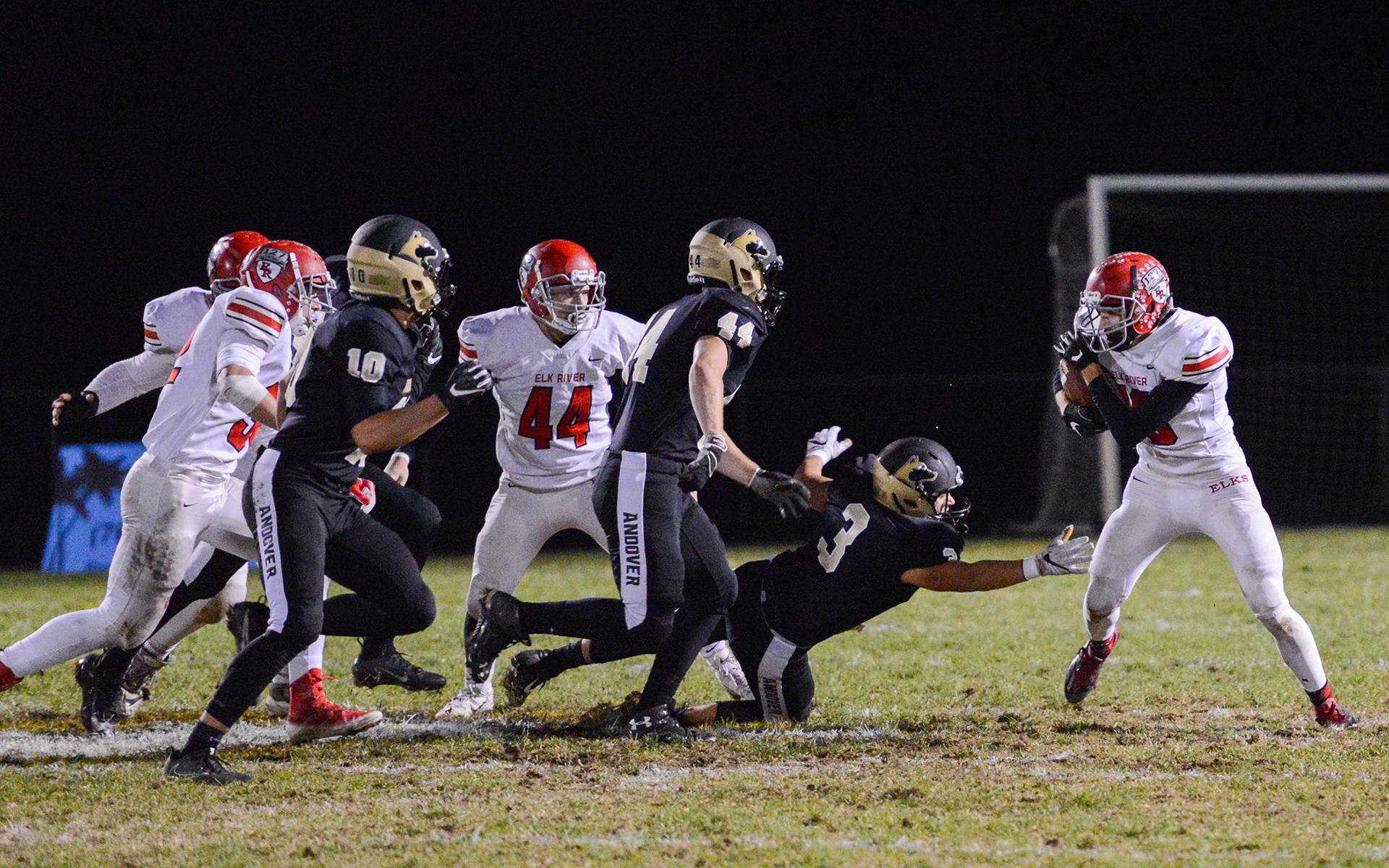 In their 28-26 road win against Andover, the Elks won a different way. They did it with defense and passing.

In the second half against the Huskies, Elk River, ranked No. 2 in the Class 5A Associated Press poll, struck for two passing touchdowns, both connections from Tyler Leshovsky to Logan Enkhaus. Leshovsky completed two of the four passes he threw, and the completions went for 41 and 33-yard TDs. 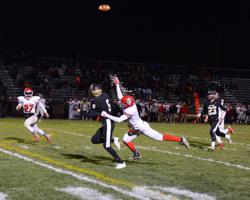 Enkhaus said his role on each play was to read the outside linebacker and the safety on his side of the field. On both plays, the linebacker played the run, and he was able to make a move on the safety, who was caught in no man’s land.

“(When) the safety crashes down, and he was on me pretty quick, I just hooked it outside, switched up my route and I got the ball,” he said. “I got open, and my quarterback made great passes.”

While the two big scoring plays came on passes, they were both set up by play-action. The Elks ran for 217 yards in the game, and the Huskies (3-4, 2-4) were piling defenders into the box to try and stop it.

“They were selling out everybody for the run, so at some point we have to make them pay for that,” Elk River coach Steve Hamilton said.

As for the defense, the Elks made two big stops to preserve the win. The Huskies scored a touchdown with 3:51 left in the game, making it 28-26, but on the following two-point conversion attempt, the Elks came up with a stop by swatting down a pass in the end zone.

“We were trying to run a little mesh route, and their linebacker came up and jammed our mesher and we couldn’t get the throw (completed),” Andover coach Rich Wilkie said about the two-point play call. “They executed better than us.”

The Huskies had one more chance to get a game-winning score, as they had to drive 70 yards in 52 seconds. The Elks let them get yards, but they made a stop at their 20-yard line with the clock expiring to seal the game.

Wilkie told his team that he was disappointed with the game’s outcome but that he was proud of their overall effort. He added that he was pleased with his team’s defense, which was able to get consistent stops.

“That might have been the most times they’ve had to punt in two seasons in a game,” he said.

This was the closest game the Elks played this season, and they continue to get every team’s best efforts as their undefeated season continues. With little time to make adjustments for their next game, which will be next Wednesday against Cambridge-Isanti, Hamilton voiced his frustration with the scheduling.

“I have an issue, this is just personal, that we talk about safety. Here we are in a state that preaches safety, but then we have to turn around and play Wednesday. And if you’re a team that doesn’t get the bye, and you win Tuesday and you win Saturday, you’re playing three games in 10 days. You just can’t tell me how that’s safe for the kids,” he said.

While Hamilton is concerned with the short week, it’s something at least one of his players embraces.

“I’m excited, I wish we had two games a week baby,” Enkhaus said. 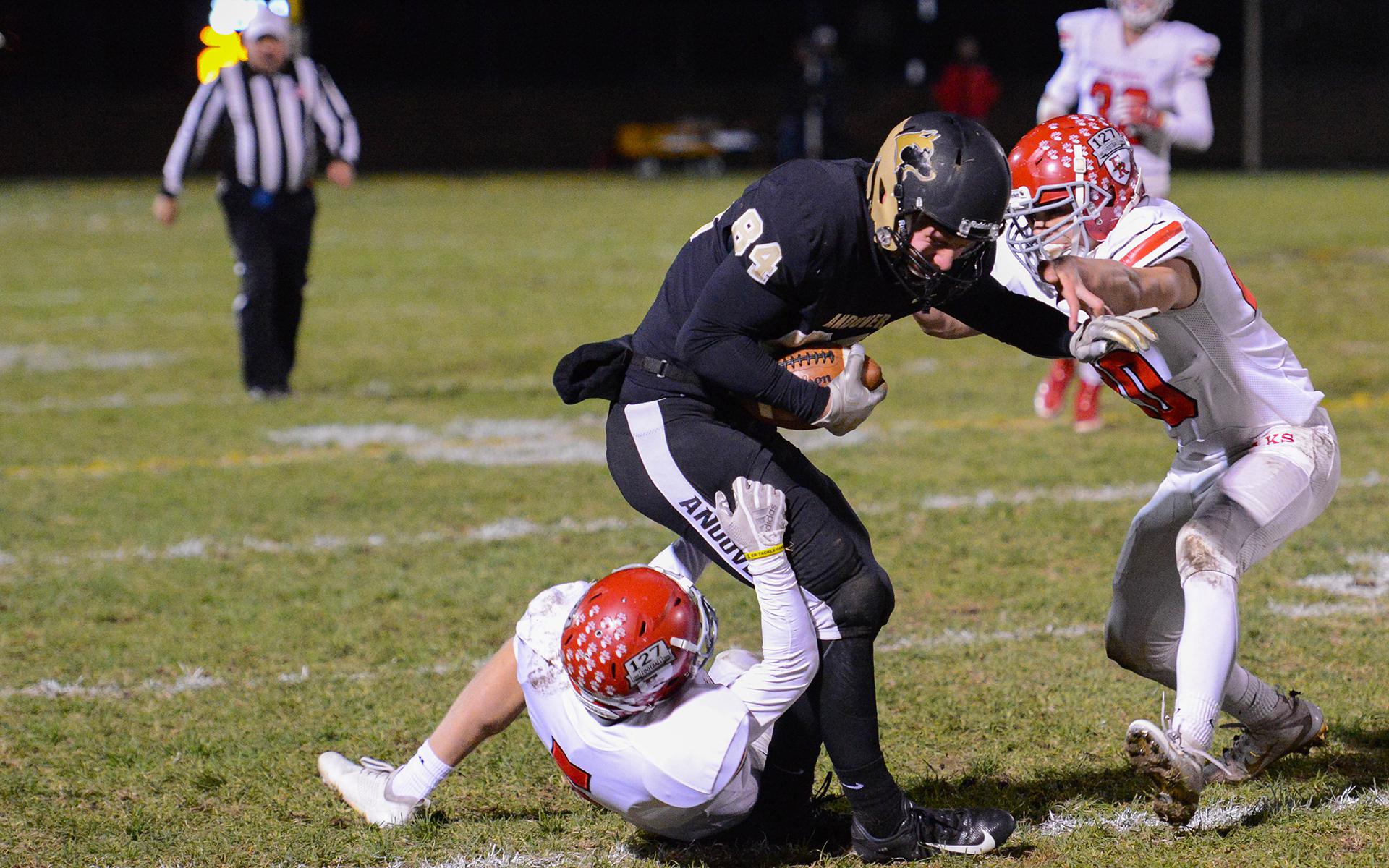 Elk River running back Logan Enkhaus caught two touchdowns on two consecutive drives — one for 41 yards and one for 33 — to put the Elks up 28-12 with just over eight minutes left in the game. It was the only two completed passes for the Elks.

Elk River running backs Carter Otto and Kevin Egbujor each scored a touchdown in the first quarter, Otto from 30 yards out and Egbujor from the 2-yard-line. The Elks led 16-12 at half.

The Andover defense came through again, as Holden Dunleavy came up with a fourth-down sack to give the Huskies the ball with under a minute to play. The Huskies couldn’t find the end zone, and time ran out. 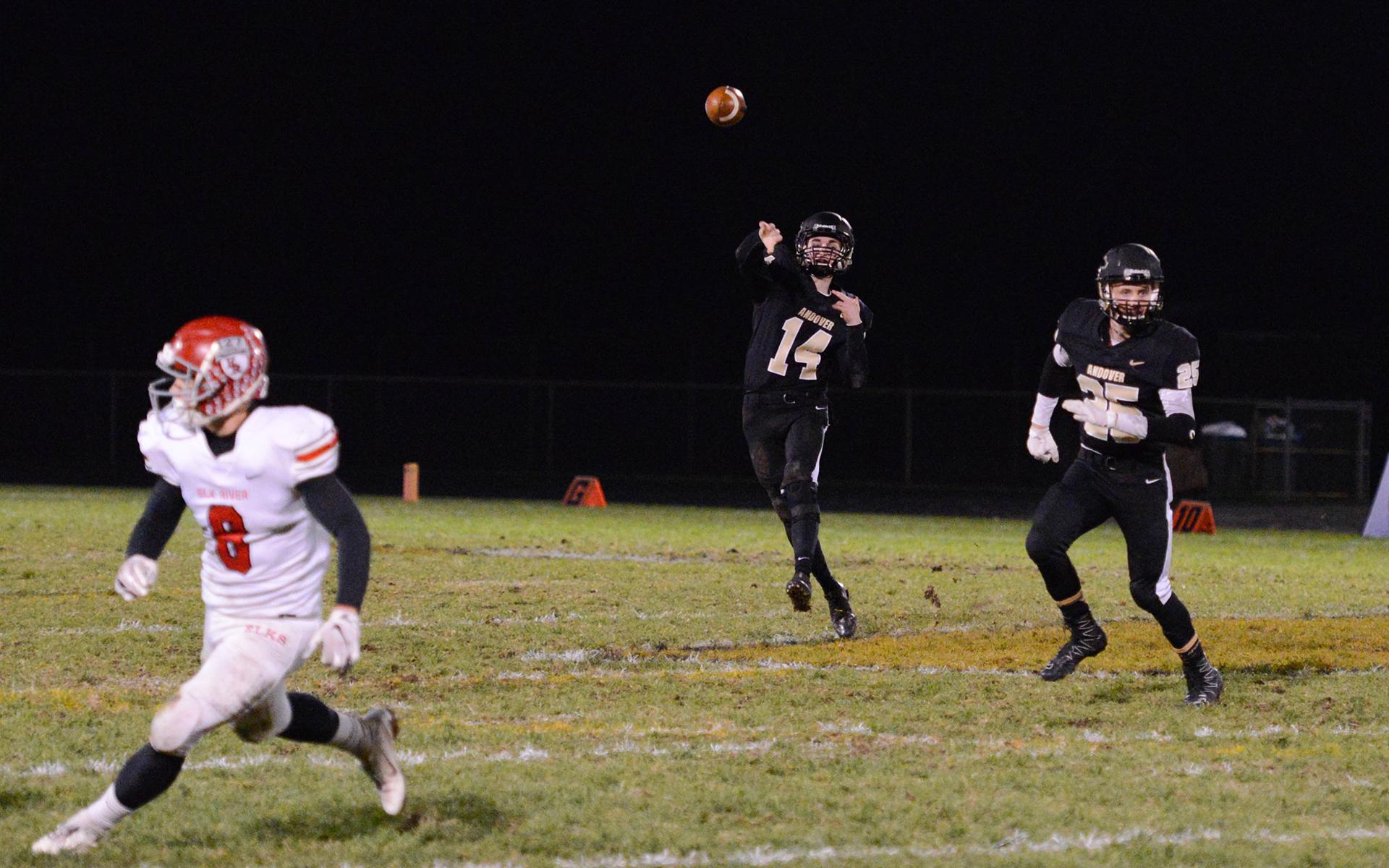