During halftime, Drew Pearson fired up his Royals teammates, who went on to beat the Raptors for their fifth-straight win. 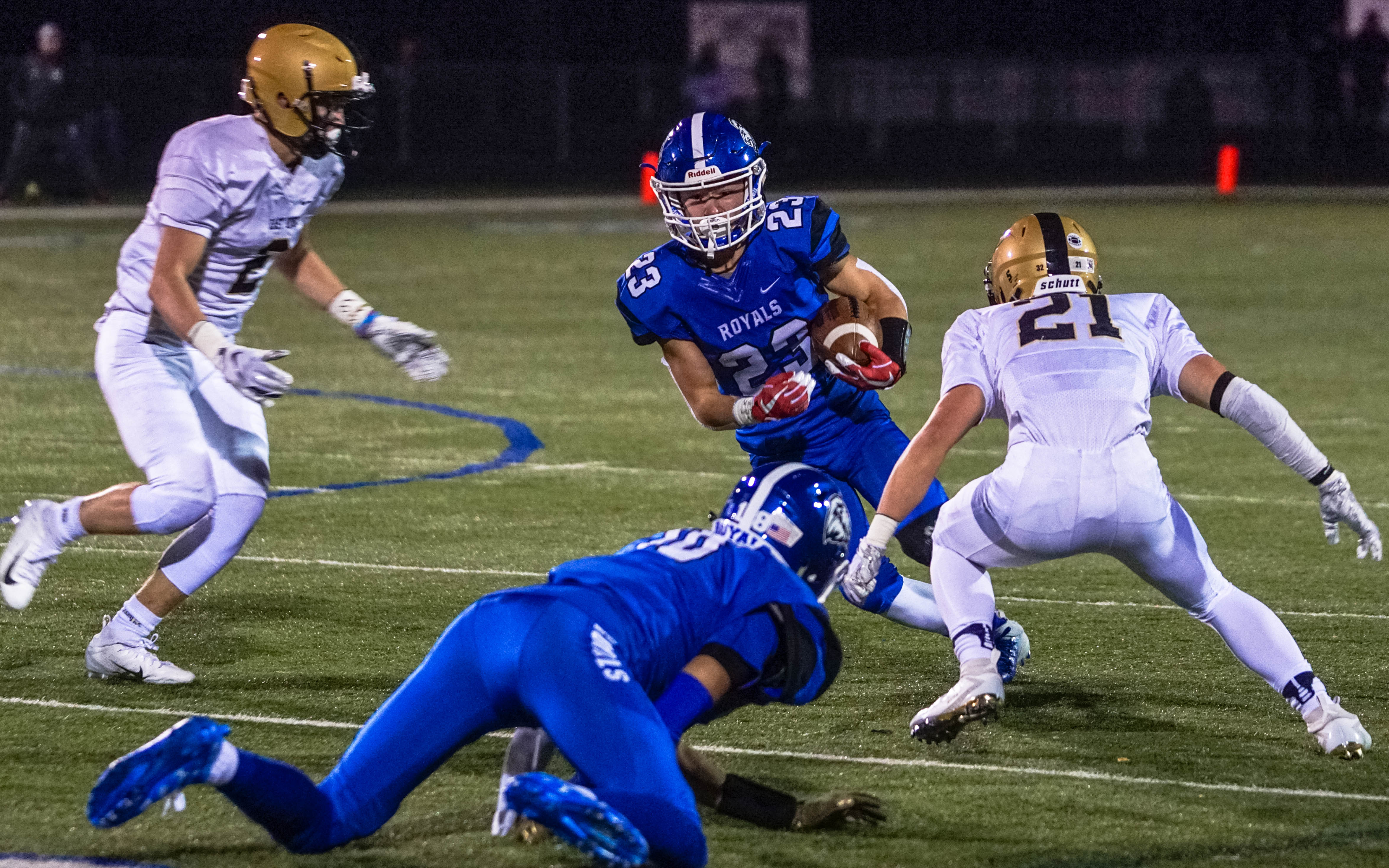 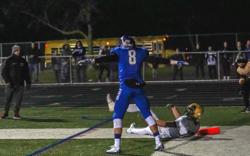 It turns out he didn’t have to.

“Drew Pearson gave an impassioned speech, and after that I didn’t need to say anything,” Hill said. “We felt we were stopping ourselves on offense, but we were playing well on defense. …

“Drew’s a quiet kid, but he told us we had worked all year for this — now let’s go get this thing done.”

Pearson, a senior wide receiver and defensive back, said his halftime speech came from the heart.

It appears Knute Rockne could have learned a thing or two about halftime speeches from Pearson as the Royals responded with an amazing fourth-quarter comeback that included a goal-line stand, a length-of-the-field drive, and a field goal on the final play of regulation.

Then Cade Keesling connected on a 27-yard field goal in overtime to give Woodbury, ranked No. 5 in the Class 6A Associated Press poll, a 20-17 victory and sole possession of first place in the Metro East district.

Keesling forced the overtime with a 25-yard field goal on the last play of regulation, capping a drive that saw the Royals (6-1, 4-1) start on their own 3 after East Ridge had failed to score despite reaching the Woodbury 2.

The No. 10-6A Raptors led for most of the contest thanks in large part to quarterback Zach Zebrowski, who completed 16 of 18 passes for 190 yards and a touchdown in regulation. He helped direct East Ridge, leading 17-14 entering the fourth quarter, on a potential game-clinching drive to the shadow of the Woodbury goal.

But Pearson said he was not worried.

“Our defense is our heartbeat,” he said.

And the heartbeat held, forcing the Royals to turn the ball over on downs on the Woodbury 3.

“Once the other team gets the ball inside the 2, you don’t worry about snap count — you just go,” Hill said. “They can’t advance us much closer to the goal if there’s a penalty, anyhow.

“Defense at that point is about being tough. We made some plays, and I was proud of our kids for doing it.”

East Ridge coach Dan Fritze saw his team gain nothing on back-to-back running attempts before a bad snap on third down led to an errant pass by Zebrowski on fourth down.

“They have a great defense, and we struggled to run the ball,” Fritze said. “When you’re inside the 5 and don’t have a run game, yards get tough down there.”

With 7:55 on the clock, Woodbury drove all the way to the Raptors' 7 before a bad snap on a third-down play with the clock winding down forced Hill called timeout with exactly 2 seconds left. Keesling connected on a 25-yard field goal as time expired to force overtime.

East Ridge got the ball first in the extra session and got to the 2 before an incomplete fourth-down pass from Zebrowski to Dan Larson.

“We were playing for the win,” Fritze said of the decision to go for it on fourth down. “If we had scored a touchdown, they would have tried to score a touchdown then go for two and the win.

“With one play — and with our quarterback and our big receiver — we would call the same play again. We liked the match-up.”

Woodbury was burned by a celebration penalty after the big stop and started its overtime drive on the 25 instead of the 10. Two rushing plays set up Keesling for the game-winning 27-yard kick.

“When they didn’t send out their field-goal team, I told Cade he would kick it as soon as we got the ball,” Hill said. “But the penalty put us on the edge of his range.

“But we got a good read from Charlie [Wilson] for an 8-yard gain, and we got 5 or 6 more yards to make it basically a long field goal.” 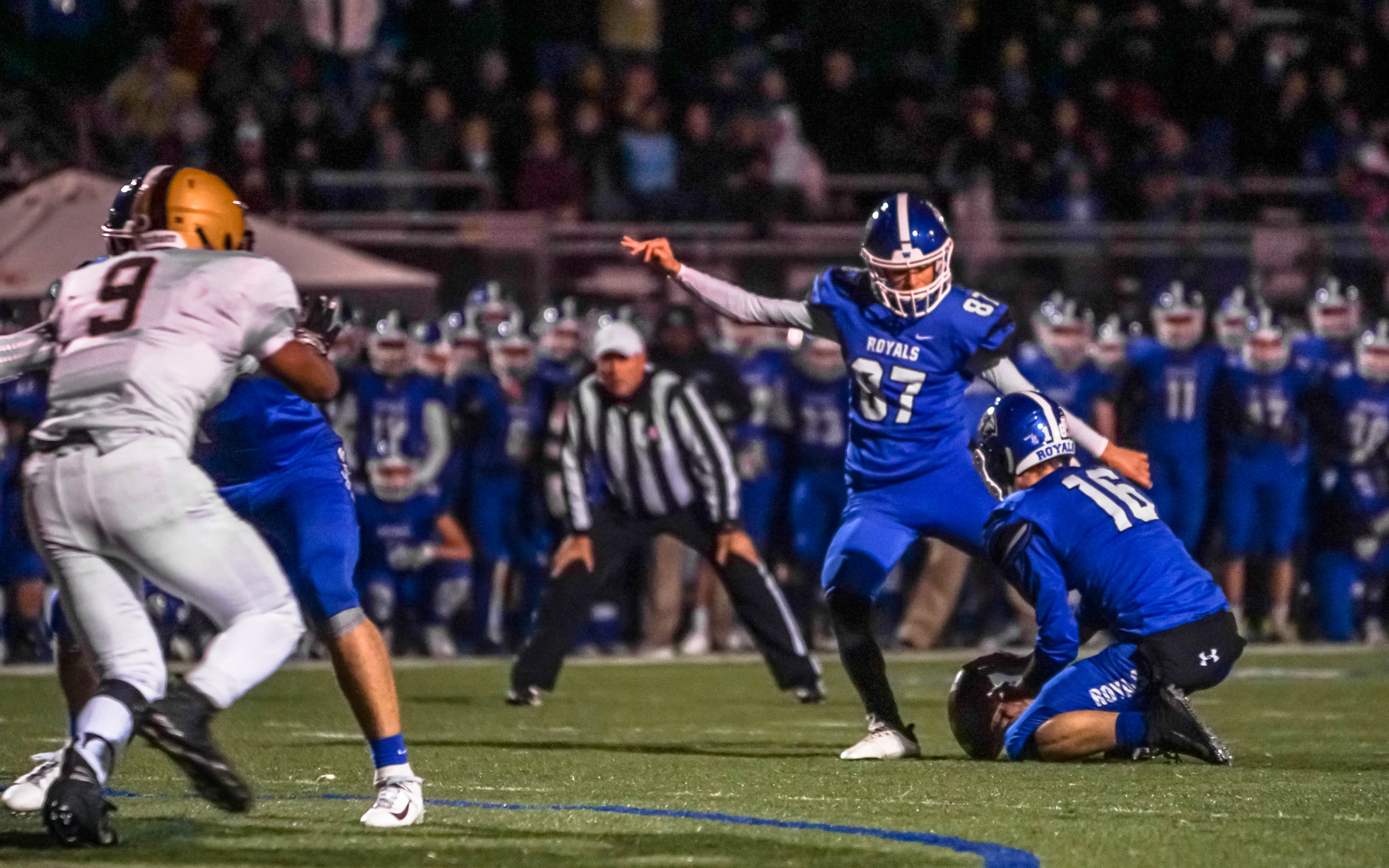 With the umpire and his teammates looking on, Woodbury kicker Cade Keesling steps into the game-winning kick to beat East Ridge in overtime 20-17. Photo by Korey McDermott, SportsEngine

Keesling forced the overtime with a 25-yard field goal on the last play of regulation, ending a drive that saw the shorthanded Royals (6-1, 4-1) start on their own 3-yard line.

Charlie Wilson scored a rushing touchdown as he filled in as part of a quarterback-by-committee effort for the Royals, who are ranked No. 5 in the Class 6A Associated Press poll, to replace injured starter Jake Wenzel. Zach Ames contributed with Woodbury’s other touchdown, rushing from 6 yards out.