After a quiet first half, Chanhassen outduels Hopkins to claim road win

The Storm surged to a 21-0 lead in the third quarter before fighting off a furious comeback attempt from the Royals. 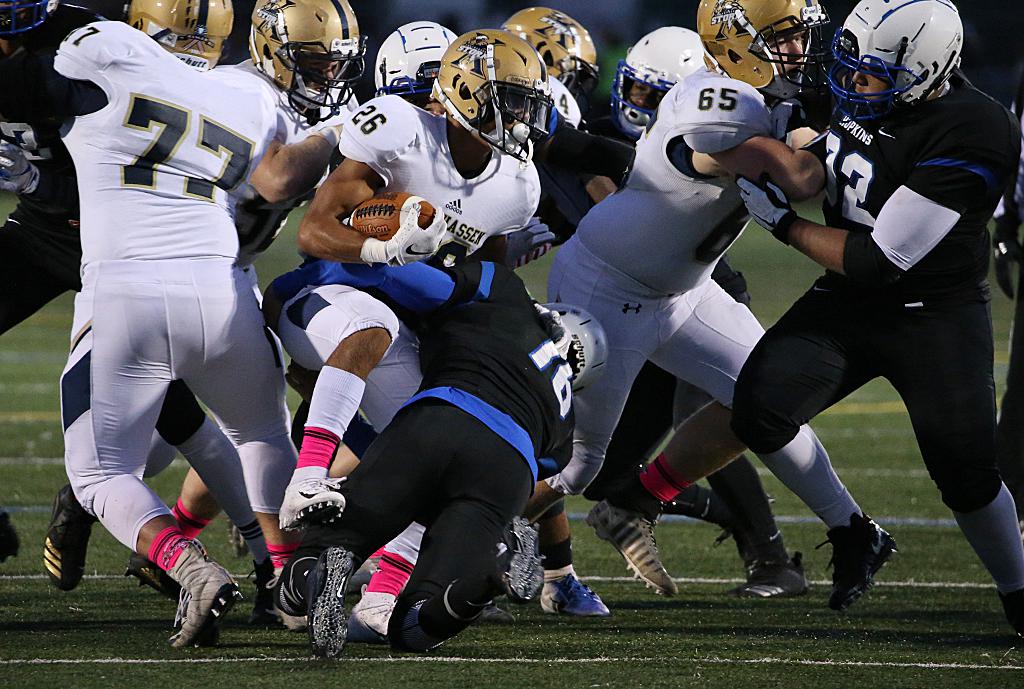 Rolando Alvarez (26) breaks through the line of scrimmage and is brought down by Royals defender James Klecker (16). Chanhassen scored 21 unanswered points and held on to defeat Hopkins 28-20. Photo by Cheryl Myers, Courtesy of Hopkins Football

Though Rolando Alvarez is playing just his first year on varsity, the Chanhassen junior running back has already earned himself a nickname: Hollywood. It originated with his flashy clothes and well-kept hair.

On Friday night he added to his legend in the fourth quarter with a run straight toward the Hopkins defense. Instead of going straight through the defenders or around them, Alvarez leap-frogged a Royal. It was a highlight-reel play for many but a 15-yard penalty in Minnesota high school football.

Though Alvarez has plenty of flashiness in his game, he was able to do the dirty work when it counted, taking the reins of the Chanhassen backfield in the fourth quarter and scoring the eventual game-winning touchdown as the Storm held off Hopkins 28-20 at Hopkins High School.

Alvarez is part of a three-headed rushing attack for Chanhassen, which is ranked No. 9 in the Class 5A Associated Press poll. He’s joined by senior running back-turned quarterback Jacob Miller and senior running back Matthew Boyum. They’ve made life tough for defenses this season, though the Storm struggled to get on the board in the first half Friday.

On two different occurrences in the opening half, Chanhassen (4-1, 1-1) turned the ball over while driving in Hopkins (2-3, 0-1) territory. The Storm finally breached the end zone with 10 seconds remaining in the second quarter when Miller hit senior wide receiver Regan Tollefson with a pass in the back corner of the end zone making it 7-0.

“They got into a lot of defensive fronts that made us guess a little,” said Chanhassen coach Mike Bailey. “But we wanted to come into the half strong and come out of it strong again. It’s something we preach a lot.”

The Storm accomplished the latter part of Bailey’s philosophy in the third quarter thanks mostly to Miller and Boyum scampering all over the field. Each scored early in the second half to make it 21-0 Chanhassen.

“They’ve been good in showing me the ropes,” Alvarez said of his senior teammates. “They showed me what it’s like to be successful in a varsity game.”

The Storm’s three-touchdown lead quickly dwindled thanks to a pair of touchdown passes delivered by Royals senior quarterback James Klecker. He was the catalyst for Hopkins throughout the game, throwing for three touchdowns and 211 passing yards.

“He’s a do-everything kind of guy,” Hopkins coach John DenHartog said. “He’s someone who does everything well from being a student to a strong athlete.”

With the Royals nipping at Chanhassen’s heels, the Storm got a 48-yard run from Boyum. But after the play, Boyum came up with an ankle injury which left Alvarez to finish off the job.

He did just that.

The junior got the ball on every play following Boyum’s injury and scored a 1-yard touchdown less than a minute into the fourth quarter to give the Storm breathing room.

“I knew I had to take it over,” Alvarez said. “We’re a good team and we have great leaders that get us there week in and week out.”

He continued to carry the majority of the workload as Chanhassen tried to run out the clock. The strategy paid off as the Storm defense allowed just one more touchdown to finish off the win.

After the game, Boyum had an icepack around his ankle. Though his status going forward is unclear, Alvarez appears to be someone Chanhassen can rely on in the backfield and for a little flash on and off the field.

“You don’t know what he’s going to do,” Bailey said. “He left us surprised tonight with that hurdle. I never thought I’d have to tell a player it wasn’t OK to hurdle someone else.” 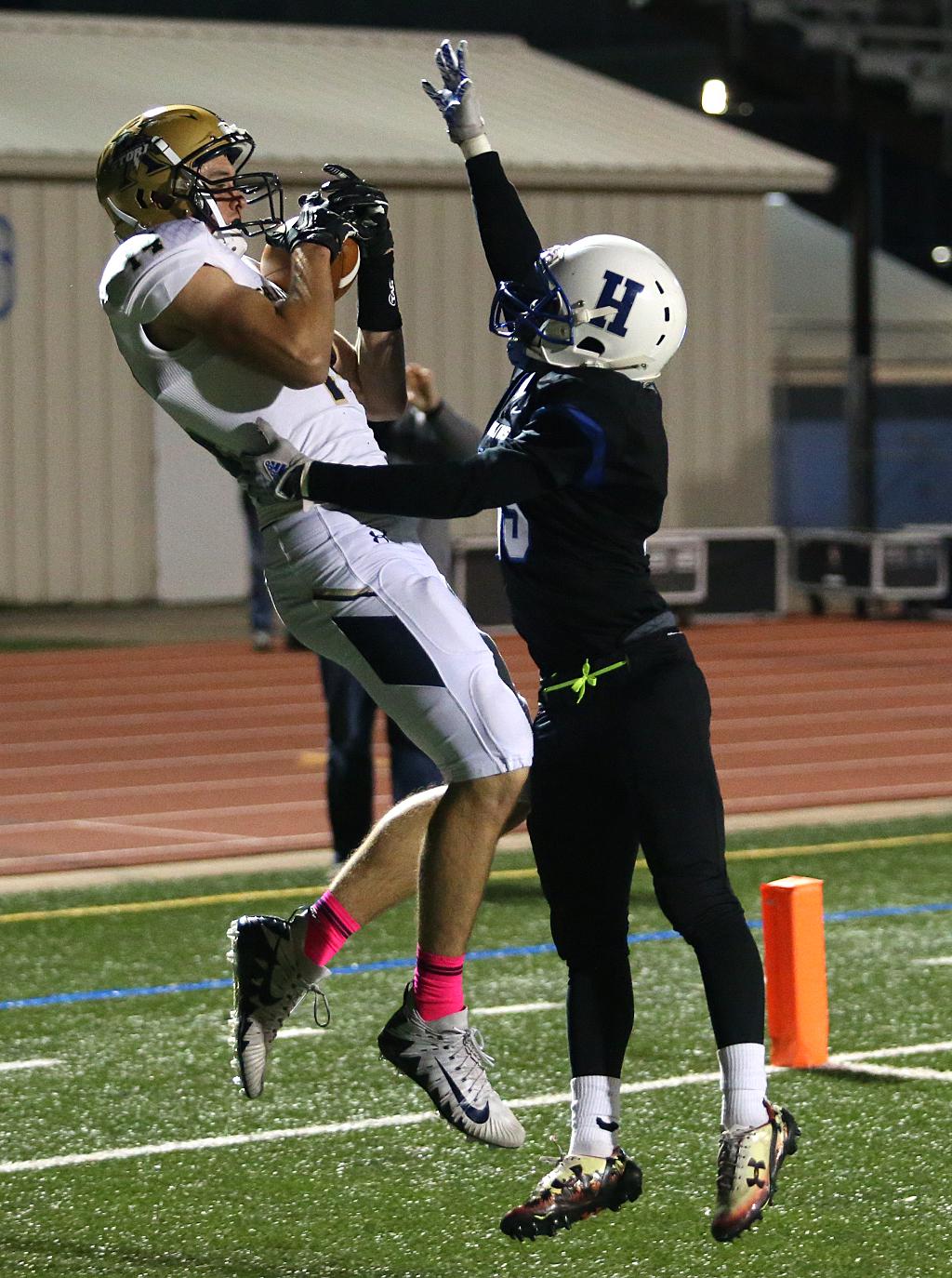 Regan Tollefson (14) pulls down a 22-yard pass with only 10 seconds left in the first half. The Storm took a 7-0 lead into halftime at Hopkins High School. Photo by Cheryl Myers, Courtesy of Hopkins Football

The two defenses held tough in the first half as the Storm, ranked No. 9 in the Class 5A Associated Press poll, managed to keep the Royals off the scoreboard.

With 10 seconds left in the first half, the Storm (4-1, 1-1) broke through when senior quarterback Jacob Miller hit senior wide receiver Regan Tollefson in the back corner of the end zone to put Chanhassen ahead 7-0 at halftime.

In the third quarter, both offenses came alive. The Storm went ahead 14-0 when Miller ran in a touchdown from 2 yards out. Then Chanhassen senior running back Matthew Boyum scored to make it 21-0. Boyum was the Storm’s leading rusher with 126 yards on 11 carries.

Hopkins (2-3, 0-1) got back within eight with a pair of passing touchdowns from senior quarterback James Klecker to junior wideout BJ Murff. Klecker finished with 211 passing yards and three touchdowns.

In the end, the Storm’s rushing attack was the difference as they finished with more than 250 rushing yards. Chanhassen junior running Rolando Alvarez scored the eventual game-winning touchdown on a 1-yard scamper early in the fourth quarter. 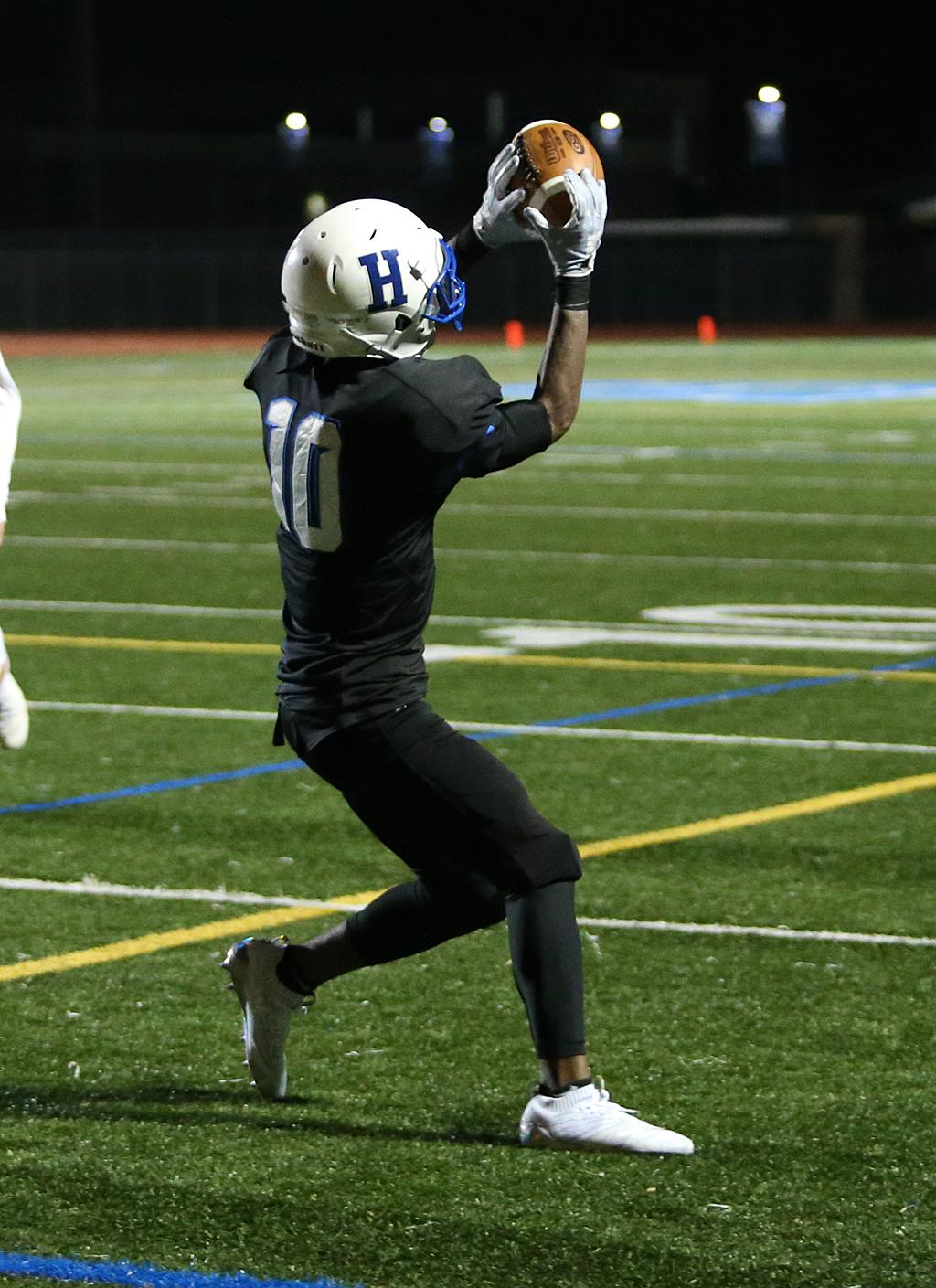 Brayonne Murff is left alone in the end zone and pulls in one of his two touchdown receptions in the game. Hopkins fell 28-20 to Chanhassen despite holding the Storm scoreless through most of the first half. Photo by Cheryl Myers, Courtesy of Hopkins Foot