Brian Orellana-Lopez led the Panthers to victory with 16 carries for 144 yards and a touchdown.

A two-game skid toward the middle of the season can test a team — especially when the two losses are by a combined two touchdowns.

But in a game that was a microcosm of the season thus far, the way Spring Lake Park responded against Coon Rapids Friday in a 21-14 win might be indicative of how the Panthers can finish the year.

Spring Lake Park won its first two games, but dropped a 35-28 decision at Robbinsdale Cooper on Sept. 14 and then suffered a 14-7 loss to Hopkins a week ago. Against Coon Rapids, the Panthers scored two touchdowns in the opening quarter, only to see the Cardinals tie the game in the second quarter.

“It’s kind of similar to how our season went; the fast start, slow in the middle, and we were able to come out in the second half and do enough to win,” first-year Panthers coach John Stewart said.

Brian Orellana-Lopez got the go-ahead touchdown on a 29-yard run where he burst untouched up the middle of the field early in the fourth quarter. He’s part of a three-headed monster in the backfield of Spring Lake Park’s split-back veer offense — Orellana-Lopez had 144 rushing yards and a touchdown, while quarterback Zach Dunbar rushed for 94 and a TD, and running back Derric Bergman had 52 yards and a touchdown.

“I think we’re all different in every way, every aspect,” Orellana-Lopez said. “Zach, he’s just our leader. Same thing with Bergy, he can do a lot of things. I just follow them. I just listen to them, do what they have to say.”

It wasn’t just responding to break the tie, either.

Spring Lake Park drove the ball to the red zone to end the first half, but couldn’t get any points out of a few shots at the end zone, and had other missed chances as well.

The Panthers marched down to the Cardinals’ 1-yard line to open the second half, but Bergman fumbled the ball into the end zone, which was recovered by Coon Rapids (3-2, 1-0) for a touchback. But the Spring Lake Park defense held, got the ball back and took the lead with Orellana-Lopez’s touchdown.

“I think that was a good part of seeing that, is the guys going, ‘Hey. That sucks. But let’s get the ball again and go coach, we got it,’” Stewart said. “That’s good to see, when they’re looking at you, eyes up, positive.”

Spring Lake Park (3-2, 1-1) had a couple chances to close the game by running out the clock, but the Coon Rapids defense held. The Panthers responded by turning the Cardinals over on downs twice in the final five minutes.

“At first we were down, but we just got past that adversity, came out in the half and just did what we had to do,” Orellana-Lopez said.

Stewart said a big part of Friday’s result was the work in practice the past week. Though Stewart is in a new role after replacing Jeff Schlieff as head coach, the Panthers coaching staff stayed largely intact, which has helped the program maintain continuity.

The lessons about responding to adversity seemed to trickle through to Friday’s game, and Stewart said he hopes it’s a lesson that can fuel success in the stretch run of the season.

“We talked about after those two losses, there’s two ways we could go: we could start getting on each other and being negative with those things. Or we could rally and build and do those things that good teams do, and be positive and pick each other up and move forward,” he said. 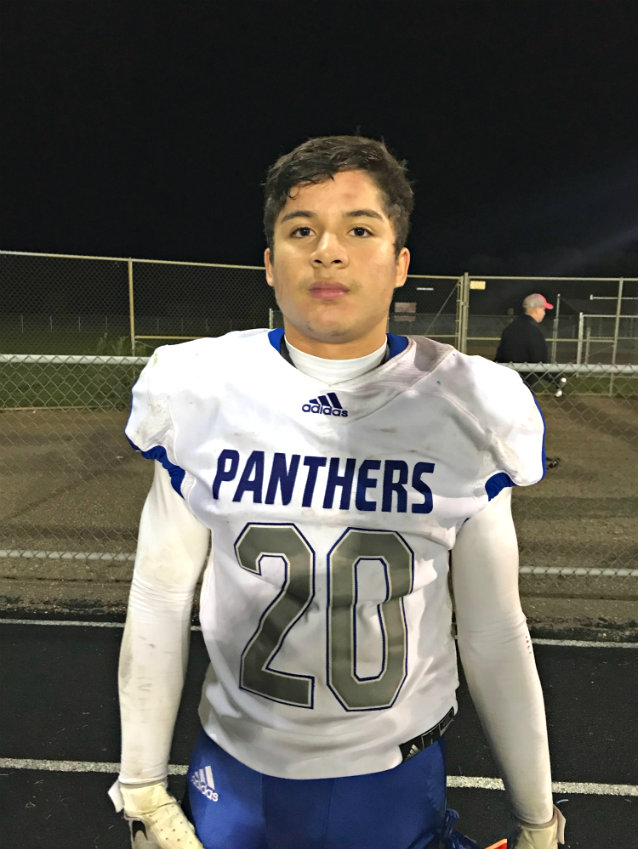 Spring Lake Park never backed down from running the ball, and it helped snap a two-game skid as the Panthers spoiled Coon Rapids’ homecoming in a 21-14 win Friday night.

Spring Lake Park’s Brian Orellana-Lopez broke a 14-14 deadlock with a 29-yard touchdown run early in the fourth quarter. The play before, he broke up the left sideline for 31 yards to set up his scoring play.

Coon Rapids got two possessions in the final five minutes to try and tie the game, but ended up turning the ball over on downs each time.

In the first quarter, the Panthers jumped out to a 14-point lead thanks to good starting field position. Derric Bergman scored on a 3-yard run and quarterback Zach Dunbar added a second touchdown, running in from 11 yards out.

Coon Rapids tied the game by scoring on two straight possessions. Quarterback Jake Van Hulzen hit Avont Shannon for a 55-yard touchdown on a play-action pass in the first quarter and Myles Taylor ran in from 4 yards out in the second quarter.

Spring Lake Park (3-2, 1-1) drove to the Coon Rapids (3-2, 1-0) 1-yard line on the opening drive of the second quarter, but fumbled the ball into the end zone where the Cardinals recovered it for a touchback.

Orellana-Lopez finished 16 carries for 144 yards and a touchdown. Bergman had 19 rushes for 52 yards, and Dunbar carried 20 times for 94 yards.

Coon Rapids’ Van Hulzen was 9 of 22 passing for 145 yards and a touchdown and Taylor finished with 12 carries for 55 yards. Shannon contributed with four catches for 100 yards.