‘Our team is in his hands,’ Raptors coach Dan Fritze said of senior Zach Zebrowski, second in the state in passing yards. 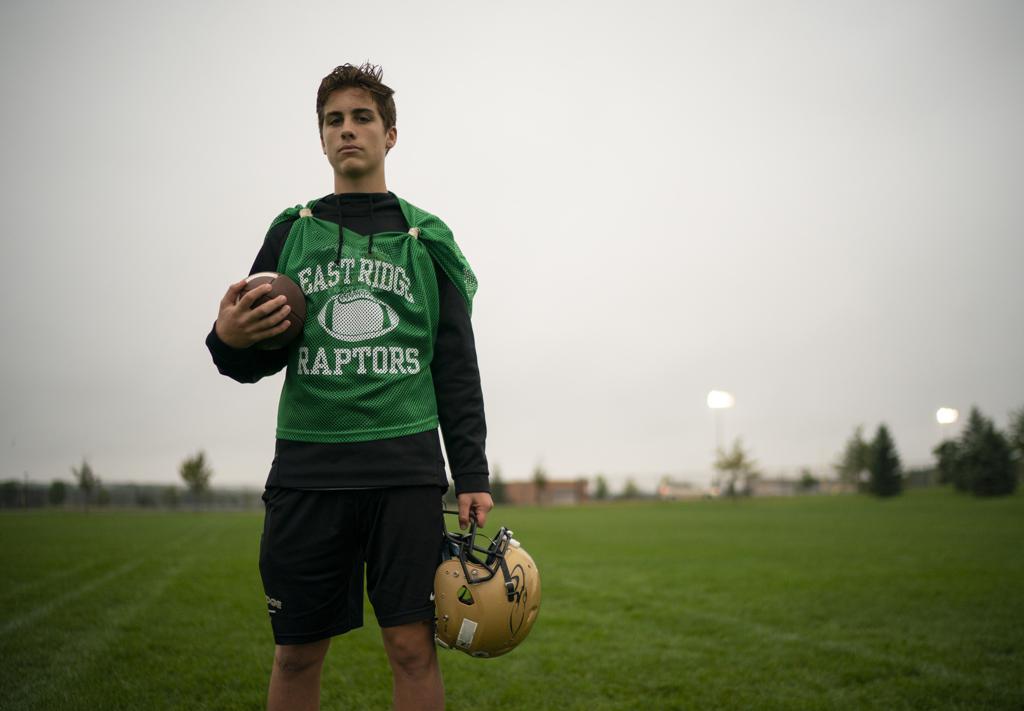 Jim, in his second season as University of Buffalo quarterbacks coach and co-offensive coordinator, made a rare in-season trip home to watch Zach start at quarterback in East Ridge’s season-opener. This beat watching his son’s highlight reels or catching live video streams.

“Oh my gosh, is he good,” Jim recalled saying as he watched the game unfold at Champlin Park. Afterward he thought, “Dang, he might have dropped back 60 times.”

Close. Zach, a senior, completed 37 of 56 passes for 416 yards, a brand of football nothing like the run-heavy attack that fueled the Raptors to the 2015 Class 6A Prep Bowl.

“One of my coaches said after the Champlin game that we threw more than we did that whole [2015] season,” Zach said.

East Ridge coach Dan Fritze conceded that a spread offense is “way out of my comfort zone. But you’ve got to do what you’re good at. I’m not going to force them into my mold, I need to fit their mold.”

Adept at making plays with his arm, feet and brain, Zebrowski is making Fritze a believer.

“He’s got moxie; he just gets it,” Fritze said. “Kids respond to him and you need that, especially when you’re throwing the ball that much. Our team is in his hands.”

Speaking of hands, Cameron Ashford, Alex Larson, Patrick Lynott and Simon Stark provide a strong receiving quartet. Three of the four — Ashford, Larson and Stark — have each posted at least one 100-yard game. And Lynott averages five catches per game.

“They all contribute and they’re all selfless so it’s pick your poison for the defense,” said Zebrowski, who leads East Ridge (2-1) into a tough Metro East District game Friday at Roseville (2-1).

Keeping his receivers happy is a welcomed problem.

“They’re always open; they always have their hands up,” Zebrowski said. “And that’s a good thing because they have confidence.”

Playing quarterback became a passion of Zebrowski’s early in his career, a role he said Jim never forced. There was no need.

“Throwing a ball always came natural to him,” said Jim, an assistant at Minnesota for five seasons starting in 2011. “I never wanted him to not want to be a quarterback by telling him a million things. If he brings it up, we’ll talk. But really, all I tell him is, ‘Stay loose, make plays and be accurate.’ ”

And one other thing: Ball security. Zebrowski logged 24 carries for 129 rushing yards and one touchdown last week against White Bear Lake. While the 6-foot, 155 pound Zebrowski ran hard, he drew his father’s ire.

“The only thing he gets mad about is when I’m running with one hand on the ball,” Zach said.

Fritze, who father, Dave, coached him at Eagan, values having a coach’s son at quarterback.

“You just look at the game differently and I can tell it’s the same for Zach,” Fritze said. “With this type of offense, sometimes I go into a game and I feel like I don’t even know what I’m going call. So Zach is a great help. We have conversations every day about how the game is going to go.”

“It’s been difficult but even when he was home, he was gone a lot coaching so I’ve kind of gotten used to it,” Zach said. “I still call him almost every day so it’s good.”

For Jim, heading back to Buffalo was tougher than ever.

“I cried,” Jim said. “It’s tough. But I can get through this because I know how happy he is to be home and finishing his senior year here. And I know he’s in good hands.”

Nicknames: Friends call him “ZZ” and his grandfather called him “ZZ Top.”
Back of the line: A last name starting with Z meant never going first. “Any seating chart, just go to the back,” Zach joked.
Sports genes: His father, Jim, played football at Division III Mount Union. His mother, Heather, played Division I volleyball at Southern Illinois.
Getting started: Born in Decatur, Ill., he moved to Woodbury in fifth grade. A year earlier, Zach started playing football.
Quote: “He tackled kids bigger than him and was jumping up and down,” Jim said. “I said, ‘Well, I guess he’s going to love football.’ ”
Hoops, too: Zach is also the point guard for East Ridge basketball team. He’s attracted college interest for his play in both sports.