Meyer is a two-way starter, helping anchor an Agates team aiming to make a deep run in the playoffs. 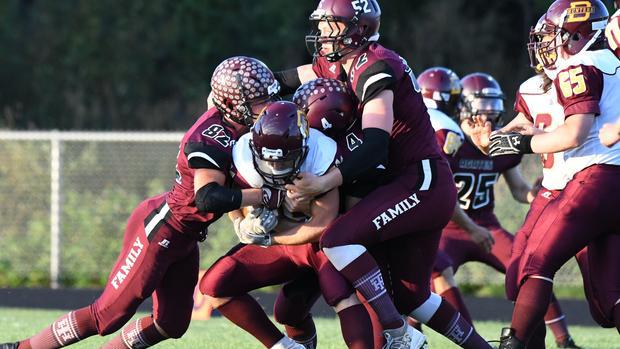 Mason Meyer (82) has led Two Harbors in tackles the past two seasons and looks to aid the Agates in pursuit of a fourth straight Northeast White subdistrict title. Photo courtesy of Steve Steve VanKekerix (stevevankekerixphotography@gmail.com).

Two Harbors' lone state tournament appearance was in 1977, a year that might predate the births of some of the parents whose children are currently enrolled at the high school in the community 33 miles up the shores of Lake Superior from Duluth. The Agates, however, have had regular-season success as of late, winning the past three Northeast White subdistrict titles.

Senior linebacker Mason Meyer has played a large part in the Agates' recent success. A menace to opposing backfields, Meyer led the state in tackles for a loss last season (17) — and has been the top tackler for Two Harbors over the past two seasons, compiling over 240 tackles and 38 tackles for a loss.

The Agates pose an aggressive, swarming defense that tries to wreak havoc on opponents, and so far, it’s worked this season. Two Harbors is 3-1 and has forced 12 turnovers — three of which Meyer has played a hand in, recovering two fumbles and forcing another.

MN Football Hub: Your team was young last year but went 7-1 in the regular season and won a third-straight championship. Did the team expect that kind of success?

MM: For the last few years — and most of Two Harbors' [history] — we’ve been the underdogs and the small school. Nobody expected much from us... We went on a roll and kept using each week's win as motivation for the next week. Things just kinda fell into place.

MN Football Hub: Did an early loss to Duluth Denfeld this season take the team by surprise after handling them well last year (41-14)?

MM: We thought we played fairly well, but we didn’t play our best. After watching tape, we realized we played super soft … and kinda deserved to lose that one because of our work ethic. Our coach says “get bitter or get better” and we knew there was only one option — to get better in the future — and we pulled out a tough win against Esko the next week.

MN Football Hub: How is the team adjusting to playing without Ricky Brenna  — a fellow three-year starter?

MM: It’s tough losing a senior captain who's played as long as he has. We've been using it as motivation — playing for Ricky since he can't his senior year. We got some guys stepping up and taking his position over, and playing for him and hoping he can make it back for the postseason.

MN Football Hub: How would you describe Two Harbors football?

MM: One of our mottos is 'FAMILY.' It stands for: Forget About Me I Love You. We want to play as a team and be really close. Everyone’s such good people off the field — volunteering and helping out in the community — and being great people. Once it’s game time, we’re going to work. We’re going to be classy but beat people up on the field.

MN Football Hub: Any fun team-bonding trips in the offseason?

MM: We had a team camp at UMD (University of Minnesota-Duluth); two nights and three days of football. At the end of it, everyone’s super sore and complaining, but that’s helped us come together.

How do you guys remedy the fatigue?

After practices in Two Harbors, we caravan out to Lake Superior and sit in the lake, which is freezing... It’s like a giant ice cube.

MM: Music. I love listening to music to get me pumped up. Usually songs of my choice... so I have to put my headphones on for a bit. One other thing we do in the locker room is some players watch "Boys of Falls" (executive produced by Kenny Chesney) before the game. We put that on and watch that and get some motivation from it.

MN Football Hub: What's a must-have postgame meal for you?

MM: After every home game we go out to a local pizza place — Do North Pizza — as the team we go down there after the game win or lose. We always look forward to that. It’s a much better atmosphere if we win, but it’s always good. Even after a loss, it helps the mood to talk about it over pizza.

MM: I want to get a 4.0 (grade point average) this year. Last year, I, unfortunately, got a B one semester, so it ruined my 4.0 GPA for all of high school. If I could get that my senior year, it would hopefully help me get into a good college.

MN Football Hub: Any ideas of your dream job?

MM: I was looking into mechanical engineering. I like creating things. I’m not 100 percent on that. Sports medicine would be a smart choice, too.