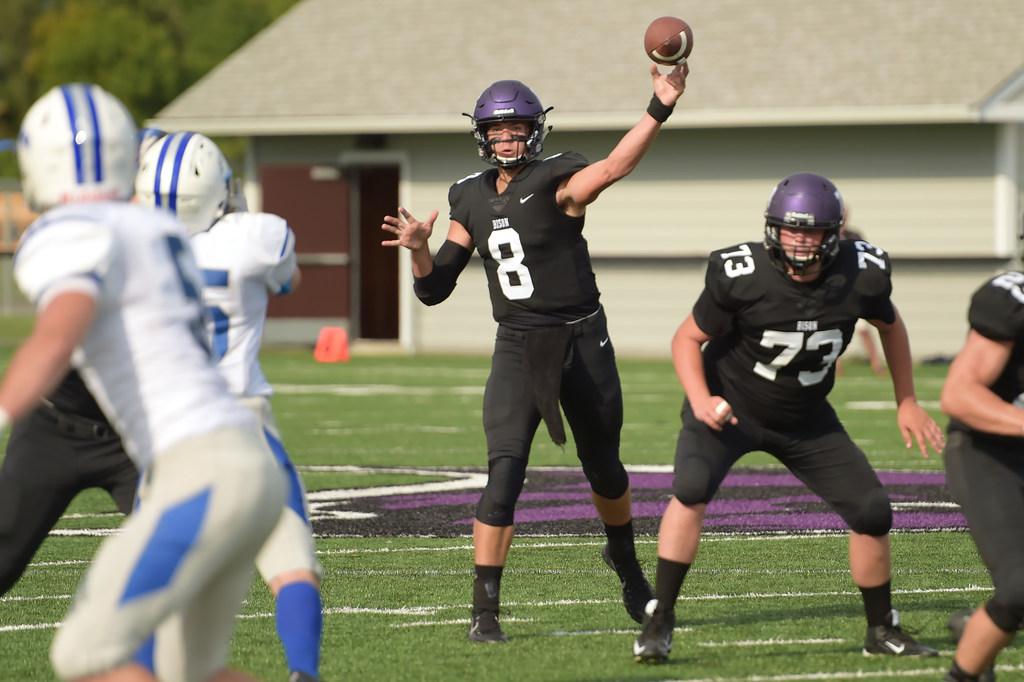 With a reputation for a high-octane passing offense, Buffalo didn’t disappoint in its 38-28 season-opening victory over Brainerd.

Junior quarterback Aidan Bouman passed for 319 yards and four touchdowns, two each to receivers Treyton Welch and Damien Biegert. But, as impressive an aerial show as the Bison displayed Friday, it was a good, old-fashioned running attack that sealed the victory.

Senior running back Riley Habisch rushed 25 times for 109 yards, including a stretch of six consecutive carries that bolstered a game-sealing 77-yard touchdown drive.

Often overlooked but not under-appreciated, Habisch provided the grit that the Bison needed whenever Brainerd made a run, and the balance that kept the passing game effective.

“I don’t mind being under the radar,” Habisch said. “The fourth quarter, when I get to grind it out, I just get pumped up and ready to go.”

“He’s just a tough, hard-nosed kid,” Buffalo coach Todd Bouman said. “He’s one of those kids where you can give it to him 15 times in a row and he can’t hardly breathe, but he’ll just keep on fighting.”

After spotting Brainerd a touchdown on its opening drive, Buffalo responded with three consecutive touchdowns to take a 21-7 first quarter lead. Welch, who normally catches touchdown passes, got a chance to show off his arm, hitting Biegert for a 50-yard score.

Biegert caught another pass two minutes later, this time from Bouman on a perfectly lofted 37-yard throw. Bouman hit Tony Dahl for a 15-yard score later in the quarter.

With Buffalo leading 21-14 in the third quarter, Bouman hit Welch for 19 yards to bump the lead to 14 points. After the Warriors answered again, the Bison embarked on their game-sealing drive, which ended with another Bouman-to-Welch score and a 35-21 lead.

Brainerd responded with another touchdown, but Buffalo capped the victory with 26-yard field goal by Parker Vajda with 47 seconds left for the final score.

“People always say we’re a big-play offense, and we do make big plays, but the biggest thing is taking what they’re giving us,” Bouman said. “Last year, we ran the ball 48 percent of the time and passed it 52 percent. So we’re more balanced than people think.”

Buffalo held off Brainerd 35-28 on the arm on quarterback Aidan Bouman, the hands of wide receiver Treyton Welch and, perhaps most importantly, the churning legs of running back Riley Habisch.

Bouman passed for 319 yards and five touchdowns, two of them to Welch. Habisch carried the ball 25 times for 109 yards to give the Bison a season-opening victory.

Check back later for more on the early-starting game due to weather concerns Friday evening.