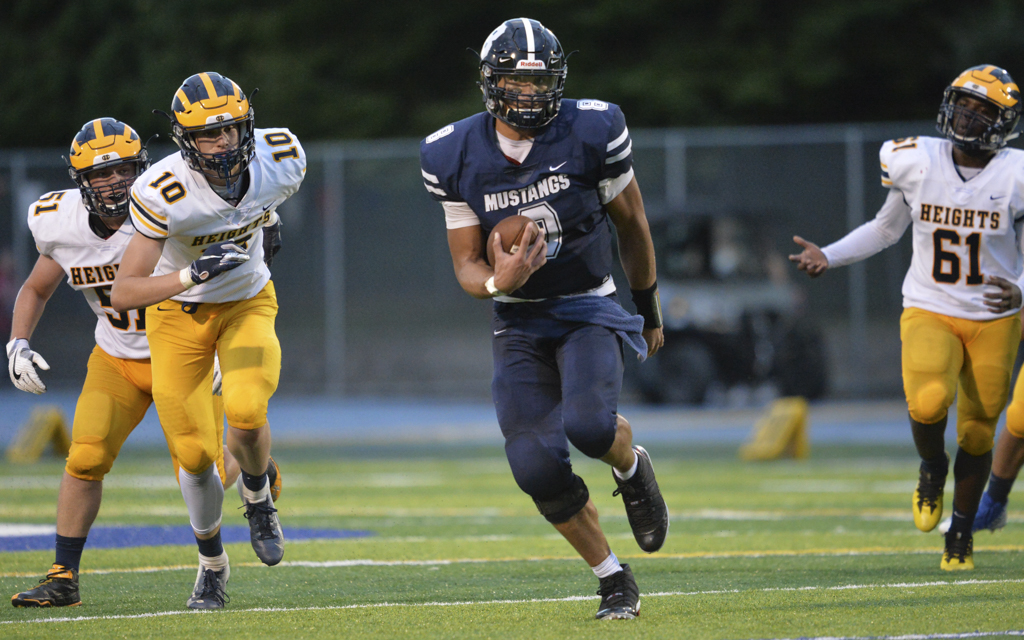 Breck quarterback David Roddy breaks out of the pocket against Columbia Heights on Friday night in Golden Valley. The Mustangs defeated the Hylanders 30-20. Photo by Earl Ebensteiner, SportsEngine

As a Division 1 recruit, Breck senior quarterback David Roddy is most known for his ability to throw passes.

However, like most of his teammates on the Class 3A football team at a school with an enrollment of 478, the 6-foot-5 player pulls double duty on the defensive side.

“I do whatever I need to do for my team to win,” Roddy said. “I’ll take a few minutes rest, and when I’m needed, I’m needed.”

Breck (1-0) needed Roddy on both sides of the ball Friday in a 30-20 home win over Columbia Heights.

First, it was with the arm. Trailing Columbia Heights 17-14 with 11 minutes left in the fourth quarter, the Mustangs quickly moved the ball down the field before Roddy found Elijah Zackery for a 38-yard touchdown reception.

Then, with less than three minutes remaining and the Hylanders threatening, Roddy intercepted a pass and returned the ball 21 yards to the end zone -- giving Breck a 10-point lead.

Roddy, who has received Division 1 athletic scholarships from both basketball and football programs, said he attended two football camps over the summer. When players there ask him what position he plays, he does not shy away from explaining the whole story.

Columbia Heights (0-1) quarterback Aaron Severson threw three touchdowns in the second half as the Hylanders erased a 10-0 halftime deficit. The junior quarterback started with a 5-yard touchdown to Isaac Becker in the third quarter.

Ben Rogotzke caught back-to-back fourth-quarter touchdown receptions of 37 and 23 yards to give Columbia Heights a 20-17 lead.

“I thought we started to get confidence, too, so we were able to keep them on their heels,” Townsend said.

Zackary led the Mustangs with two touchdown receptions, and Ethan Guell caught one. Roddy finished the game with 20 completions for 333 yards.

With game-time temperatures pushing 80 degrees, both teams dealt with players cramping by the game’s late stages. Breck coach Jon Martin said his staff needed to juggle the lineup a bit, giving some less-experienced players their first taste of the Friday night lights.

“We were down to some number twos, number threes in some positions,” Martin said. “Things just don’t run as smoothly. A lot of those kids, it’s their first time in a varsity football game.”

Breck and Columbia Heights both finished with 3-3 records in the Twin City Red subdivision last season, including a week one 37-19 win for the Mustangs between the two. 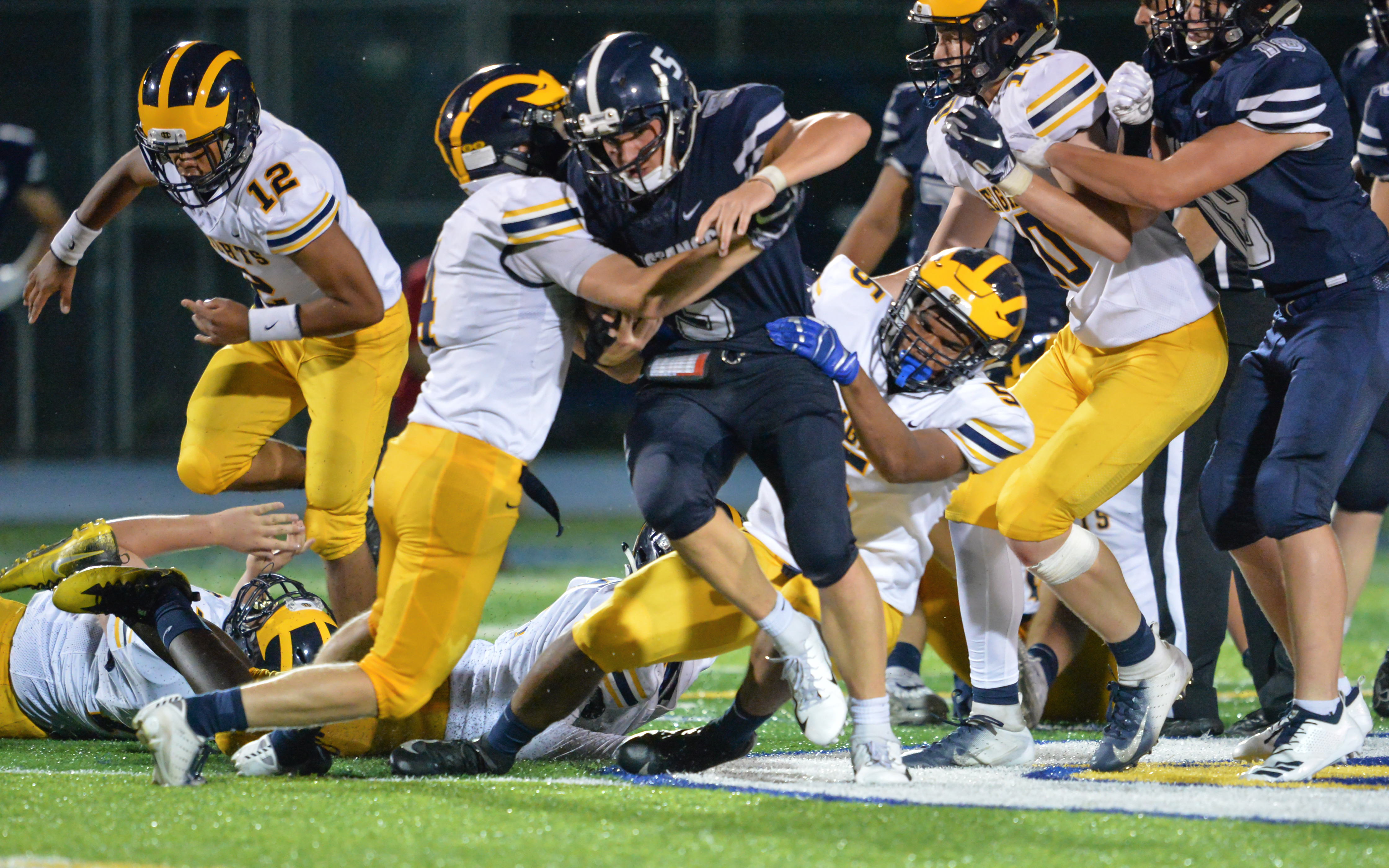 Breck junior Alex McKenna tries to break free from a Columbia Heights defender in the fourth quarter. The Mustangs prevailed over the Hylanders 30-20. Photo by Earl Ebensteiner, SportsEngine

Roddy threw a touchdown pass to Elijah Zackery and returned an interception 21 yards to lead the Mustangs (1-0) to the victory after they trailed 20-17 in the fourth quarter.

Breck led 10-0 at halftime, but quarterback Aaron Syverson and the Hylanders offense heated up in the third quarter. A touchdown reception by Isaac Becker and two by Ben Rogotzke gave Columbia Heights (0-1) a 20-17 lead with five minutes remaining in the fourth quarter.

Roddy, a senior, threw a 39-yard TD pass to Ethan Guell and another to Alex Tschinkel for 80 yards. Roddy finished with 20 passes completed for 333 yards. 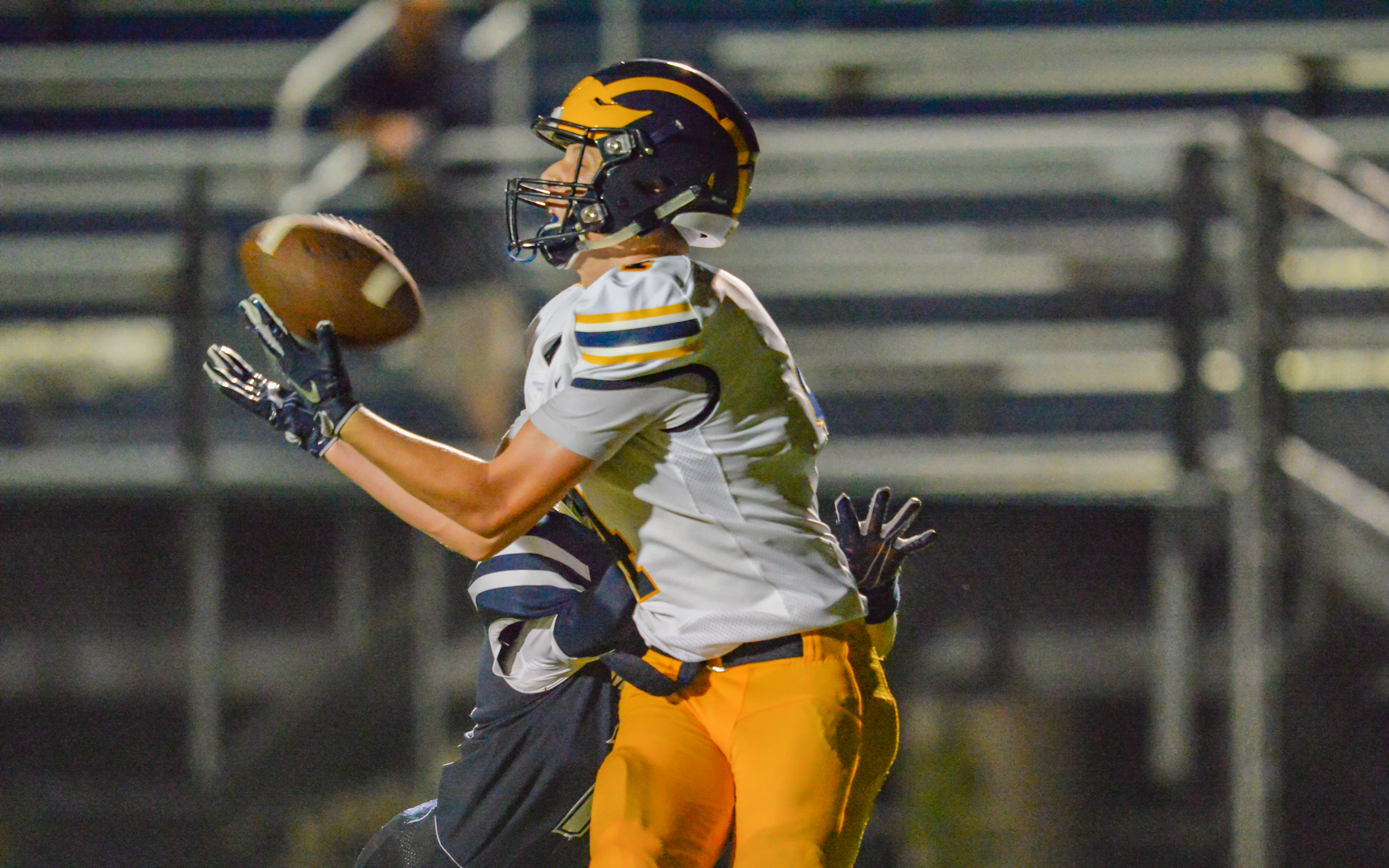