Lions quarterback Max Anderson connected with Josh Ehlen twice in the first half to keep the offense rumbling.

Over the past decade, Providence Academy has had no success whenever it played St. Croix Lutheran, losing every matchup. That all changed on Friday night, as Colin Rooney made a huge statement in his head coaching debut when his Lions shut out last year’s Class 3A runner-up team at home 33-0.

“I can’t even describe it, it’s just kind of a euphoria,” Rooney said. “There’s so much going on the first time you’re a head coach, it just kind of felt like I was hanging on and hoping things went right.”

Everything seemed to go right for the Lions (1-0) in their season opener on Friday night, as they wasted no time having success on both sides of the field.

The Lions forced the Crusaders (0-1) to punt on the opening possession, then they drove down the field for a touchdown when quarterback Max Anderson connected with wideout Josh Ehlen on an 8-yard slant to open the scoring. Ehlen scored again right before the end of the first half, reeling in a 33-yard touchdown after an effective play-action call.

Despite the two touchdown throws, Rooney said he thought his team would throw the ball better than they did. Part of this was due to the success of the running game, which was effective from the start, as Jeff Ekiyor took his first run for 40 yards.

“I thought we would have to throw the ball to the outside to move the ball,” Rooney said.

The Lions offensive line has four new starters this season, which was the main cause for Rooney’s concern. Once they showed success with running early, they kept with it. Ekiyor finished with 156 yards and two touchdowns, and the team had 218 rushing yards overall.

The defense was dominant throughout, something Rooney wasn’t surprised by.

“I wasn’t worried about our defense at all,” Rooney said.

The Providence Academy defense is filled with returning players, and the same coaching staff from last season, so they continuity had success against St. Croix Lutheran. The Lions allowed 176 total yards and came away with two turnovers. Hakim Daniels and Jacob Halek each had an interception that helped the Lions keep the Crusaders scoreless. Jonathan Liesener led the Crusaders in yards, as he ran for 51 and added 43 in the air.

Rooney called St. Croix Lutheran “a program you aspire to be,” and complemented the Crusaders’ ability to get to the state tournament every year. A big reason why the Lions were able to defeat the Crusaders for the first time is due to senior leadership.

“We’re a senior dominant team, and I think they have a lot more younger guys and sometimes you just get seniors and that makes all the difference,” Rooney said.

That was true on Friday, as key contributors like Anderson, Ehlen and Ekiyor are all seniors.

After the win, Rooney expressed he wants his team to celebrate, giving a clear message in the post-game huddle. 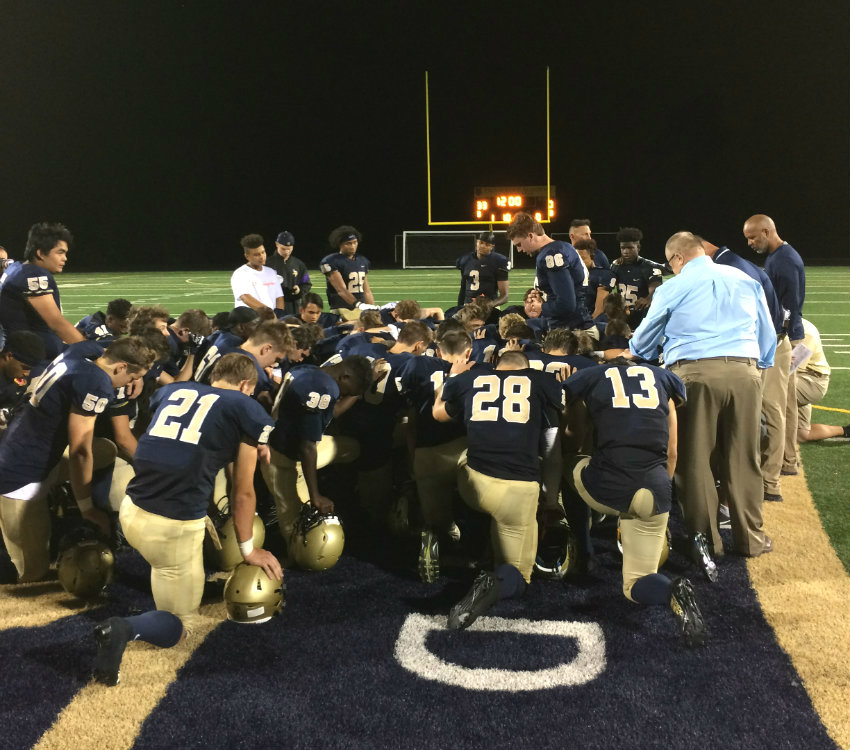 Providence Academy opened its 2018 season with a 33-0 home win Friday over St. Croix Lutheran -- the program's first-ever victory against the Crusaders.

Quarterback Max Anderson connected twice with receiver Josh Ehlen, including an 8-yard pass on the Lions’ opening possession. Ehlen added a second touchdown near the end of the first half, a 33-yard catch after a play-action caught the Crusader defense by surprise.

The Lions kept the ball on the ground most of the second half and running back Jeff Ekiyor scored twice in the fourth quarter. He finished the game with 156 yards on 14 carries.

The Lions’ defense stifled the Crusaders passing attack, giving up a mere 43 yards and forcing two interceptions. Hakim Daniels and Jacob Halek had the two takeaways that helped the Lions complete the shutout.