The Gopher-bound Swiss Army Knife in cleats wants the ball early on Friday nights and wants it often. 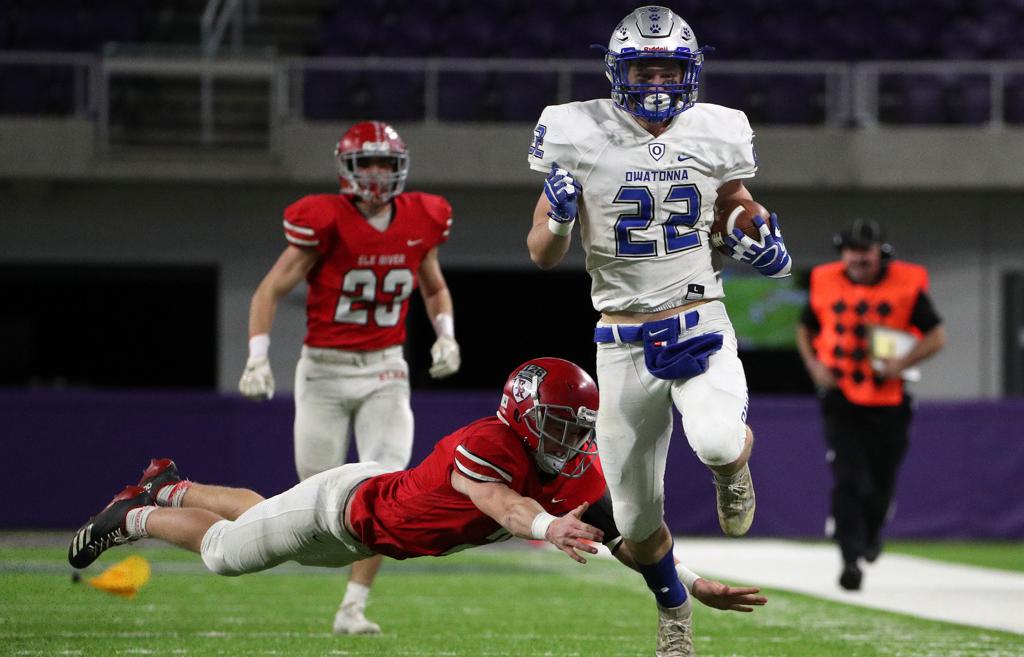 With greater speed as his goal, Owatonna standout running back Jason Williamson performed barefoot workouts on the track this summer.

Unconventional? Sure. But Williamson is willing to do whatever is necessary to ensure success. That meant becoming a Swiss Army Knife in cleats as a junior last season. He rushed for 2,326 yards, scored a total of 44 touchdowns and intercepted six passes to spur Owatonna to the Class 5A Prep Bowl title.

A few weeks later he verbally committed to the Gophers on the same day as Eden Prairie quarterback Cole Kramer.

Owatonna coach Jeff Williams puts Williamson in the same category as former southern Minnesota products Kent Kitzmann and Darrell Thompson, both of whom dominated for Rochester John Marshall and the Gophers. Both competed for Jeff’s father, Snuffy; Kitzmann as a thrower in track and field in the 1970s, Thompson on the football field in the late 1980s.

“They are all the kind of guys you can rely on,” Williams said. “They give an A-plus effort on Friday night.”

Williamson, named Minnesota’s Gatorade Player of the Year after last season, typically wanted to give more than his coaches deemed necessary.

“He’s a shy and humble kid off the field,” Williams said. “But if we call a QB sneak at the goal line and we don’t get in, Jason will turn and give us a look like, ‘Why are you not giving me the ball?’

“And he can get very irritated when we pull him out for a series. And we pull him from some games earlier than he would like. But if you’re planning to play in November at U.S. Bank Stadium, it’s a marathon, not a sprint.”

Away from the field, Williamson understands.

“It’s nothing against our other guys, I just like to have the ball in my hands,” said Williamson, who measures 6-2 and 205 pounds and runs the 40-yard dash in 4.6 seconds. “It’s just a mind-set that comes from having a lot of confidence in myself.”

A new challenge awaits this season, which begins Friday on the road against Faribault. Owatonna graduated its explosive passing game, starting with quarterback Abe Havelka. What Williamson is in the open field, Havelka was under center. He threw for 3,154 yards and 40 touchdowns. Graduation also claimed three receivers with a combined 2,466 yards and 34 touchdowns.

Younger brother Sol Havelka, part of a junior class that has lost just one game since seventh-grade, takes over at quarterback. Williams said “play-action passes are key because their job is to take pressure off Jason. You’re going to get fired as a defensive coordinator if you don’t try to stop Jason.”

Brainerd game-planned for Williamson in the state tournament semifinals and Abe Havelka tore it up, throwing for 451 yards and seven touchdowns.

Williamson is certain that the retooled offense remains potent. The unit made plays against Cretin-Derham Hall, one of the top Class 6A teams, in a scrimmage last Saturday.

“I know some people who don’t believe in us because of the guys we lost,” he said. “But we’re pretty confident among ourselves because a lot of younger guys got playing time in games where we were ahead and they are excited to step into their roles.”

Williamson’s role as team catalyst is already defined. And coaches are content to let him go.

“We don’t talk to much about running with him because he’s more talented than anyone coaching him,” Williams said jokingly.

A season in five games

Five playoff games in 2017 turned a great season by Owatonna running back Jason Williamson into the stuff of legend.
Rushing: 943 yards, 17 touchdowns.
• In three games he ran for 222 yards or more.
Receiving: 188 yards, one TD
Kick returns: 156 yards, one TD
Interceptions: Four
Prep Bowl prowess: In the Class 5A championship against Elk River, Williamson produced 343 total yards and tied the Prep Bowl record with
six touchdowns.