The talented two-way lineman had reopened his recruitment in mid-December. 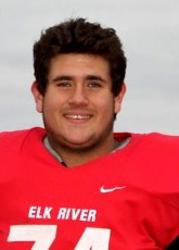 Elk River two-way lineman Ronald Audette has announced on Twitter that he has committed to play football at Oregon State.

The 6-3, 305-pound senior had given a verbal commitment to North Dakota State last fall. In mid-December, he told coaches there that he was reopening his recruiting process amid of flurry of interest from Division I schools before the NCAA’s early signing period that began Dec. 20.