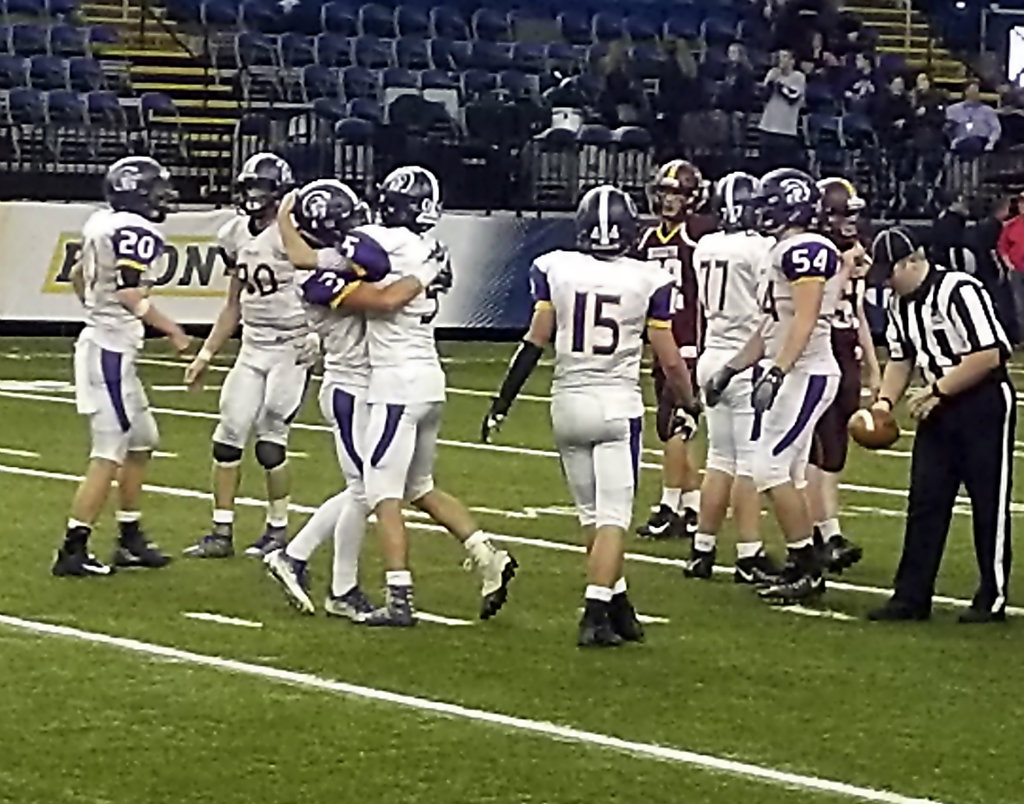 Members of Barnesville and Hawley preparing to line up during the Class 2A, Section 8 final in the Fargodome Friday night. The Trojans won 29-22. Photo by Matt Bigelow, SportsEngine

Hawley defeated Barnesville 48-30 three weeks ago in the Battle for Lee’s Paddle. On Friday, with a state berth at stake, the Trojans got even and then some in the rematch.

The Trojans (10-1) got a late interception and touchdown run from Jackson Wahl and used a staunch defensive effort to knock out the top-seeded Nuggets 29-22 at the Fargodome in the Class 2A, Section 8 final, securing a spot in the Class 2A state tournament.

“We just had our kids believing,” said Barnesville coach Bryan Strand. “Anything is possible. How many two seeds knocked off ones. It was the year of the two seed. We said ‘guys they haven’t seen your best. Give them your best.’ We didn’t take anything for granted. We were going to give them our best. We respect the hell out of them. Any time you can beat Hawley, I just think our kids played great.”

From the Hawley (9-1) sideline, a similar sentiment was shared regarding the quality of the teams meeting.

“You don’t expect anything less out of this matchup,” said Hawley coach Peder Naatz. “People thought the over/under would be in the 80s. I knew it wouldn’t be that way. They had more punch than we did tonight.”

A back-and-forth affair throughout the game, it looked like Hawley had all the momentum late, driving from its own 10-yard line all the way down to the Barnesville 29. With the game knotted at 22, Jackson Wahl intercepted Jacob Vetter and returned the pick back down to the 18-yard line. And with 1 minute, 57 seconds left, Wahl scored a 6-yard touchdown to put the Trojans up for good.

“I was just dropping in my coverage,” Wahl said of the interception. “As soon as I caught it I wanted to score. I didn’t score there but we were able to put it in at the end.”

Neither team led by more than a score. But after watching the Nuggets racked up more than 500 yards of offense and piled up 48 points three weeks ago, the Trojan defense wasn’t going to let offense be the story.

The key was slowing down star running back Donnie Loegering, who rushed for 182 yards and four scores in the prior matchup. He was held to just 87 yards Friday night, making it clear from the start that the Trojans weren’t going to let him dominate them again.

“Our coaching staff is great here,” said senior running back Brady Tweeton. “It’s one of the best in the state. We made adjustments and everybody knew what we had to do. We had to slow him down.”

Tweeton’s greatest impact may have come on the defensive end, but he also keyed the offense rushing for 100 yards and two touchdowns. Wahl had his fingerprints all over the offensive output as well, adding 105 yards and two TDs.

“We know they got a high-powered offense so we wanted to control the ball,” said Wahl. “Keep the ball away from them. We executed well on both sides and didn’t make any big mistakes and in a game like this that is huge.”

The Nuggets, ranked No. 3 in the Class 2A Associated Press poll, won an emotional game in October, earning a win in a storied rivalry that now includes a trophy. Both sides knew that it would likely be the first of two matchups. And it was everything a rematch featuring two of the five best teams in the state should be. The Trojans just came out on top.

“I will take that trade,” Tweeton said. “Playoffs is more important. We wanted the Paddle for sure and it hurts that we didn’t get it. But we’re going to state baby.”

Naatz expressed No. 7-2A Barnesville's potential to make some noise in the state tournament.

“If they play with this toughness, I think they’ve got a great shot at getting to the semis,” said Naatz. “If they play like they did, whoever they see will have their hands full. It comes to how well they scout. I give them all the credit. They were tougher than nails tonight.”

Barnesville will face Paynesville in the first round of the state tournament at 7 p.m. Thursday, at Alexandria High School.

If there would’ve been a scoring line on the rematch between Hawley and Barnesville in the Class 2A, Section 8 final, it likely would’ve been in the high 70s. Barnesville wasn't going to let the game follow that kind of script in the Fargodome Friday night.

The Trojans (10-1) used stifling defense, timely turnovers and savvy clock management to pick up a 29-22 win over top-seeded Hawley (9-1), earning a spot in the Class 2A state tournament.

It looked like Hawley, which is ranked No. 3 in the Class 2A Associated Press poll, was on its way to taking a late lead until Jackson Wahl intercepted Nugget quarterback Jacob Vetter with less than three minutes to play. Wahl scored on the ensuing drive from 6 yards out to turn a tie game into a No. 7-2A Trojans lead that they wouldn’t relinquish.

Wahl and senior running back Brady Tweeton each scored two rushing touchdowns but the big key may have been the Trojans’ collective defensive effort against Donnie Loegering. After piling up 182 yards and four touchdowns in the previous matchup, Loegering was held to just 87 yards in the rematch.