Top-ranked Eden Prairie football misses out on first round bye

The Eagles are the only undefeated team in Class 6A, but a random draw of the four No. 1 seeds gave the bye to Cretin-Derham Hall. 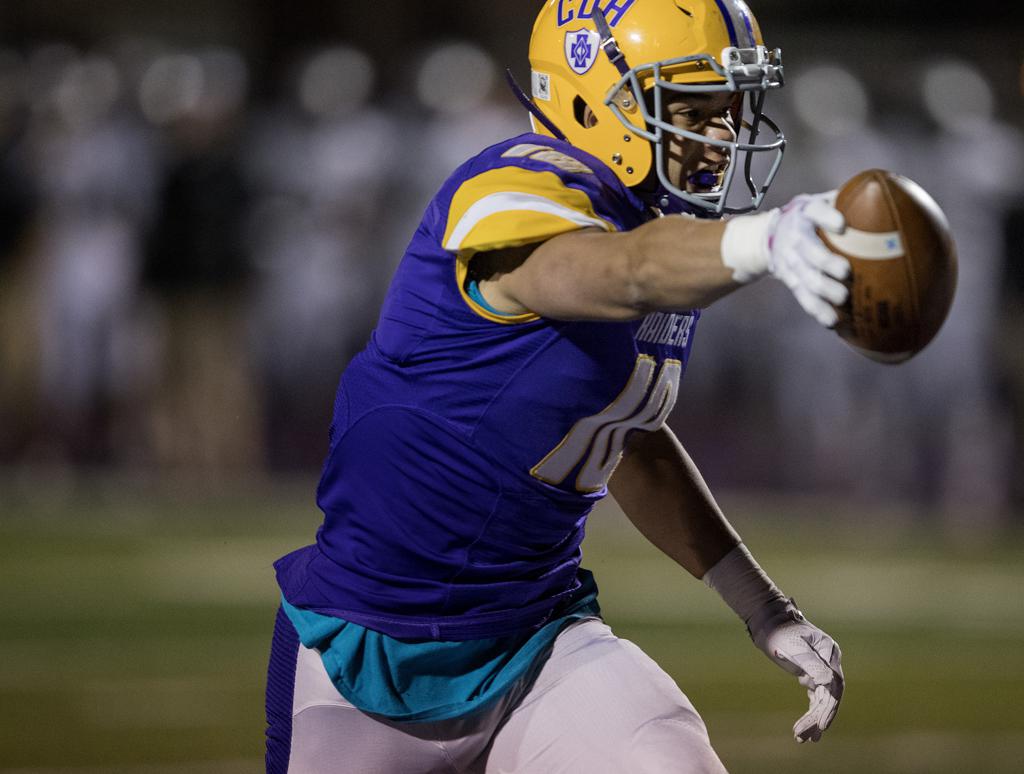 Jacob Prince of Cretin-Derham Hall ran into the end zone after a catch for a touchdown in the second quarter Wednesday against Roseville. Photo: CARLOS GONZALEZ * cgonzalez@startribune.com

After his team defeated then-No. 2 Minnetonka last week, Eden Prairie coach Mike Grant made a plea for the Eagles to get the bye that one of the top seeds in the Class 6A playoff bracket was going to receive.

“Whoever is ranked No. 1 should get that bye,” Grant said. “That bye is a huge advantage. If you go and beat three No. 2 teams, if we beat Edina (which the Eagles did, 35-10 on Wednesday), you should get it.”

Grant’s sentiment was reasoned with the logic that the Eagles are the only undefeated team in Class 6A. But the matchups in the 6A brackets were determined randomly after each of the four sections seeded their teams.

Thus, the coveted bye was awarded to Cretin-Derham Hall (6-2), which earned the No. 1 seed in Section 4 on the strength of a season-ending four-game winning streak, punctuated by a 19-14 victory over Roseville Wednesday.

Eden Prairie got the top seed in Section 6. The other top seeds in 6A went to Prior Lake (Section 3) and St. Michael-Albertville (Section 5).

The need for a bye was created by a drop in the number of Class 6A programs this season, from 32 to 31.

While St. Michael-Albertville and Eden Prairie were assured of getting the No. 1 seed in their sections based on their overall records, the seeding in Section 3 was the most unclear heading into Thursday’s section meeting. Three teams – Prior Lake, Rosemount and Lakeville North – all finished with 5-3 records. Rosemount appeared to have the advantage before Wednesday’s games, but the Irish had their five-game winning streak stopped by Shakopee, 19-14.

The No. 2 seeds in 6A went to Minnetonka, Centennial, Roseville and Lakeville North. The No. 3 seeds went to Rosemount, Edina, Maple Grove and defending champion Totino-Grace.

That meant that some very good teams found themselves with second and third seeds. Owatonna, which was ranked No. 1 briefly before losing to Northfield, was seeded No. 2 in Section 1. Traditional power Mankato West found itself with a No. 3-seed in Section 2, behind Chaska and Chanhassen, despite having just one loss, to Winona, the No. 1-team in Class 4A. Chanhassen has a 6-2 record but was given the No. 2-seed based on a higher QRF (Quality Results Formula) ranking.

Brainerd was given the No. 1 seed in Section 8 despite having the same record as No. 2-seeded Moorhead (both 6-2) and a lower QRF ranking. The Warriors defeated the Spuds in their next-to-last game of the season.

The QRF is an algorithm used by many sections that ranks teams according to non-subjective factors such as wins and losses, opponents’ victories and class differential.

With the exception of Class 6A, the section playoffs begin Tuesday. Many of the top teams will not be in action, however, having earned a first-round bye. The Class 6A playoffs begin Oct. 27.