Jalen Suggs, David Roddy and Bennett Otto excel both on gridiron and hardwood 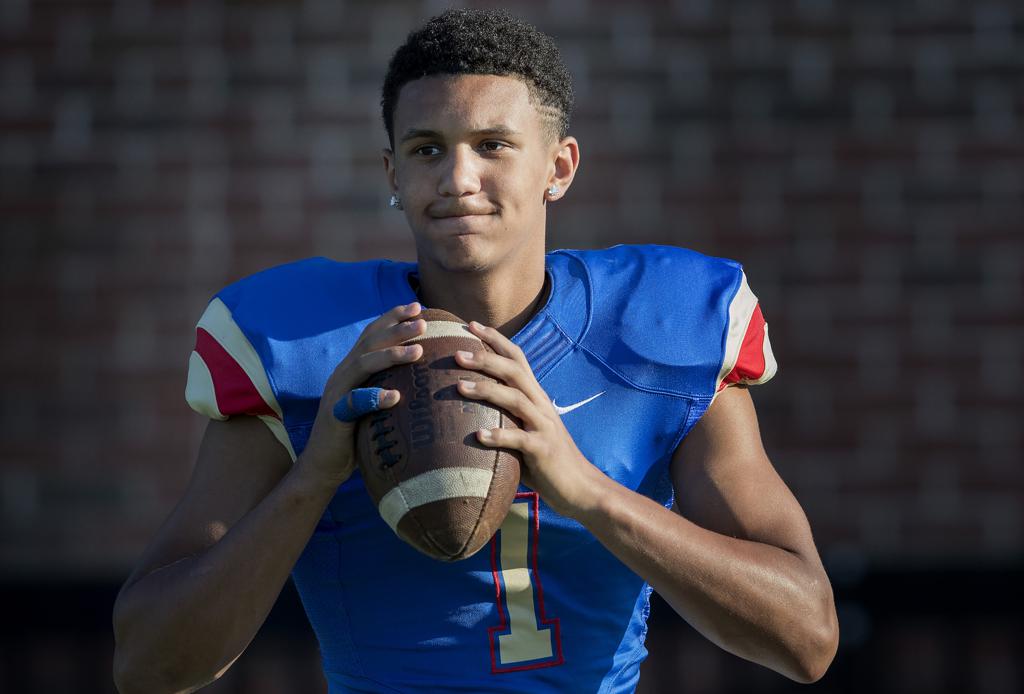 It was just a scrimmage, and an intrasquad one at that, but one pass from the right hand of Jalen Suggs was enough to show just what all the fuss is about.

On the fourth play, the SMB (St. Paul Academy/Minnehaha Academy/Blake) Wolfpack’s 6-3 sophomore quarterback took the shotgun snap, dropped back two steps, pivoted right and released. With a seemingly effortless flick of the wrist, a perfect spiral cut 30 yards down the middle of the field, hitting a receiver running down the seam in stride.

A big-time throw from a big-time athlete, the kind that makes scouts take note.

And football might not even be his best sport.

Suggs is in charge of his high school football team barely two months removed from leading Team USA to the championship of the FIBA Americas Under-16 basketball tournament in Argentina. In March, he guided Minnehaha Academy to the Class 2A boys’ basketball state title. College basketball offers are rolling in, but there’s no chance of Suggs focusing on the hard court exclusively.

“I call myself an athlete,” he says simply. “I wouldn’t be able to differ between those sports. I’ve got equal love for both.”

How good can Suggs be? “The Michigan offensive coordinator doesn’t come to my office unless they see something they like,” SMB coach Collin Quinn said.

While Suggs is the highest-profile prep basketball star-turned-quarterback set to show his stuff under the Friday night spotlight, he’s not the only one.

Breck junior David Roddy is an imposing 6-5 and a muscular 245 pounds. Roddy has two Division I basketball offers — from North Dakota and Northern Iowa — but has a long way to go before he is forced to decide which sport he will pursue after high school.

“I’ve had a lot of people tell me I’ve got great potential as a quarterback and that’s gratifying,” said Roddy, who played summer basketball for the same Howard Pulley AAU team that featured Tre Jones, Daniel Oturu and Jarvis Thomas. “Basketball takes up a lot of my time, but my dad keeps reminding me, ‘You’re still a football player.’ ”

Breck coach Jon Martin says Roddy is a “no-brainer” when it comes to college football possibilities. “He’s got an NFL body as a junior in high school,” Martin said. “With his ability to move that body and his skills as a leader, this kid is something special.”

Champlin Park, which reached the Class 6A semifinals last year, had sophomore Bennett Otto at QB much of the season before he suffered a broken collarbone just before the postseason. The lanky 6-4 Otto has been turning heads in basketball since middle school.

“I played on the same team as David Roddy in seventh grade,” Otto recalled. He is leaning toward basketball over football, but admits that his future might lie in football.

“Football comes more naturally to me,” he said. “I might have better chances for college in football than basketball.”

Playing quarterback and excelling at basketball has precedent.

Current Gophers wide receiver Tyler Johnson was an All-Metro selection as quarterback for Minneapolis North in 2015 and was a high-flying guard for the Polars’ Class 1A champion basketball team later that school year.

Maple Grove’s Brad Davison was the Metro Football Player of the Year last year, but he chose to play Division I basketball at Wisconsin.

This year, however, there are simply more players who star in both those two sports. From southeastern Minnesota, Caledonia senior Owen King has been dazzling for both of the Warriors’ two recent Class 2A championships. He threw for nearly 5,300 yards and 92 touchdowns combined in his sophomore and junior seasons.

Yet the 6-3 King decided his future was in basketball when he gave a verbal commitment last fall to play for South Dakota State.

While deciding which sport to play in college is a matter of personal preference, playing quarterback and basketball share similar traits that might explain why being good at one often spills over into success in the other.

As the biggest player on Breck, Roddy also is a defensive lineman. He said basketball keeps him agile for football.

Roddy, Suggs and Otto each credit their fathers for their love of football. Otto’s dad, Brent, was a standout wide receiver for St. Cloud State in the mid-1980s. “I’ve always played football,” the younger Otto said. “Even thought I like basketball a little better, I love football and the preparation for it. That’s because of my dad.”

Both Suggs and Roddy cited time spent at home — Roddy in the backyard, Suggs in the living room — playing catch with their dads for instilling a passion for football. “I’m blessed to have this body and a father who would throw the football around with me,” Roddy said.

After returning from Argentina, Suggs took about a week to let his body rest, then leaned on his father, Larry, to get his arm in shape. “It took my arm about a week of going and throwing with my dad to adjust,” Suggs said. “I’ve been doing that since I was little. My dad taught me everything I know about football.”

All three put up impressive numbers last season. Suggs passed for 1,588 yards and 15 touchdowns as a freshman. Roddy missed a month because of a sprained knee but still threw for 982 yards and nine touchdowns. Before his collarbone injury, Otto passed for 1,492 yards and 12 touchdowns in nine games.

Suggs and Roddy are both healthy and poised to break out. Otto injured his back during summer basketball and hasn’t had a chance to practice yet, but he expects to be back by the third game of the season.

For each, a potential future in basketball appears certain. Yet all say that playing football is very much a possibility when they graduate. The thrill of playing on Friday nights and the unparalleled camaraderie that goes along with the game still resonate, even if basketball takes up a far greater share of their time.

“I get asked a lot which sport I want to play, but right now I’m just a 16-year-old kid having as much fun as I can playing both sports,” Roddy said. “When I finally have to make the decision, it will be tough to make.”