Krebs, a Lakeville alum, was Burnsville's coach for six seasons. 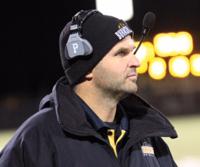 Tyler Krebs is leaving his position as football coach at Burnsville High School to take over as head coach at Lakeville South.

Krebs, who coached Burnsville for six seasons, will fill the vacancy created by the retirement of longtime Lakeville coach Larry Thompson. Krebs, who played under Thompson while attending Lakeville High School, also was a language arts teacher at Burnsville.

“Our goal was to hire both an outstanding teacher and an outstanding football coach. Tyler’s previous principals identified him as an exceptional teacher whose impact went well beyond his classroom to positively and significantly impact their entire building’s culture,’’ Lakeville South Principal John Braun said in a prepared statement. “In terms of Tyler’s coaching success, his teams’ accomplishments highlight his outstanding leadership skills in leading a high school football program.”

Krebs helped lead a turnaround at Burnsville, which amassed just seven victories and 30 losses combined in the four seasons before his arrival. Burnsville reached the section championship game in three consecutive seasons. In 2015 the team reached the state tournament. In its most recent two seasons, the team compiled a 16-5 record.

Krebs previously had been the defensive coordinator and assistant head coach at Eastview for 14 seasons.

He replaces Thompson, who retired after 38 years in Lakeville, including three state championships. Krebs played in the 1991 Prep Bowl under Thompson when he was a senior at Lakeville High School.

The release from Lakeville South said Krebs will be moving back to Lakeville with his wife Ali (also a Lakeville graduate) and their three children, Ava, Casey and Brady.

Krebs, in the statement, said he coaches “because of the experience I had as a player at Lakeville learning from Coach Thompson and his staff. I’m excited to build on the traditions of Lakeville South football, and our family is excited to become a part of the Lakeville school community once again.”