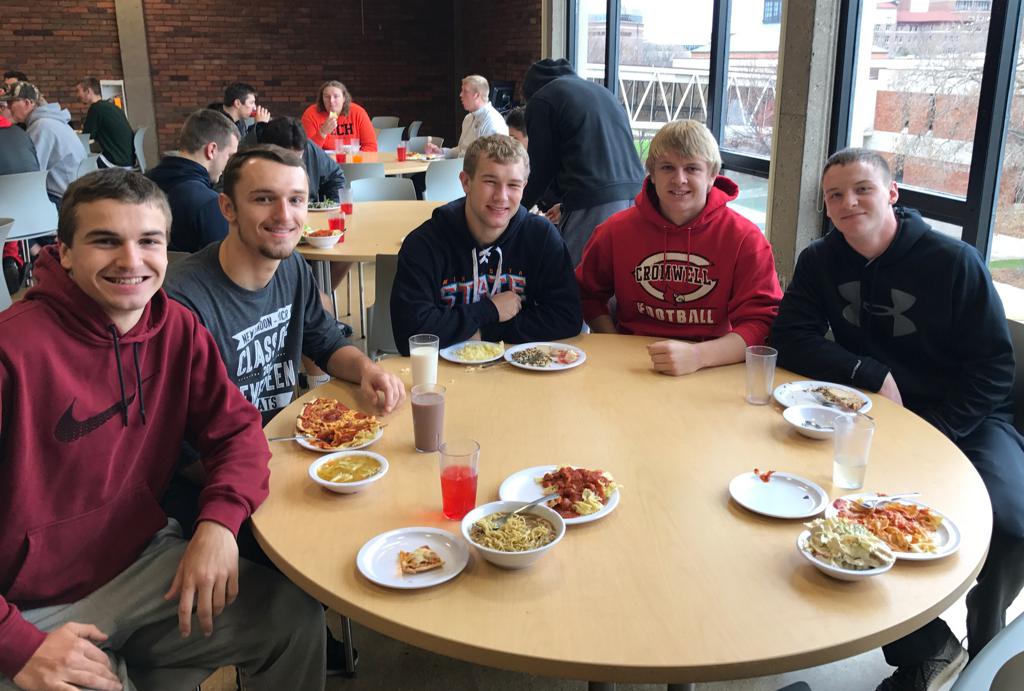 After grabbing a plate of food for lunch in between practices, DeLaSalle defensive back J.T. Baker walked with Carson Tunheim toward a group of tables to sit down.

“Detroit Lakes,” Baker asked Tunheim, “Where exactly is that?”

Questions like Baker’s are common among 94 teammates who are trying to get to know each other during training camp this week for the annual high school football All-Star Game, set for Saturday at U.S. Bank Stadium.

“The coaches have a rule of no cellphones on the bus, dinner or lunch, so that we can actually talk and bond,” Baker said. “That is crucial to this whole experience because we are meeting friends that we will have forever.”

For the players, divided between two rosters of North and South teams, it’s meant a three-day training camp that started Wednesday. Both teams are staying at the Double Tree by Hilton Hotel in Minneapolis and share breakfast and dinner together, with the coaches group and the Vikings picking up the tab.

Concordia (St. Paul) hosts the South team’s practices. The North team practices at Augsburg. Athletes were excused from school to take part in training camp but are expected to make up missed work.

Players practice twice a day, with lunch and position meetings sprinkled in. Evenings give them a chance to relax and get to know each other. They saw a movie together on Wednesday and spent the first half of the Vikings game watching it with patients at Children’s Hospital. Friday night is the All-Star Banquet.

“We are having fun together,” said Ryan Poehls of Dilworth-Glyndon-Felton. “I have never met these guys, so I am just meeting brand new people.”

When the game was held in June, many of the state’s top seniors had already enrolled in Division I colleges and didn’t play. But moving the game to the week after the Prep Bowl has resulted in what game director Dave Fritze calls the “biggest, fastest and best” group of all-stars in the game’s more than 50-year history.

Of 45 all-state selections between both teams, 21 will play on Saturday. In the game held last June, just six all-state first-team players participated.

“It helps,” Josh Heiman of Ely said. “There are going to be a lot of scouts at the game, so it gives you exposure.”

Baker, who already committed to Cornell, said the chance to play against his peers one last time was something he could not turn down.

“This is another week of high school football, which is always good,” Baker said. “It is cool to become friends with your opponents and some rivals you saw on Friday nights.”

The 3 p.m. game will be broadcast by Ch. 9. Jeff Ferguson of Totino-Grace is coaching the North and Mike Grant of Eden Prairie the South. Their teams played for the Class 6A title.

The showcase will feature youth football clinics, autograph sessions with former Vikings players and appearances by the Vikings cheerleaders and the Skol Line.