The Red Knights defeated Winona 31-28 in the Class 4A Prep Bowl, a game that had nine lead changes. 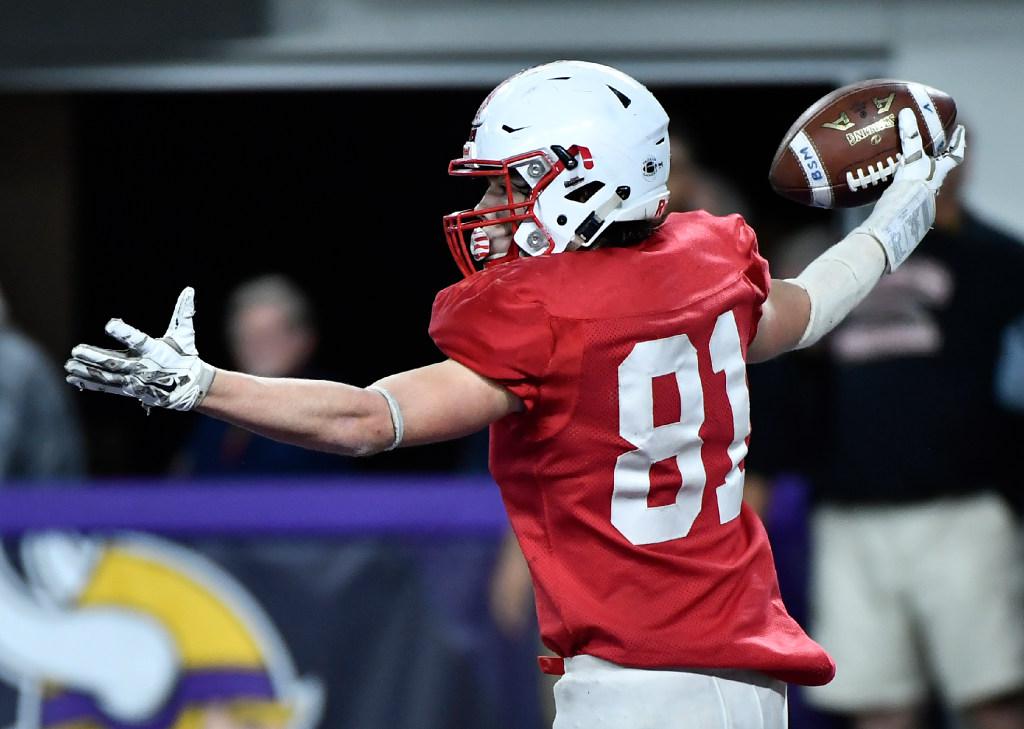 Benilde-St. Margaret's running back Liam Ford (81) celebrated his fourth-quarter touchdown, his second of the game, which provided the margin of victory against Winona on Friday. Photo: AARON LAVINSKY * aaron.lavinsky@startribune.com

Without Ricky Floyd, the conventional wisdom was that Benilde-St. Margaret’s couldn’t win. The game-breaking Floyd was the Red Knights’ X-factor, the player who made elevated them to championship level.

Clearly, conventional wisdom is not a class offered at Benilde-St. Margaret’s.

The Red Knights thumbed their collective noses at expectations, turning the early-game loss of Floyd to a shoulder injury into a rallying point and went on to defeat Winona 31-28 in the Class 4A final. It’s the first football state championship for Benilde-St. Margaret’s.

Backup running back Liam Ford rushed 18 times for 81 yards and two touchdowns, weaving 24 yards for the game-winner with 4:50 left in the game. Ford’s score capped a back-and-forth game that saw the lead change nine times.

“Right after the ball was snapped, you could just see a huge hole. Liam hit it so hard and broke a couple of tackles,” Benilde-St. Margaret’s quarterback Will Whitmore said. “I was absolutely going crazy.”

When Floyd left with a separation of his left shoulder after two carries in the first quarter, Benilde-St. Margaret’s was forced to regroup and diversify. The Red Knights leaned on Ford, Whitmore, Alex Houlihan and a hard-nosed defense.

“It takes about 10 minutes, because you’re feeling sorry for yourself and you wonder if you can do this,” Benilde co-coach Jon Hanks said. “But then they settled down, grabbed the reins and said ‘We can do this. Let’s go.’ ”

Whitmore led the charge in the first half, completing seven of 11 passes for 137 yards and a touchdown. He repeatedly rescued drives with his feet and his arm, keeping the Red Knights close. They trailed 21-17 at halftime.

“They changed a lot of things [when Floyd went out],” Winona coach John Cassellius acknowledged. “With him, they run the sweep 95 percent of the time. It’s hard to change when you prepare for one thing.”

The second half belonged to Ford. He did most of his damage after halftime, rushing for 63 yards and two scores, including the game-winner. Afterward. Ford, who saw most of his playing time on defense this season, said he was confident in his team, if not so much his ability to remember all the plays.

“I knew the plays. Most of them. Some of them. I screwed up on a couple of them,” said Ford, who sealed the victory in the final minute with his team’s fourth interception of the game. “But it was all the guys that came together and rallied. We all won this together.” 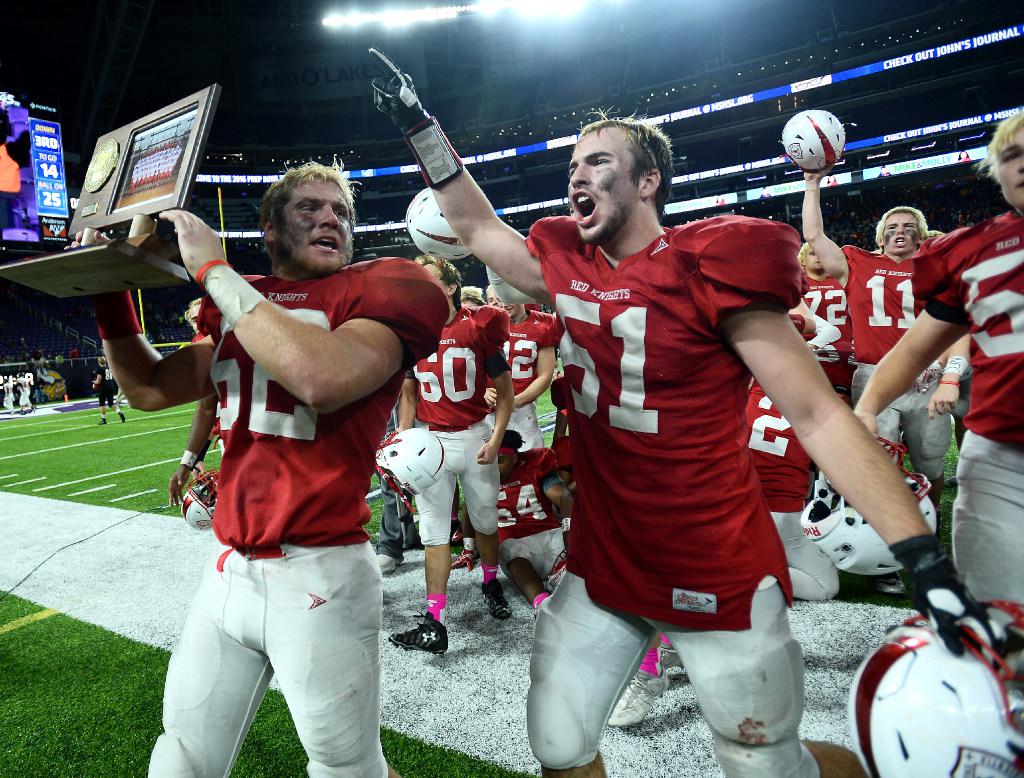 The Red Knights lost their star running back to a shoulder injury on his second carry of the game, but pieced together enough offense to slip past Winona 31-28 in the Class 4A championship game.

Ford scored the go-ahead touchdown in the fourth quarter on a 24-yard run – the ninth lead change of the game – and then sealed the victory with an interception to end Winona’s final threat. 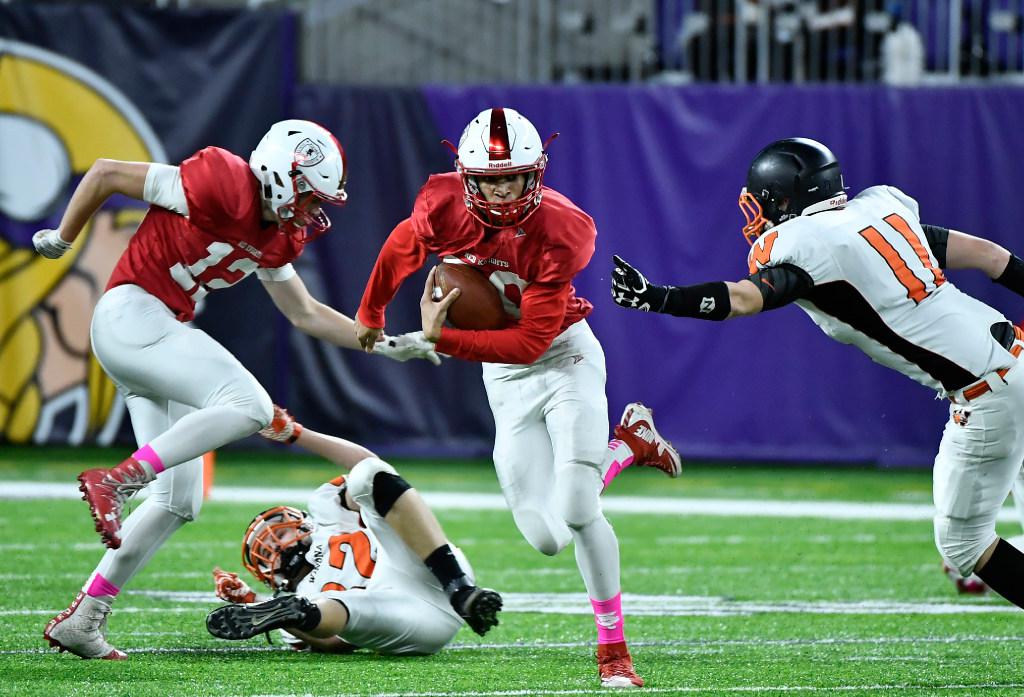