The Eagles scored three fourth-quarter touchdowns en route to a 28-20 victory to win the Class 6A championship. 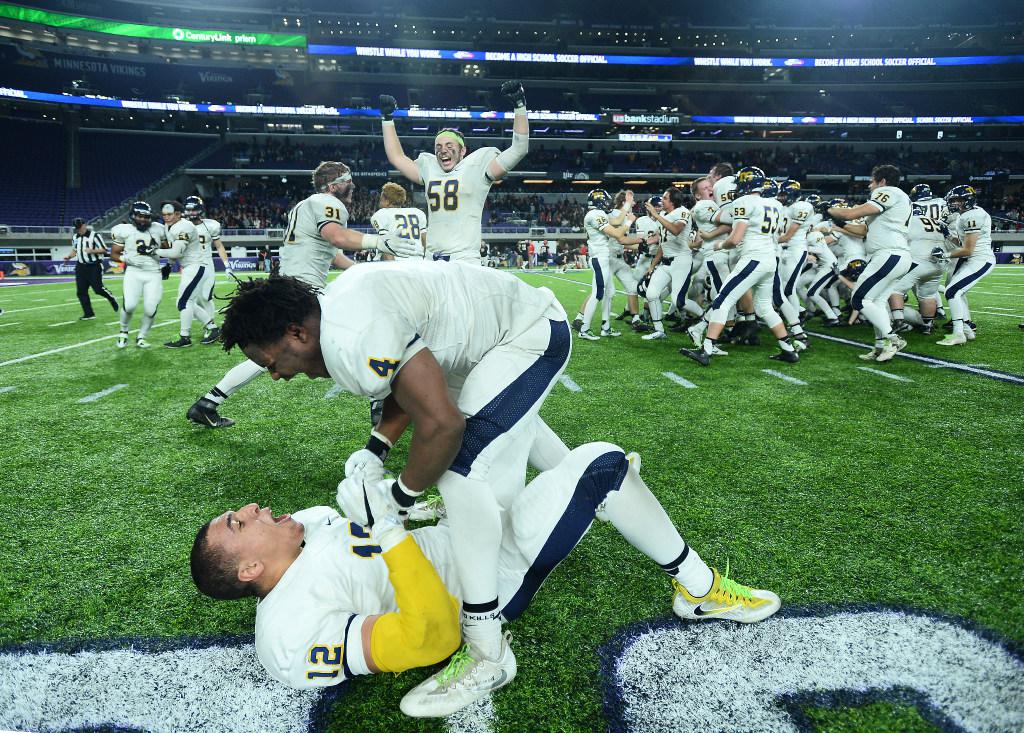 Totino Grace linebacker Jared Florell (12) and running back Gayflor Flomo (4) celebrated in the foregroun as their team erupted after winning the Class 6A championship on Friday. Photo: AARON LAVINSKY * aaron.lavinsky@startribune.com

For two programs so similar, Totino-Grace and Eden Prairie played contrasting and unusual roles in the Class 6A Prep Bowl.

Totino-Grace, a Class 4A private school located in Fridley with an enrollment of fewer than 800 students, began opting up in 2011 and lost three consecutive playoff showdowns against Eden Prairie — home to more than 2,700 students — including a 28-27 loss in the Prep Bowl two years ago.

Familiarity bred a formula for success, however.

“So many teams that play Eden Prairie look at their past and how good they are and then they put themselves in a mind-set that doesn’t allow them to win,” senior linebacker Charlie Waters said. “You’ve got to come out and know you can outphysical Eden Prairie.”

A muffed punt extended a Totino-Grace (13-0) possession and Kyle Halverson hit Rocky Kreuser on fourth down to tie the score 14-14.

“Coach came up to us and said, ‘It’s the Prep Bowl, we’re going for it,’ ” said Halverson, who called the touchdown “a big momentum swing.”

Totino-Grace stayed aggressive on its next trip deep inside Eden Prairie territory. Halverson’s hard count on fourth down drew the defense offside, and Gayflor Flomo later scored for a 21-14 lead.

“They’re aggressive and they will pound you down,” Eden Prairie linebacker Antonio Montero said. “Little plays like that really tear you down as a defense.”

Eden Prairie (11-2) fumbled on its next possession, and Totino-Grace answered with its third touchdown of the fourth quarter, this one from Ivan Burlak.

“We’re both trying to play the same game, they just got the edge on us this time because you can’t turn the ball over against them,” said Eden Prairie coach Mike Grant, who added that his team’s two fumbles ran its season total to eight.

“I don’t know of another team in the state that has opted up two classes in any sport,” Ferguson said. “I know I say that a lot, but I’m very proud of that.”

“They’re all awesome, but this is different, yeah,” Ferguson said. “It’s a pretty big deal to us, anyway.” 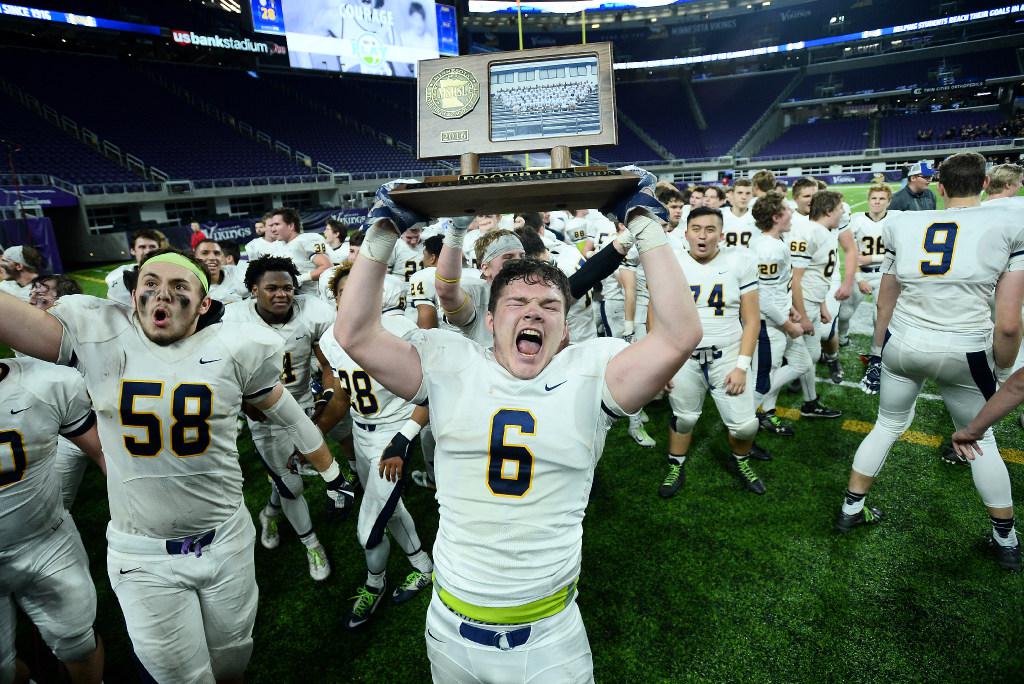 The Fridley-based private school took down Eden Prairie 28-20 in the Class 6A Prep Bowl on Friday at U.S. Bank Stadium.

Top-ranked Totino-Grace trailed 14-7 before outscoring Eden Prairie 21-6 in the fourth quarter. Running back Gayflor Flomo scored the go-ahead touchdown. Ivan Burlak put his team ahead 28-14 with 1:30 to play.

Totino-Grace (13-0) won the next two games in this budding rivalry, ending Eden Prairie’s season in the playoffs last year and opening this season with a victory.

Eden Prairie (11-2) lost in the Prep Bowl for just the second time in 12 appearances.

Eden Prairie opened the scoring on an 86-yard punt return for a score by Kyle Connelly at 7:45 of the first quarter. Connelly fielded the ball near the Totino-Grace sideline and took off, then cut back on a diagonal route to the end zone. The extra point gave Eden Prairie a 7-0 lead.

Another special teams miscue almost brought disaster for Totino-Grace. The snap to punter Kyle Halverson sailed over his head. But he chased the ball down and got the punt away. Then Halverson fumbled the snap on his team’s next drive but recovered.

Eliminating mistakes helped Totino-Grace draw even in the second quarter. First, the defense turned Eden Prairie over on downs at the Totino-Grace 45-yard line and gave the team an emotional lift.

Then runs from Flomo bookended Totino-Grace’s scoring drive. A 17-yard dash put the offense into Eden Prairie territory. Flomo finished the drive with a 5-yard run with 11 seconds to play before halftime. Totino-Grace started the drive 0-for-4 on third down but converted twice.

Both teams scratched for yards in the first half, averaging four yards per play. Totino-Grace out-gained Eden Prairie 141 yards to 80 and held a 4:12 advantage in time of possession.

The edge seemed to tire the Eden Prairie defense, which allowed a 30-yard Ivan Burlak run early in the third quarter. But the defense stiffened, turning Totino-Grace over on down at the Eden Prairie 26-yard line.

The Eden Prairie defense struck again with a Devionne Young sack for a 16-yard loss and forced a punt from deeper in Totino-Grace territory. As a result, the Eden Prairie offense went to work from its 49.

Two big Cole Kramer throws made the difference. He hit Daejon Wolfe for 19 yards to the Totino-Grace 28-yard line. On the next play, Kramer led Connelly with a pass and the receiver dived to catch the ball in the end zone. Connelly’s second score gave Eden Prairie a 14-7 lead with 5:42 to go in the third quarter.

Totino-Grace, after recovering a Eden Prairie fumble on a punt, faced 4th and 2 at the Eden Prairie 4-yard line. Tight end Rocky Kreuser got free down the middle and caught the scoring pass to tie the game 14-14 with 11:56 to play.

Totino-Grace defeated Eden Prairie 17-14 to open this season and both coaches went away anticipating a playoff rematch.

Since 2013, Eden Prairie is 4-2 against Totino-Grace and 42-0 against everyone else. Totino-Grace went 39-4 against the field and has won the past two games in the budding rivalry. 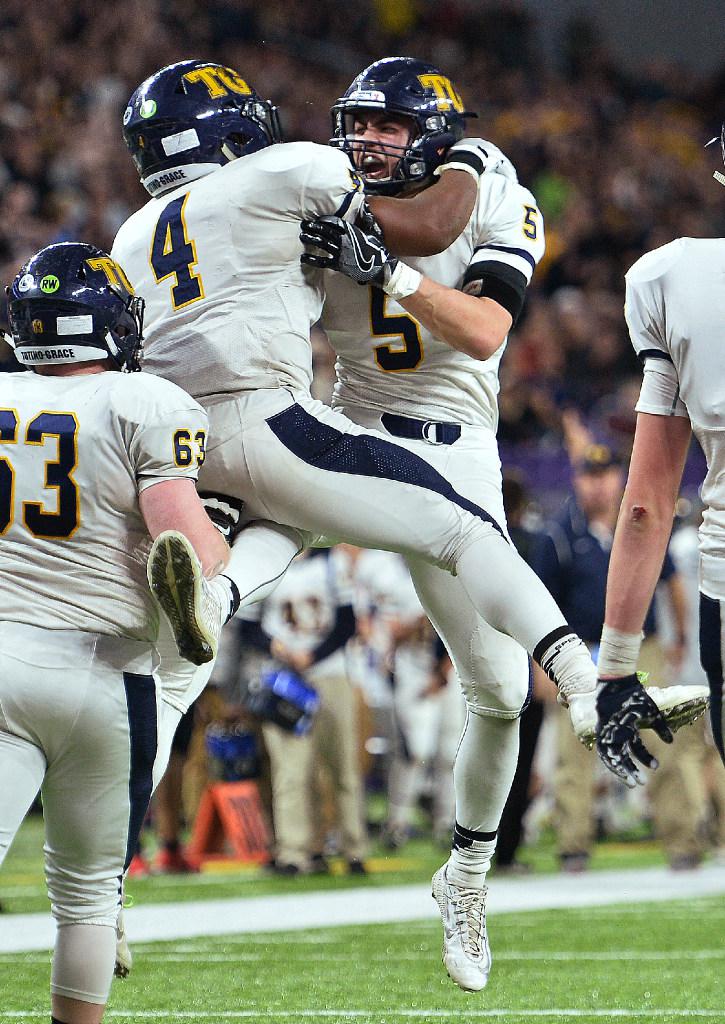