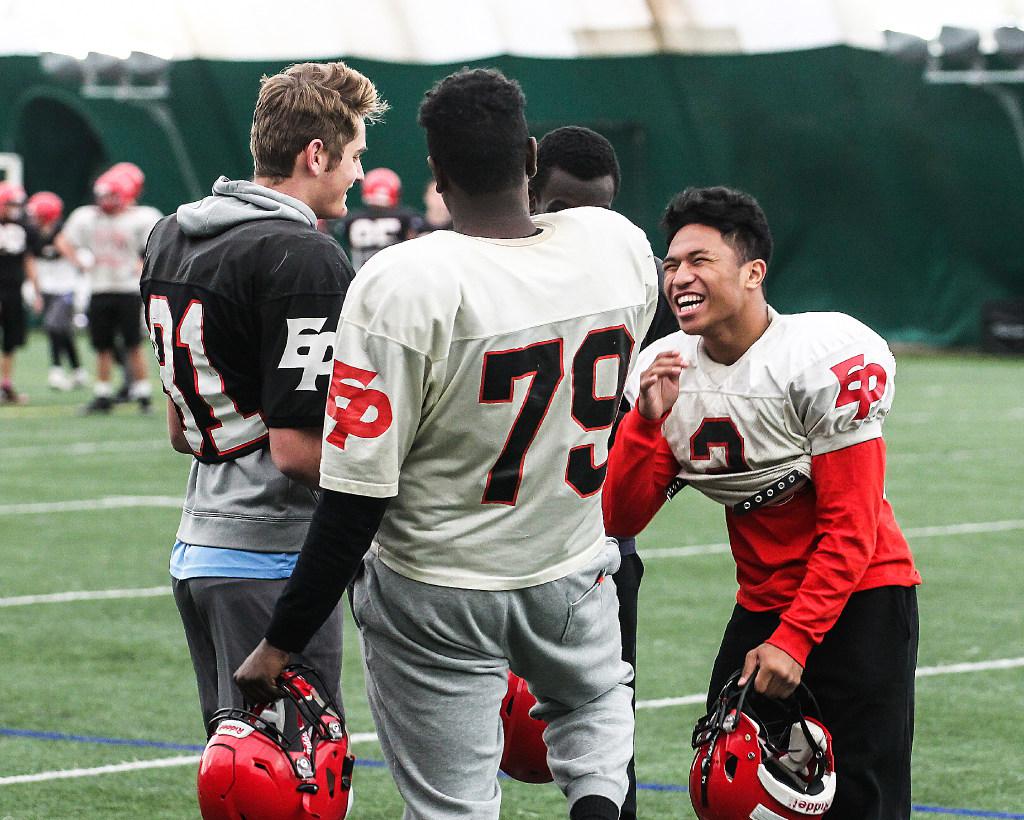 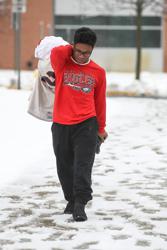 There aren’t any palm trees or gentle trade winds or lilting strains of ukulele music in Eden Prairie. This is not where Solo Falaniko expected to be.

When the Eden Prairie junior found out last year that his Army supply sergeant father was seeking an assignment other than Anchorage, Alaska, where the Falaniko family had lived for three years, the hope was they would be headed back to Hawaii.

“We lived there for a while and my oldest brother [Ezekiel] lives there now. He’s in the military and he’s stationed there. I thought that’s where we were going, to be by him and his family,” said Falaniko. “I wasn’t too happy about it at first when I found out we were coming to Minnesota.”

Falaniko may have been disappointed, but coach Mike Grant and the members of the Eden Prairie football team have been absolutely thrilled with his arrival. And the 5-foot-6, 175-pound running back, whose slingshot acceleration and catalogue of ankle-wobbling cuts have made him the Eagles’ most potent weapon, has found that his new home is a far more enjoyable place than he thought it would be.

“I was surprised,” he admitted. “I didn’t expect the football to be so good. When I first walked on to the field, I didn’t know if I could fit in.”

With six boys in the family, football is an integral part of the Falaniko way of life. Eti, the second-oldest son, is a defensive lineman at Mayville State in North Dakota. Ethan, who last year earned the Gatorade Alaska Player of the Year award at Bartlett High School in Anchorage, is now a freshman running back at the University of South Dakota.

“Either Nebraska or Minnesota,” Solo said. “We chose Minnesota because of the distance between North Dakota and South Dakota.”

Grant said the arrival of Falaniko in August came as a complete surprise.

“I was just sitting in my office and he walked in and said he wanted to play football,” Grant said. “I had no idea who he was.”

It didn’t take him long to find out. When Falaniko showed off his speed and agility, Grant’s keen eye saw someone who could make an impact on the team.

“Some people say I can’t coach, but I saw right away he was a pretty good football player,” Grant said. It took Falaniko’s teammates a little longer to figure out the sum was greater than the parts.

“When he first got here, I saw that he was fast, but he’s pretty short and I didn’t know anything about him,” said senior defensive back/receiver Kyle Connelly. “I thought ‘Well, he’ll probably be a good JV player.’ ”

J.J. Drew, the Eagles’ 6-foot-6 offensive tackle, had some of the same skepticism.

“At first, I thought ‘I don’t know about this,’ ” Drew admitted. “But then he went out made these insane runs and crazy cuts and I thought, ‘I think we’ve got something here.’ ”

‘It helps to be a football player’

Despite having very few practices with the team before the season, Falaniko showed a learning curve that closely resembled his electrifying runs. He announced his presence in the second game of the season, rushing for 135 yards and two touchdowns in a 21-9 victory over Edina.

“I think that was the game I started to feel comfortable,” said the easy-going Falaniko. “I didn’t have a very good first game and I didn’t want to let the rest of the team down.”

Falaniko’s humility is his second-most disarming feature, behind his broad smile through squinty eyes that is unmistakable genuine. Like many military brats (a misnomer in Falaniko’s case), he’s moved around the United States as the assignments of his father have changed. Born in Vancouver, Wash., he and his family called Oregon, Hawaii, Texas and Alaska home before moving to Minnesota.

His journeys have taught him that being humble is the best way to make friends. That, and being an athlete.

“I’ve had to make friends in a lot of places,” he said. “It helps to be a football player. You get to know a lot of people that way.”

His skills haven’t hurt. Falaniko has improved as the season has gone on. He’s rushed for more than 1,300 yards and he’s peaking right now, posting back-to-back 200-yard games in the Eagles’ most recent victories over Maple Grove (63-21) and Champlin Park (23-0).

And his size, once the first thing his teammates noticed, has become a non-factor.

“I remember when we were playing Minnetonka,” Connelly said. “He just trucked some linebacker on the sideline, and that guy was, like, 230 pounds. And here’s this little guy running him over.”

That part is out of necessity, Falaniko said. Football in Minnesota is a different animal than it is in Alaska.

“Here, it’s much tougher, much faster,” he said. “Everyone runs to the ball. You’ve got to be ready.”

Looking back at everything he’s done in the short time he’s been here, Falaniko just shakes his head.

“I can’t believe how lucky I’ve been,” he said. “We have a great team. And getting to play in U.S. Bank Stadium is, wow.”

And his feelings about coming to Minnesota?

“Hawaii is nice, but I’m glad we came here.” 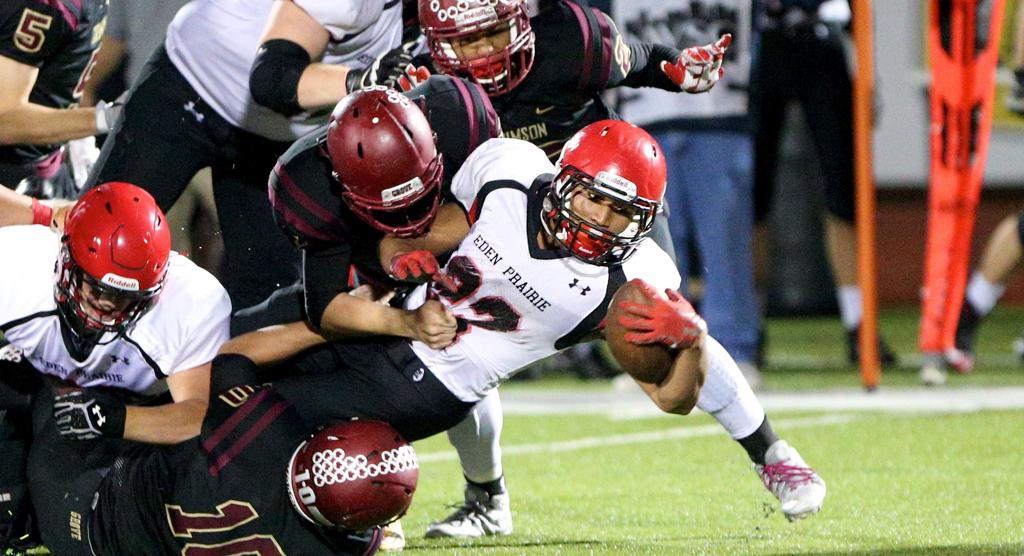 Eden Prairie junior running back Solo Falaniko stretches for extra yardage in the Eagles' 28-15 victory over Maple Grove on Friday.