1A: Fast, physical defense leads Minneapolis North back to the Prep Bowl

The Polars defeated Wabasso 16-8, holding their opponent to less than 200 yards of total offense. 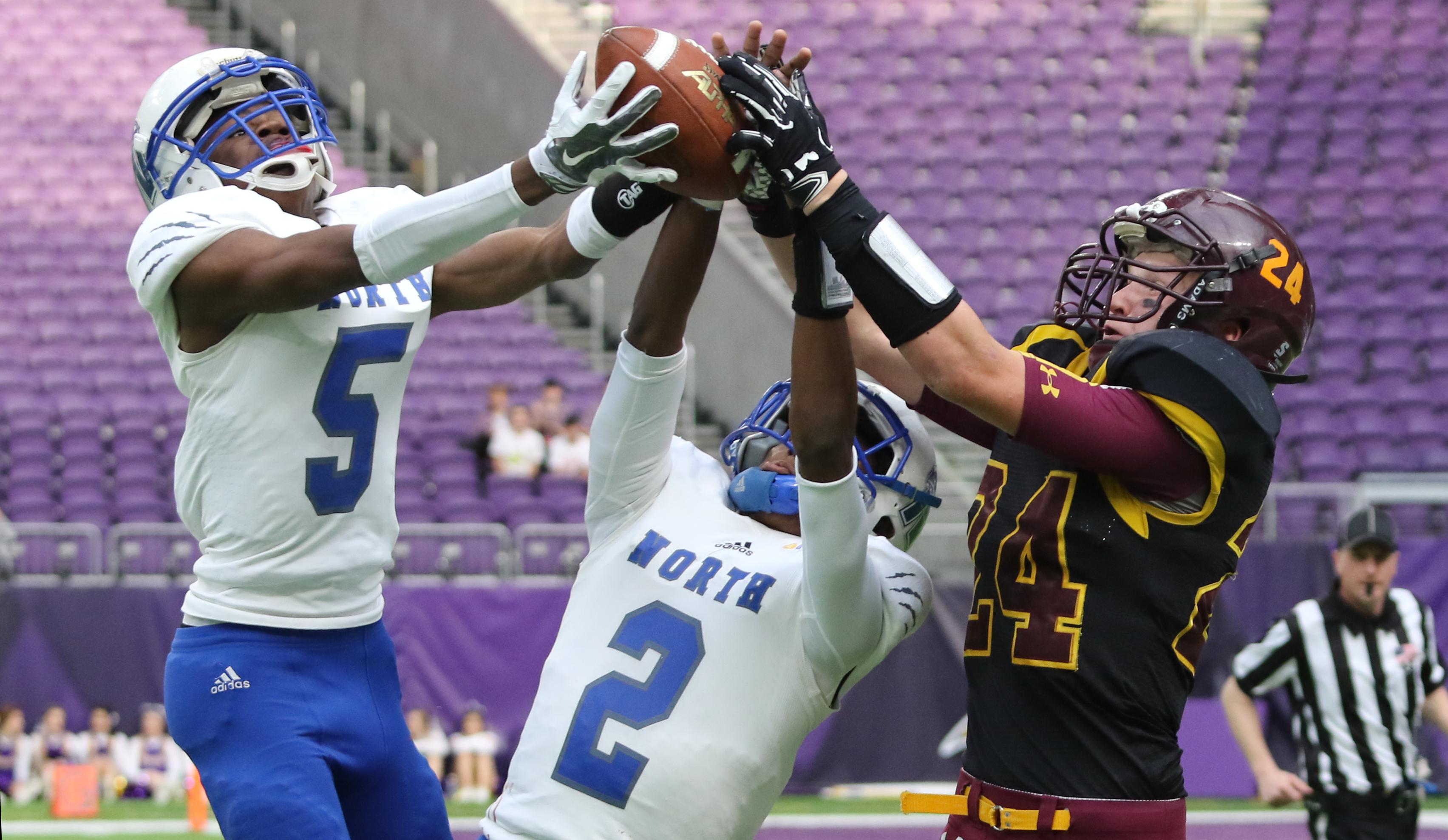 Minneapolis North's Taylor Johnson (5) intercepted a pass with 46 seconds left in the game to stop a Wabasso drive and help the Polars secure a 16-8 victory, advancing to the Prep Bowl next week. Photo by Cheryl Myers

The quickness and athleticism of Minneapolis North is no secret. Wabasso coach Joe Kemp knew what North’s strengths were and thought the Rabbits had an answer.

But seeing it on video and experiencing it in person are different things altogether.

North’s defense made the Rabbits look lethargic and carried the Polars to a 16-8 victory over Wabasso in the Class 1A semifinals. North (12-0) will play in the Prep Bowl for the second consecutive year.

“Their defensive line was more physical than we had seen on film,” Kemp said. “We didn’t look like it today, but we are an extremely fast team. But North was at a whole ‘nother level today.”

The defense, with Nate Wheeler, Odell Wilson and Phil Scott controlling the line of scrimmage and linebacker Jamire Jackson cleaning up behind them, allowed Wabasso just 193 yards of total offense.

“People criticize us for playing in [Class] 1A, but you have to understand, 1A is physical, tough football with some big boys,” North coach Charles Adams said. “We have to be physical and tough on the front line to be able to compete with anybody in 1A.”

The Polars moved the ball with few problems offensively but mistakes hurt them when they neared the goal line. Isaac Johnson caught a six-yard slant for a touchdown in the first half and Jamin Smith squirted through a hole for a 12-yard score in the second half.

Quarterback Zeke Rodgers had three passes picked off in Wabasso territory, but the Polars defense made sure those miscues caused little harm.

“Sometimes you have those days,” Rodgers said. “I’m glad we got those out of the way in this game instead of the championship game.”

North running back Kehyan Porter rushed for 118 yards and Smith added 79 for North, which rolled up 378 total yards.

Despite North’s statistical dominance, Wabasso got the ball the back with 1:31 left and threatened to tie the game. The Rabbits reached the North 44 before Nick Altermatt’s pass was picked off by Taylor Johnson at the North 11 to end the threat.

“There was nothing technical about it,” Adams said of his late game instructions. “I just said ‘It’s four plays, fellas. Don’t let them score. Keep them from scoring and we got the game.’ ” 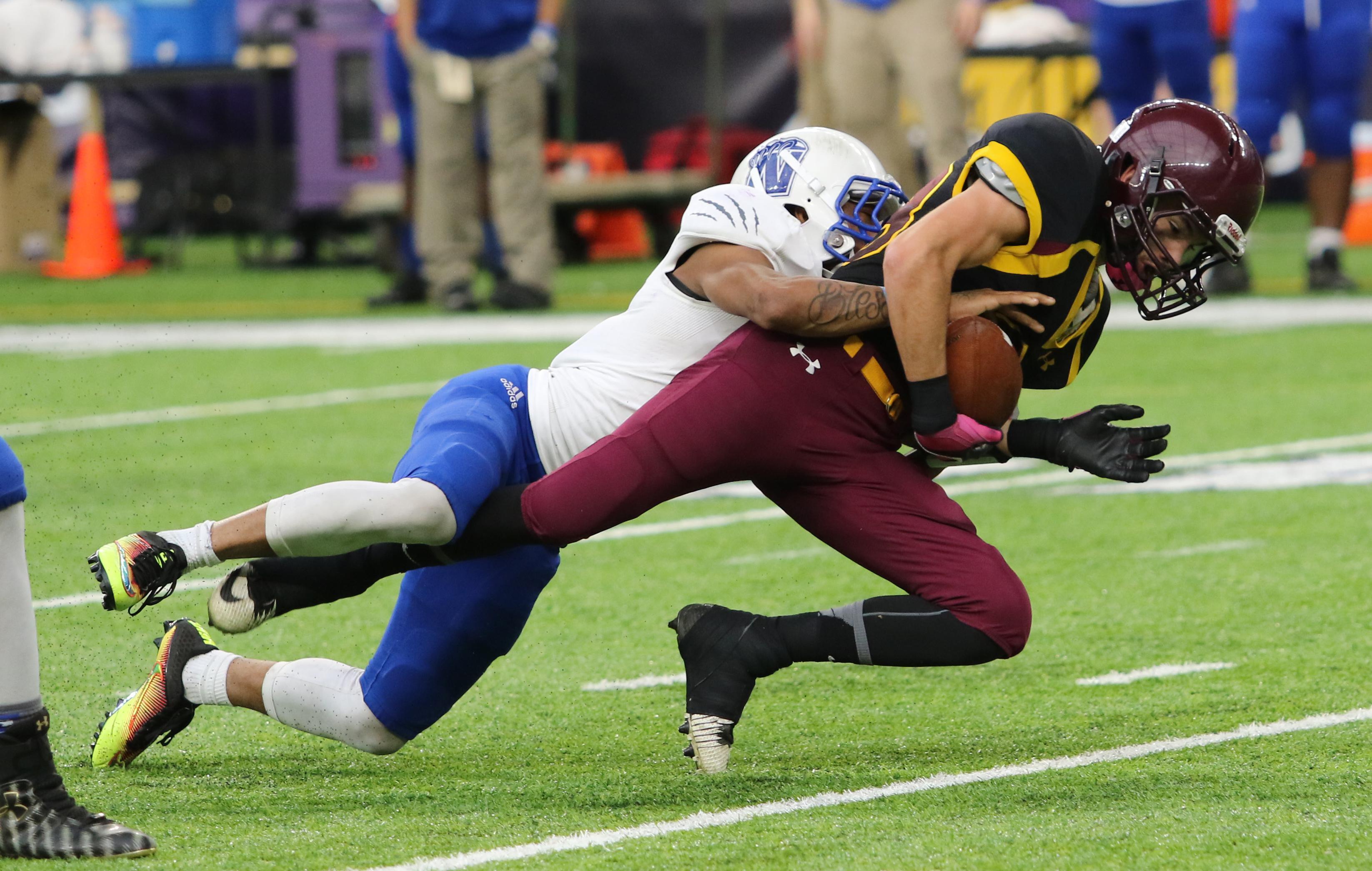 Wabasso's Cooper Taylor dives for extra yards in the Rabbits final drive of the game. Photo by Cheryl Myers.

Minneapolis North’s defense proved good enough to overcome offensive mistakes, myriad bewildering calls and a tough opponent as the Polars defeated Wabasso 16-8 to advance to the Class 1A championship game for the second consecutive year.

Isaac Johnson caught a six-yard scoring pass from Azerick Rodgers in the first half and Jamin Smith scored on a 12-yard run in the second half for North.

The Polars survived three interceptions, all deep in Wabasso territory, and were called for 11 penalties for 89 yards, including some head-scratchers late in the game while trying to protect their lead.

Wabasso was held to just 193 yards of total offense in the game.