The Elks and Cardinals scored 96 points combined, but Elk River came out on top, winning 60-36. 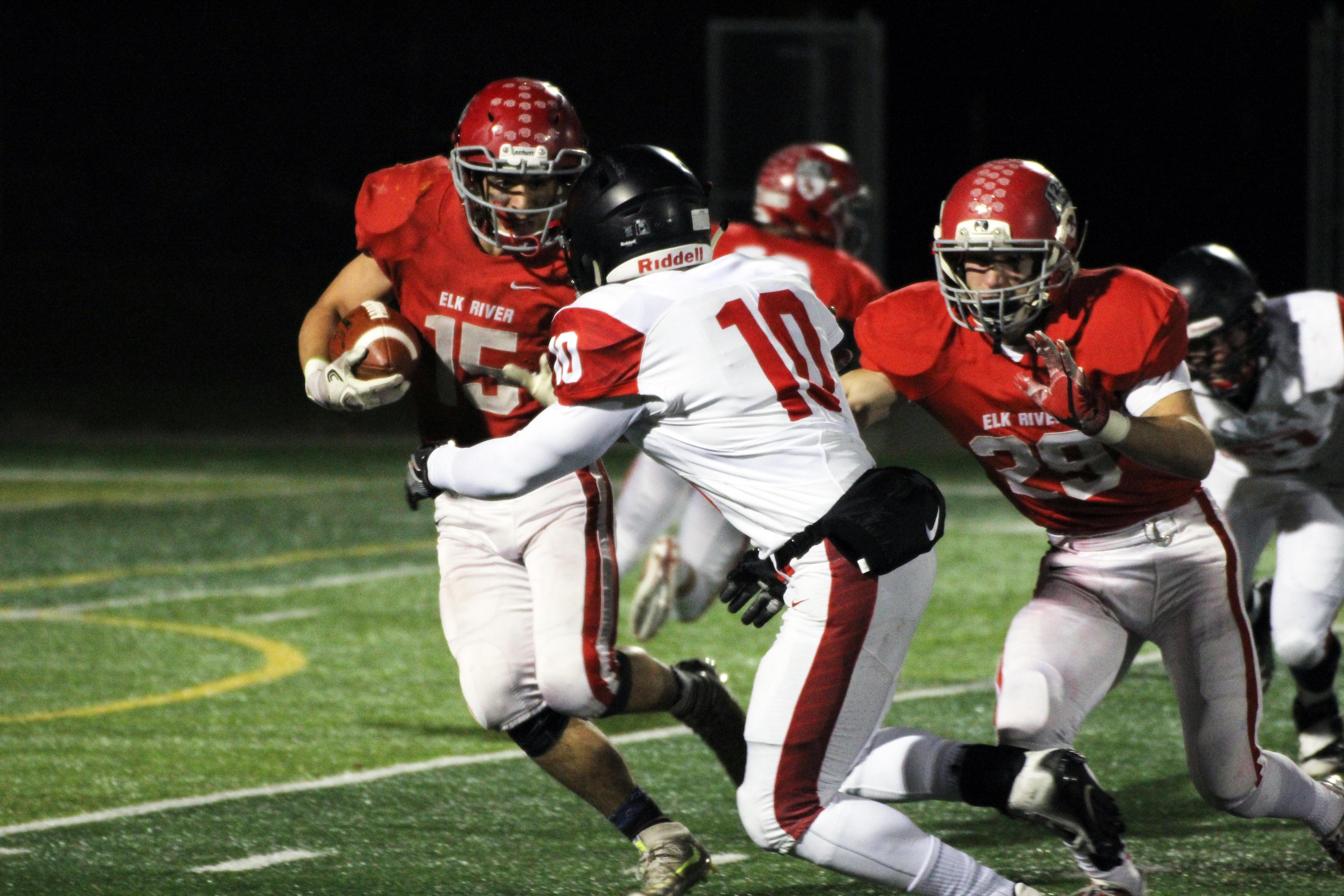 Sam Gibas (15) and Nick Rice (29) combined for four of the Elks' touchdowns in Saturday's 60-36 victory over Alexandria in the Class 5A quarterfinals at SCSU Husky Stadium. Photo by Trevor Squire, SportsEngine 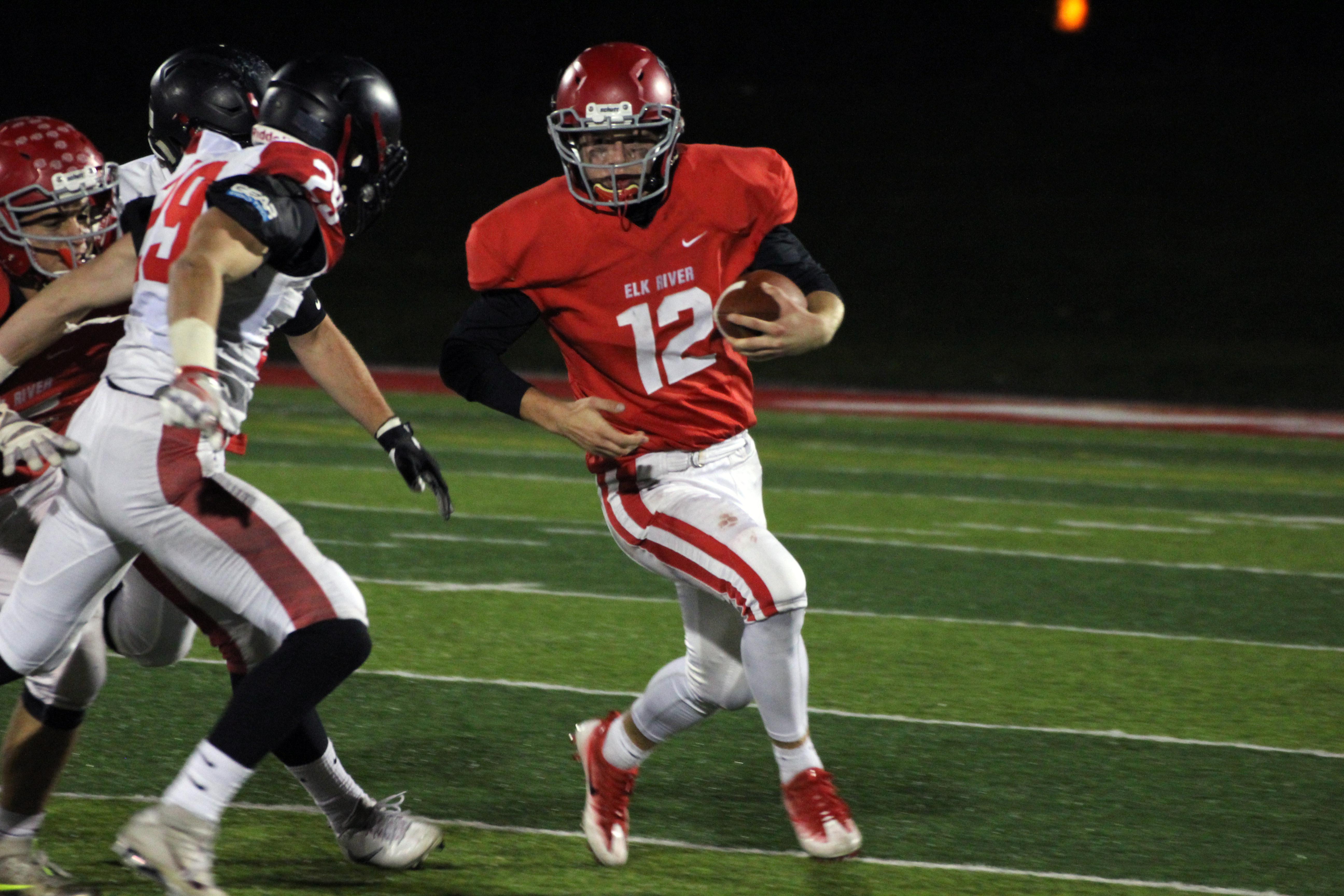 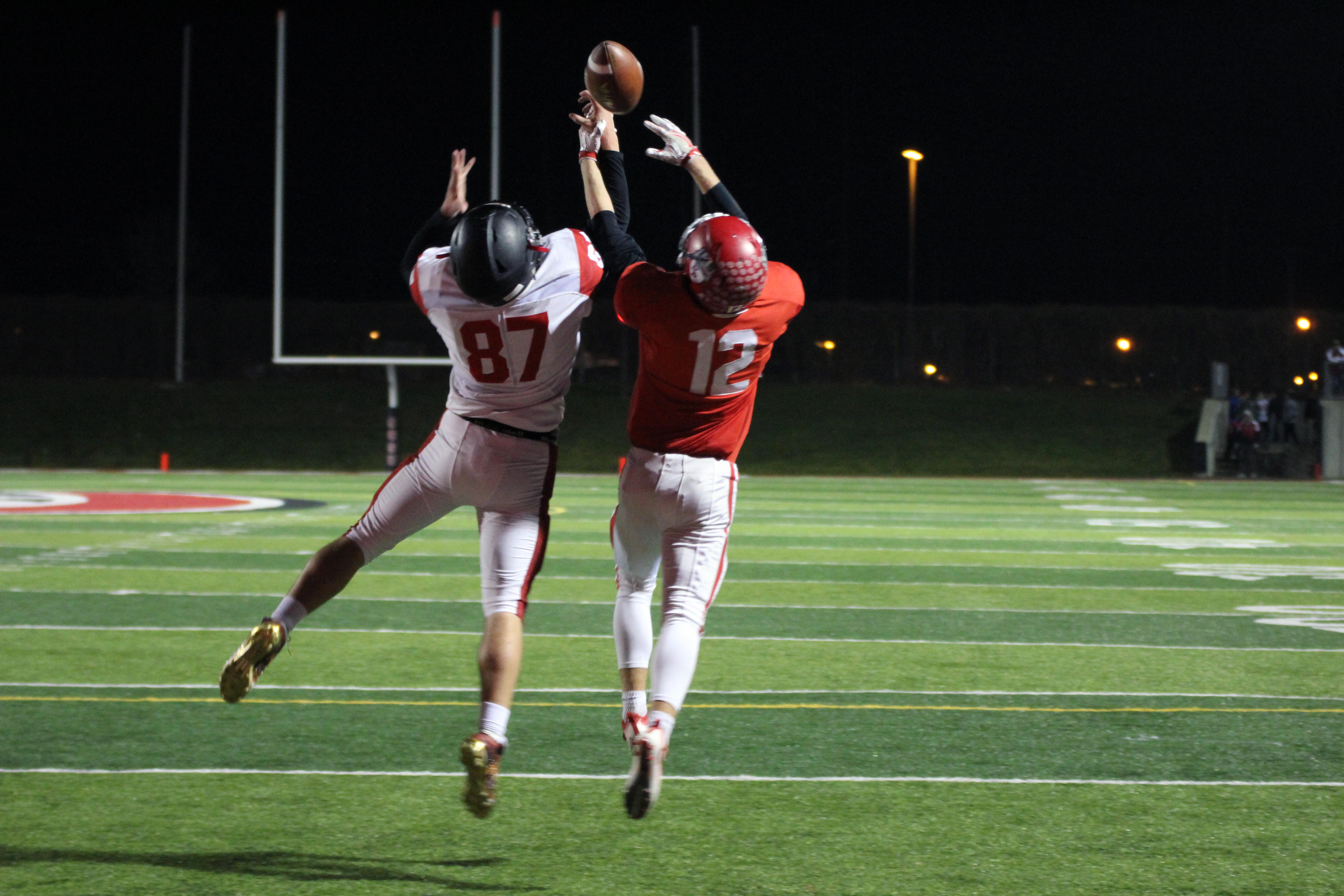 Blake Hills (12) and Cardinals tight end Bryce Ludwig (87) go up for the ball in the fourth quarter. Photo by Trevor Squire, SportsEngine

It’s safe to say that Elk River has no intention of adding any wrinkles to it’s already multi-layered, run-oriented offense.

Especially not after hanging 60 points on Alexandria, a team ranked No. 8 in the final Class 5A state coaches’ poll.

“We’re not going to change anything at all,” senior running back Nick Rice said after his Elks (11-0) trounced the Cardinals 60-36 in the quarterfinals of the state tournament at St. Cloud State’s Husky Stadium Saturday night.

“Putting up sixty, you don’t really need to change anything, you know,” Rice added.

The Cardinals (9-2) certainly know that now.

Rice jetted for over 275 yards and three touchdowns in the win, including a TD scamper for 58 yards in the first quarter.

Senior quarterback Blake Hills contributed his share of damage on the ground too, running for three TDs of his own.

Despite the gaudy stat line, Hills shook off any pretense that his job bears a degree of difficulty.

“My job is just to hand off the ball,” Hills said with a laugh. “It’s the guys, these guys who do the hard work in there,” Hills added, gesturing to Rice.

After surrendering 39 points in the first half, the Cardinals faced a 31-point deficit, proving to be too much to come back from.

The Elks took a 46-8 lead early in the third quarter, but Alexandria’s coaching staff set Cardinal senior quarterback Jaran Roste loose in the fourth frame, as he ran for one TD and threw for another, helping the Cardinals claw their way back into the game with some flashy play calling.

“The guys had fun with them, and with the score shaping up the way it was, it was pretty clear,” Alexandria coach Mike Empting said of his team’s use of trick plays and a hurry-up offense in the game’s final minutes.

“We might as well let the guys have some fun here at the end,” Empting added.

For the Elks, the fun had been brewing since the team’s group of seniors were in the seventh grade, which is the year they began learning the ins and outs of the intricate and borderline archaic Wing-T offensive formation.

“We’ve been running this for six years, so everybody has a really good idea of what we’re doing,” Hills said.

Elk River coach Steve Hamilton bestowed upon his group of varsity veterans a lofty compliment, adding that he’s known his seasoned players could be exceptional nearly five years before this season started.

“This is a special group, ever since they won that championship in eighth grade,” Hamilton said. “This is the best group of seniors I’ve ever had. They just love the game and love each other.”

Senior running back Nick Rice ran for over 275 yards and three touchdowns, and senior quarterback Blake Hills ran for three TDs of his own as Elk River (11-0) rolled to a 60-36 victory over Alexandria in the quarterfinals of the Class 5A state tournament Saturday night at Husky Stadium on the campus of St. Cloud State University.

In addition to his offensive output, Hills had an equally impactful night on the defensive side of the ball, finishing with a pair of interceptions with Alexandria in the Elks’ red zone.

The Cardinals (9-2) made a valiant comeback attempt in the fourth quarter, scoring 22 points thanks to senior quarterback Jaran Roste, who ran for a 13-yard TD and threw a 28-yard TD pass to junior tight end Bryce Ludwig.

The Elks, ranked No. 1 in the latest Class 5A state coaches’ poll, will face Owatonna in the semifinals on Friday, Nov. 18 at U.S. Bank Stadium.