Zach Ojile scored on an 8-yard touchdown run for a 19-13 victory that keeps the Panthers undefeated at 7-0. 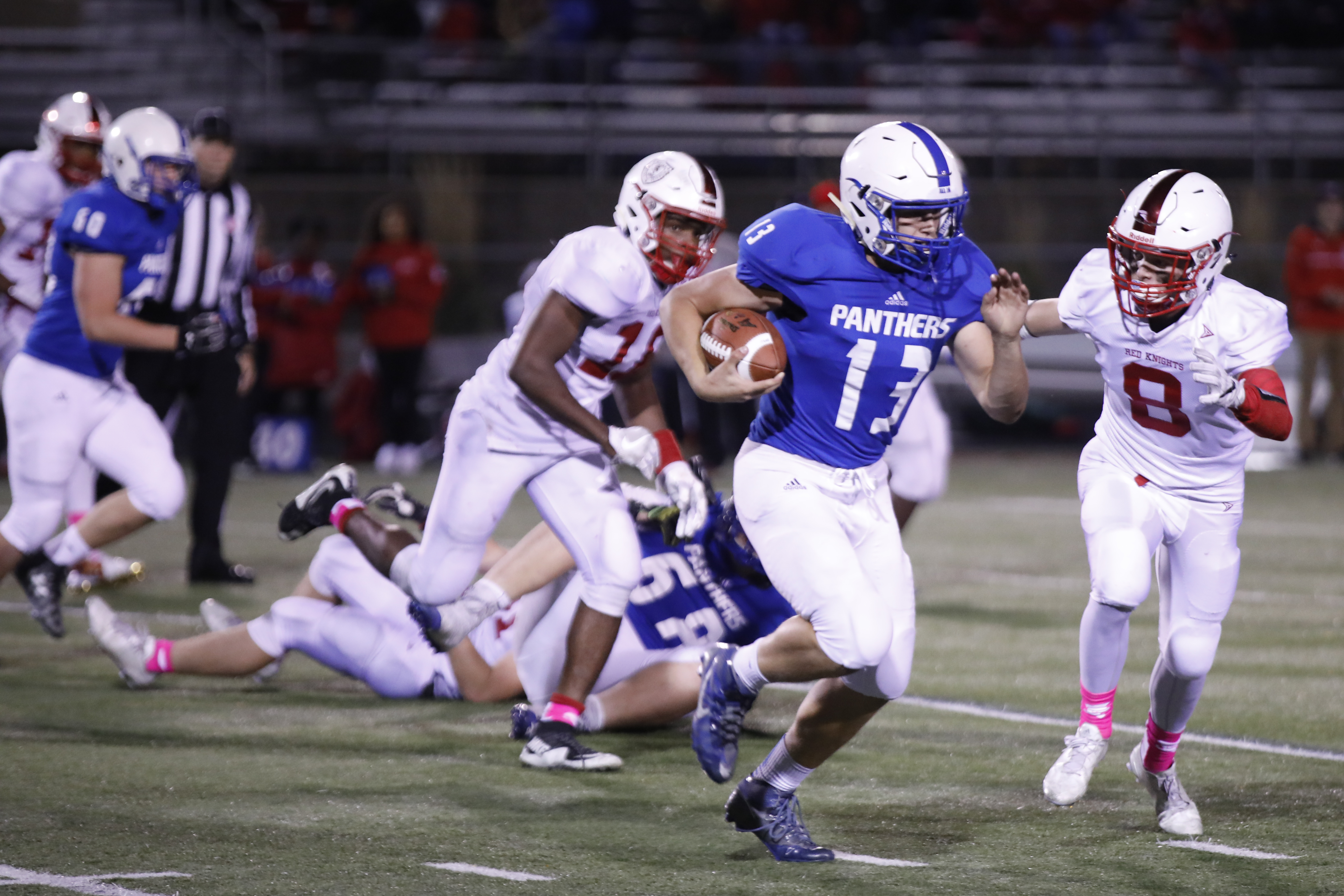 Zachary Ojile (13), QB for Spring Lake Park decided to run the ball while Clyde Sellke (8) of Bernilde tries to tackle him. Zachary scored the final touchdown in overtime to help his team win a 19-13 victory at home. Photo by Chris Juhn

With its undefeated season on the line, Spring Lake Park needed someone to make a big play.

The Panthers senior quarterback scored from 8 yards in overtime to lift Spring Lake Park to a 19-13 victory Friday over visiting Benilde-St. Margaret’s, giving the Panthers a 7-0 record as they head into their regular-season finale.

Ojile’s winning run was set up by a missed field goal by the Red Knights (5-2), who began overtime with the ball. Two plays later, the Panthers’ leading rusher was in the end zone.

“It was probably our most called play, just a dive and read the end man on the line of scrimmage,” Ojile said. “He closed on the dive, and I just pulled it.”

Benilde-St. Margaret’s star running back Ricky Floyd, held in check in the first half, broke free for two second-half touchdowns. The first was an 80-yard sprint on his first carry of the third quarter. He also beat the defense for a 25-yard score with 5:01 left in the fourth to tie the score 13-13.

Panthers running back Drew Swenson scored two first-quarter touchdowns but left the game in the second quarter because of a knee injury. He did not return, but his teammates stepped up in his absence.

“Next man up,” Ojile said. “We’ve just got to keep going and keep fighting.”

Quarterback Zach Ojile ran eight yards for a touchdown to lift the Panthers to a 19-13 win over Benilde-St. Margaret’s. The Panthers are now 7-0 on the season.

Panthers senior running back Drew Swenson provided an early spark with a 40-yard touchdown run on Spring Lake Park’s first play from scrimmage. Swenson broke through the Red Knights' defense to put the Panthers up 7-0 early in the first quarter.

Swenson scored again, this time on a 1-yard plunge to give Spring Lake Park a 13-0 lead after a missed extra point.

On the first play of the second quarter, Swenson suffered a leg injury that left him on the ground for several minutes. The senior was helped off the field by two teammates and did not put any weight on either leg. Swenson did not return to the game and watched the rest of it from the bench, receiving support and encouragement from his teammates after the injury.

Spring Lake Park’s defense held its own in the first half against Benilde star Ricky Floyd, one of the top running backs in the state. Floyd was stopped multiple times for a loss in the first half, with his longest run before halftime going for just seven yards.

But on his first carry of the second half, Floyd broke free. He sprinted 80 yards down the right sideline to put the Red Knights on the board, making it a 13-7 game early in the third quarter.

With 5:01 to play in the fourth quarter, Floyd scampered into the end zone from 25 yards out, which tied the game at 13. A missed extra point kept it a 13-13 score through the end of regulation. 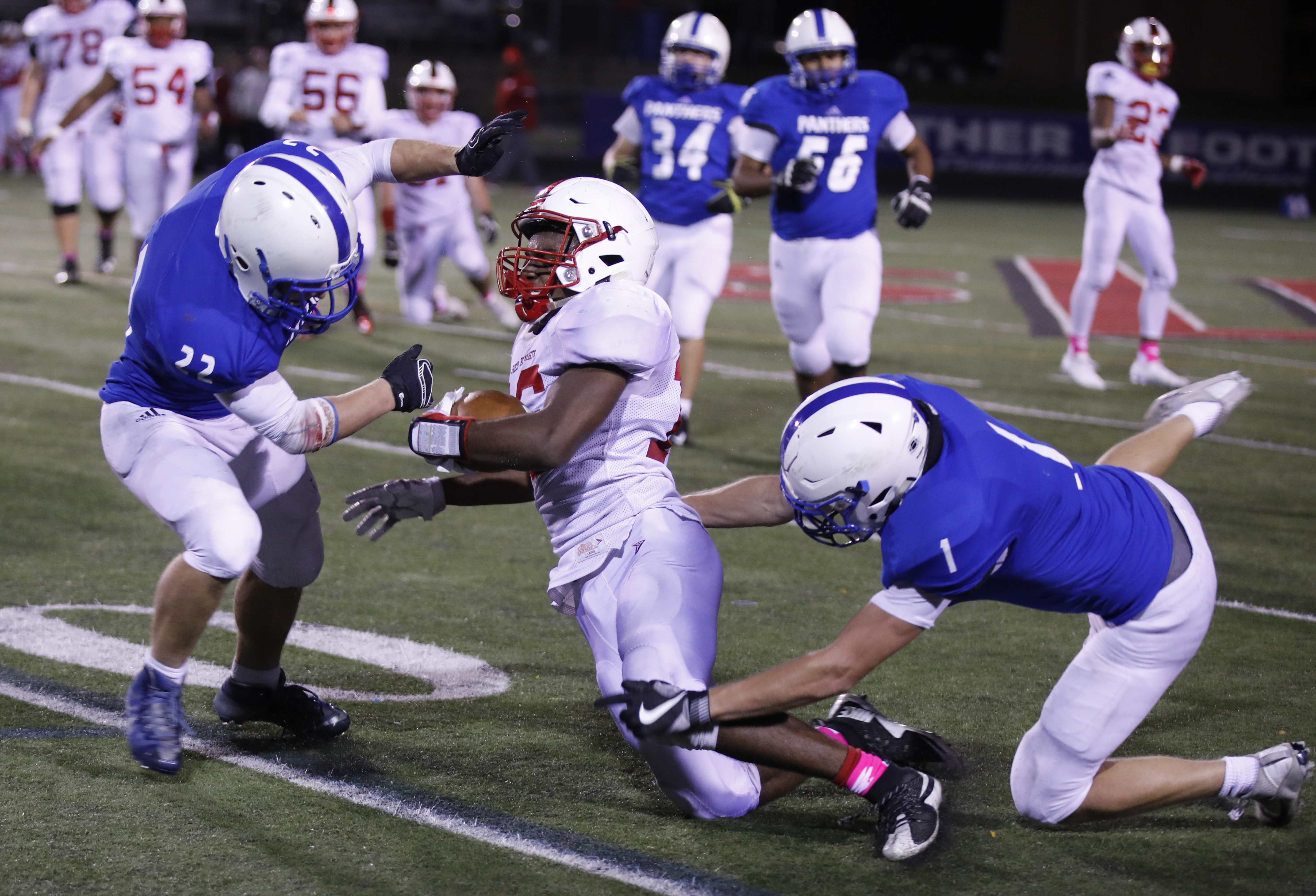 Ikenna Ujuagu (16) of Bernilde gets taken down by Nicholas Robinson (1) and Cade McMahon of Spring Lake Park. Spring Lake Park defeated Bernilde-St. Margaret's at home 19-13 in overtime from a tochdown from the senior QB, Zachary Ojile. Photo by Chris Juh 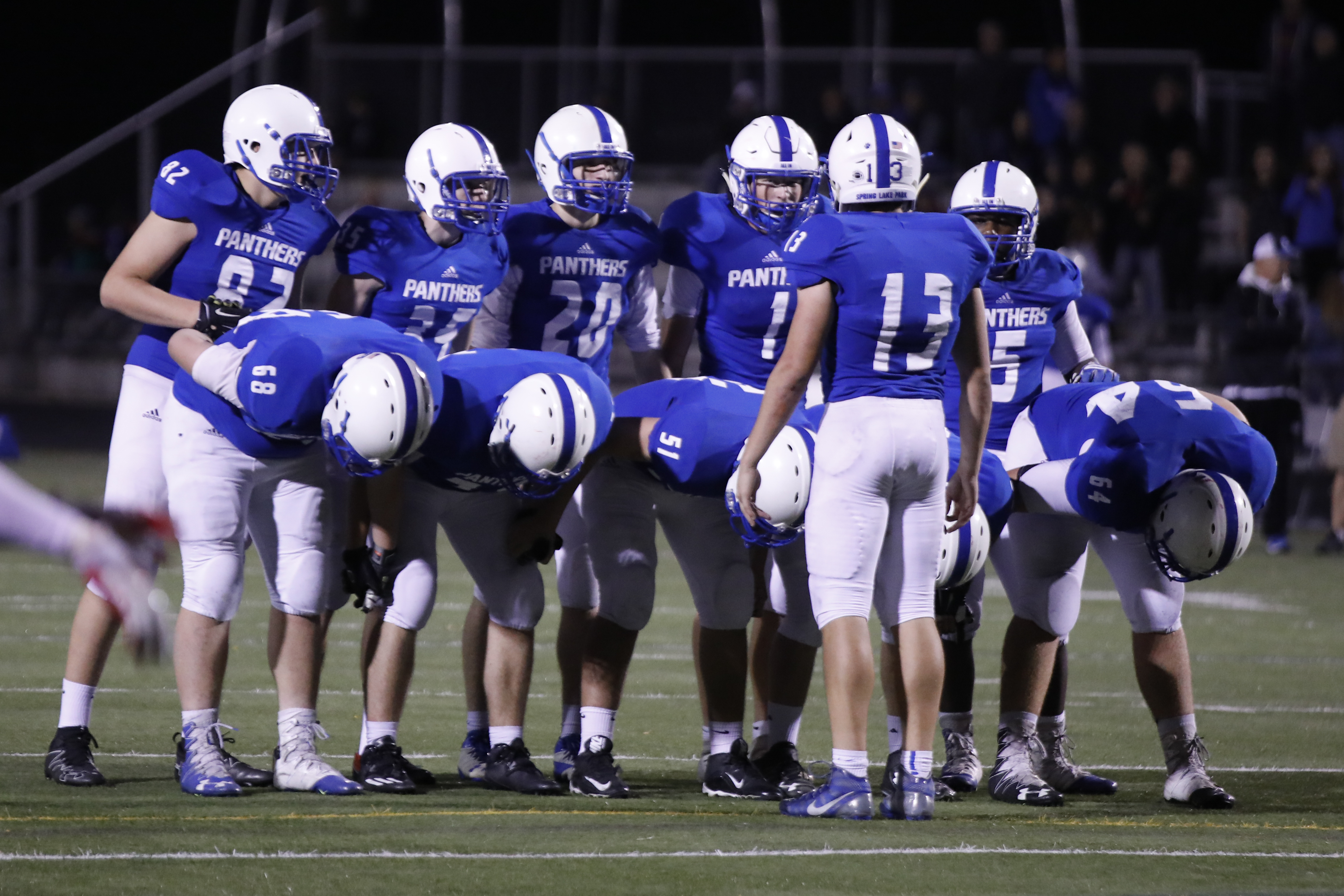