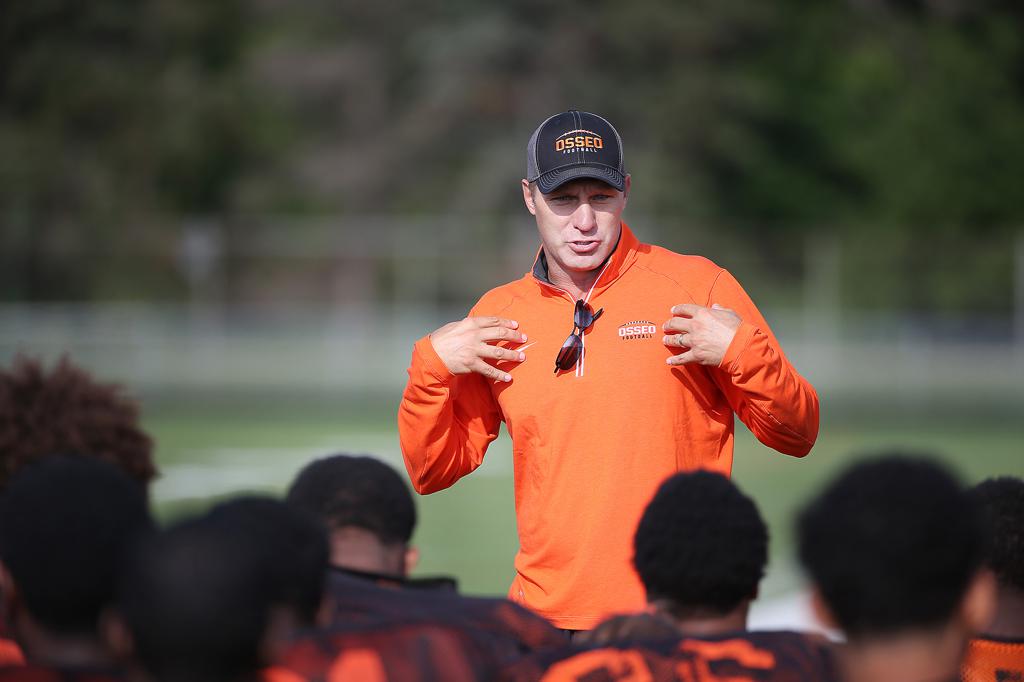 Osseo coach Derrin Lamker gave a pep talk before practice prior to the start of last season. The Orioles won the Class 6A Prep Bowl, but Lamker will not return. He's taken a job at Edina. (Elizabeth Flores, Star Tribune)

Derrin Lamker, the coach Osseo’s Class 6A football state championship team last fall, said Tuesday that he has resigned “for family reasons” and will become the offensive coordinator at Edina.

“Osseo was a great place, but I am ready for a change and a new challenge,” said Lamker, who coached at Osseo for 11 years. His teams won three conference and two section titles. The Orioles won their first state title with a 14-13 victory over East Ridge in the 2015 Prep Bowl.

Osseo (11-3), which suffered three consecutive losses in September, marched through the playoffs, winning five games, including dramatic come-from-behind, last-minute victories over Totino-Grace in the Class 6A semifinals and East Ridge.

Lamker and Edina coach Reed Boltmann have been friends since 1997, when he was coaching the Augsburg College defense and Lamker was a senior quarterback. Lamker joined the Auggies coaching staff the next year and stayed for four years before becoming a high school coach.

Boltman said that he’s excited to have a coach of Lamker’s caliber join his staff. “We talk to each other about once a week,” Boltmann said. “I’ve offered him a position here a couple of times before. He just felt now was the right time with his family to make a change.

“I’m excited. I can turn the offense over to him and not worry about it.”