The winter storm and forecast of colder weather has officials concerned that fields could be unsafe even if the wet snow can be removed. 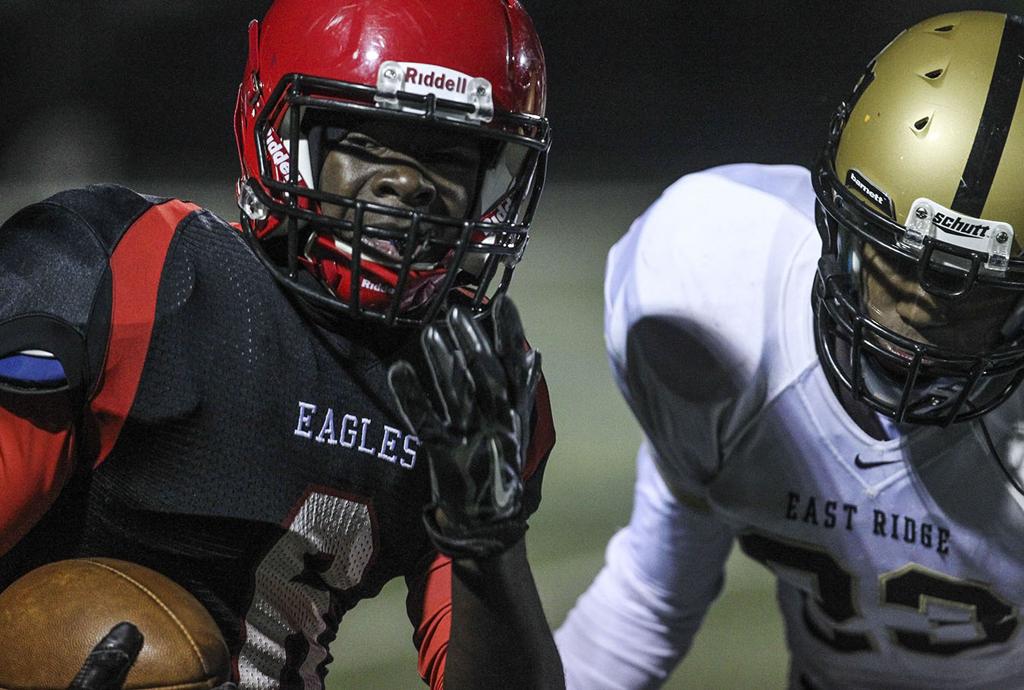 Eden Prairie and Maple Grove are scheduled to play in Edina on Friday night for a Class 6A Prep Bowl berth. The Minnesota State High School League is considering moving games to sites where field conditions and weather could be better. Pictured is Eden Pr

On the eve of playing the Minnesota high school football state semifinals outside for the first time in 25 years, the big dose of wet snow and cold weather is threatening to mess up the schedule of games this week.

“A good possibility’’ exists that some of the 14 games set for Thursday through Saturday will be moved to different dates or sites, a top Minnesota State High School League official said Monday. The reason stems from concerns about removing snow without damaging field turf and the prospect for colder weather this week that could render them less safe, said Kevin Merkle, the league’s associate director who oversees football.

Games are scheduled at high school stadiums at Osseo, Edina, Hopkins, Wayzata and Eden Prairie, and at Husky Stadium at St. Cloud State. It’s the first time semifinal games have been played anywhere but the Metrodome since 1989.

Merkle said other sites now being considered include those in southern Minnesota, including Rochester, where little or no snow had fallen. But he acknowledged that “everything is really unknown’’ and that much depends on how much and where snow falls. He said he expects to decide in the “next couple of days.’’

The first semifinal game, a Class 6A matchup between Lakeville North and Totino-Grace, is scheduled for 7 p.m. Thursday at Osseo High School.

The storm dropped several inches of moisture-laden snow, posing a challenge for how to remove it without damaging the field turf with heavy equipment, Merkle said. Moreover, if colder weather materializes as expected, moisture left on the field will freeze, making the turf less playable and more dangerous for players, he said.

“The forecast is not good. It’s supposed to get colder as the week goes on, with no sun,’’ he said.

Officials at all participating schools were alerted of the possibility of changing the schedule. “It depends on how much snow we get,’’ Merkle said.

While St. Cloud reported 10 inches of snow, Husky Stadium, which hosts two semifinal games on both Friday and Saturday, is expected to be cleared on Wednesday and be playable, he said.

The league is looking at possibly consolidating games at other sites to make the most efficient use of snow removal efforts. Edina and Wayzata are each hosting one game, while Osseo and Eden Prairie are each hosting three games. Hopkins is hosting two games.

When the league scheduled the games, it did so expecting that host schools would handle snow removal — perhaps a few inches, if any — and be reimbursed by the league. While schools don’t typically clear fields this late in the football season, schools have equipment to sometimes clear them in March and April for spring sports.

Asked about playing games inside, Merkle said he made a call Monday to the Fargodome.

The Metrodome hosted semifinal games beginning in 1990 and the Prep Bowl since 1982. The league moved this year’s Prep Bowl to TCF Bank Stadium on Nov. 21-22. The games will be there again next year before moving to the new Vikings stadium starting in 2016.

Merkle said the league briefly considered moving back the semifinal games to next week and pushing the Prep Bowl back to its usual post-Thanksgiving slot. He said there were “way too many moving parts,’’ including TV and Gopher stadium challenges, to making it work.

Meanwhile, some teams preparing to play this week have moved their practices inside domed facilities to escape the weather. Eden Prairie and Maple Grove, which are scheduled to play Friday at Edina, both have covered practice fields on their campuses. Lakeville North moved practices to a dome in Savage.

DeLaSalle, which plays Hutchinson on Saturday morning in Wayzata, has no fields at its downtown Minneapolis campus. Rather than practice at its usual field at Marshall Terrace Park in northeast Minneapolis, the team is practicing all week at the Vadnais Heights dome.

“This year, because everything is outside, we preferred to stay outside for practice. But with today’s weather and the snow, we’ve moved practice indoors all week,” Islanders athletic director Darcy Cascaes said. There is an added cost to renting a practice facility, but “our football team does a lot of fundraising and that offsets some of the costs,” Cascaes said.