A trip to the state tournament is on the line Friday night for five north-metro football teams. 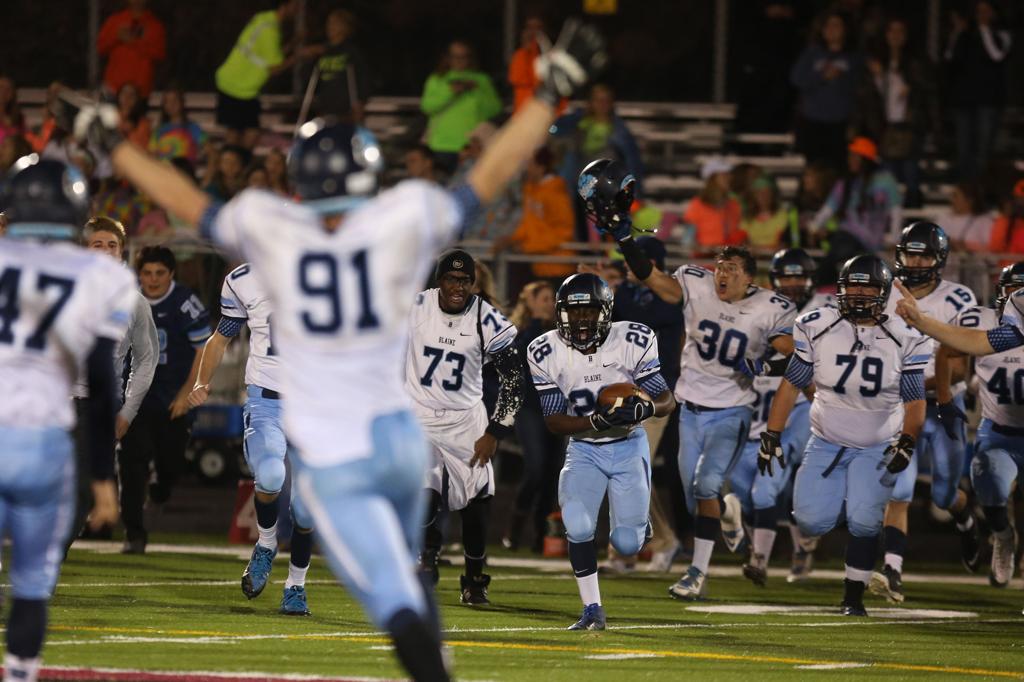 Blaine celebrated its come from behind win in the section tournament.

It’s regarded as the best night of the high school football season Friday, when players throughout Minnesota pump all their passion and pride into realizing their state tournament dreams. Here’s a look at five north metro teams either carrying the No. 1 section seed or playing the underdog role against a top-seed. All games start at 7 p.m.

Coaches for both programs are looking past the obvious. Blaine doesn’t play like a No. 6 seed to Mounds View’s Jim Galvin. And the Mustangs’ defense, while undersized, has impressed Blaine’s Tom Develice.

Mounds View’s wing-T offense is predicated on running the ball. Backs Jeff LeMay (371 yards), Danny DeWitt (344) and Joe Janey (274) are an effective trio capable of gaining yards inside and out. When it’s time to throw, quarterback Joe Fredrickson typically finds tight end Ryan Kaczynski for big plays. They have connected for 10 touchdowns.

“We like to run but we don’t get a lot of big running plays,” Galvin said. “So hitting the play-action pass is key. Joe’s accurate and finds the right guys.”

Develice said avenging a loss to the Cougars started with the right mind-set.

“In some of our games, our kids would get down on themselves and then either we couldn’t score or couldn’t stop the other team from scoring,” Develice said. “The past few games we’ve fought back and played 48 minutes and some good things happened.”

“We’re still a new enough program where every game is a step that matters,” said Lombardi, in his fourth year with the Crimson. “It’s not hard to get up for this game because it’s the last home game of the year and it’s the win you need to go to state.”

“His emergence is big,” Lombardi said. “He’s a sophomore that’s played a full year so he’s trickling into junior territory.”

It takes awhile for the St. Francis Saints to go marching in. They traveled to Brainerd last week and hit the road for Bemidji next.

“We knew this would be our path as the No. 3 seed,” Saints coach Chris Lindquist said. “The kids understand and they think it’s fun.”

The formidable trio of quarterback Hunter Trautman, running back John Santiago and tight end/defensive end Blake Moreno have performed to the best of their abilities. But several other players have emerged to fill key roles. Junior running backs Isaiah Brunette and Max Green have combined for 946 yards and 11 touchdowns. Receiver Tyler Pallum became a downfield threat, catching 23 passes for 423 yards (18.4 yards per reception) and five touchdowns.

These teams met in the first round last fall and Spring Lake Park escaped with a 15-14 victory.

“I’m sure they’re looking to do to us what we did to them,” Panthers coach Jeff Schlieff said.

Much has changed for Spring Lake Park since last season. First and foremost, the team joined the Northwest Suburban Conference and saw a considerable upgrade in week-to-week competition.

“Maybe it’s nice to be more rested than having to play so hard for so long but you have no choice but to get better,” Schlieff said.

Aaron Murphy, who caught two touchdown passes to beat Mahtomedi last year, moved to free safety. But the primary story of the Panthers’ secondary is Josh Bauer. He has 11 interceptions this season.

Stillwater (7-2) at Totino-Grace (8-1): Each team features a bruising running back: Zach Knox (Stillwater) and Kez Flomo (Totino-Grace). The Eagles have made five consecutive trips to the state tournament; Stillwater hasn’t advanced there since 2006.