Scoggins: A time to honor and remember at Minneapolis South

For Minneapolis South, the football opener helped with healing following the death of a teammate. 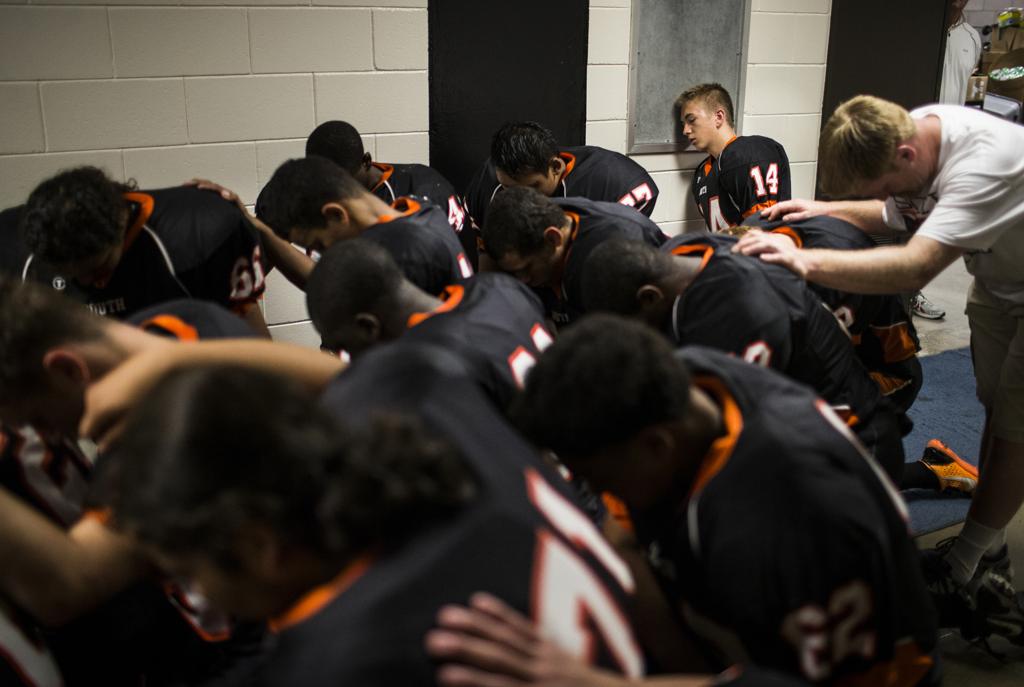 Lenny Sedlock paced a hallway inside Minneapolis South, struggling to contain his emotions. His football team sat on the floor, listening solemnly to every word.

One player lowered his head and closed his eyes. Another stared at the ceiling, tears welling in his eyes.

Twenty minutes until their season opener, their minds flashed to three weeks ago and the pain they’ve endured since tragedy hit their program. Sedlock’s voice grew loud as he recalled how a group of them had jumped courageously into a lake to try and save one of their teammates.

The start of a new season Wednesday night represented another step in the healing process for a family and a football team coping with the death of 15-year-old Sha-kym Adams, who drowned in Lake Nokomis in early August.

Sha-kym was a sophomore wide receiver. He worked hard this summer so he could make varsity and earn a letter. Teammates loved his determination.

“He was like a brother to us,” senior quarterback Anthony Hockett said.

South honored Sha-kym’s family before their home game against Eden Prairie. The school presented his parents, Kimberly Adams and Sharrod Rowe, with his No. 17 jersey and a letter jacket.

“Our kids need this,” Sedlock said.

Sha-kym had joined a group of players who decided to go for a swim after a summer workout. At some point, Sha-kym began to struggle in the water and drowned.

Sadness and guilt consumed teammates, especially those who were with him. Hockett was the first person to reach Sha-kym in the water, but he was unable to rescue him.

Hockett blamed himself for not being able to help his friend. But then he listened to Sha-kym’s mother speak at a vigil later that night and felt comforted.

Despite her unimaginable grief, Kimberly Adams consoled her son’s teammates. She told them this was an accident and that no one was to blame. Kimberly said she was thankful that her son was with his teammates, his football brothers, doing something that he loved.

Her strength uplifted everyone.

“There were a lot of kids that tried to help him,” Kimberly said on the field Wednesday. “Even one kid that didn’t know how to swim at all. That takes guts.”

Sports often become a therapeutic diversion from personal hardship, and so it is for these young men. They find comfort in each other’s company. They go to dinner together and gather for barbecues. They hang out, play video games, anything just to be together.

“We feel like a family,” junior defensive end Elerson Smith said. “We were always close but never this close.”

If there’s any light that can shine in this tragedy it’s that Sha-kym’s family and his teammates have felt the warm embrace of strangers and displays of compassion that make those hurting feel so loved.

Eden Prairie coach Mike Grant told his team that he planned to attend Sha-kym’s visitation and invited anyone to join him. More than 40 players showed up. They wanted to pay their respect and learn more about Sha-kym from his family and friends.

“This is the most important lesson that we will learn all year,” Grant said.

That gesture meant everything to Sha-kym’s family and teammates. His mother spoke to the Eden Prairie contingent and then hugged each player as he left.

“For Eden Prairie to show so much respect for us as a team and for him as a player and his family, that’s a class act,” Hockett said.

The Minnesota Vikings offered their embrace, too. The organization provided buses to bring Sha-kym’s family and South’s varsity team to Winter Park last week to watch practice and tour the facility. Adrian Peterson and Cordarrelle Patterson spent time with the family and took photos with players.

University of St. Thomas coach Glenn Caruso texted Sedlock the day of the accident. Gophers coach Jerry Kill called and talked to him for 20 minutes. High school coaches around the state reached out and offered their support.

This is how communities should respond. In sorrow, they show their heart.

“We want to thank everybody,” said Sharrod, Sha-kym’s father.

South’s players are able to smile now when remembering their friend. They loved his positive attitude and his dedication. Sha-kym showed up for every captain’s practice this summer, even on Saturdays.

“We’re dedicating this season and this game to his family and Sha-kym himself,” Hockett said on the eve of Wednesday’s opener.

The outcome, as expected, didn’t go the way they wanted. Eden Prairie was simply too powerful for South and won 48-6.

The final score was irrelevant. What truly mattered couldn’t be found on a scoreboard.

A grieving family felt the love of its community and a high school football team pulled together and continued to move forward.

“I want them to feel better,” Kimberly Adams said. “I don’t want this to go on and be a nightmare for them. Not at all. Just keep doing what they’re doing.”