Minnetonka's Nick Rooney: A golden arm, a sense of style 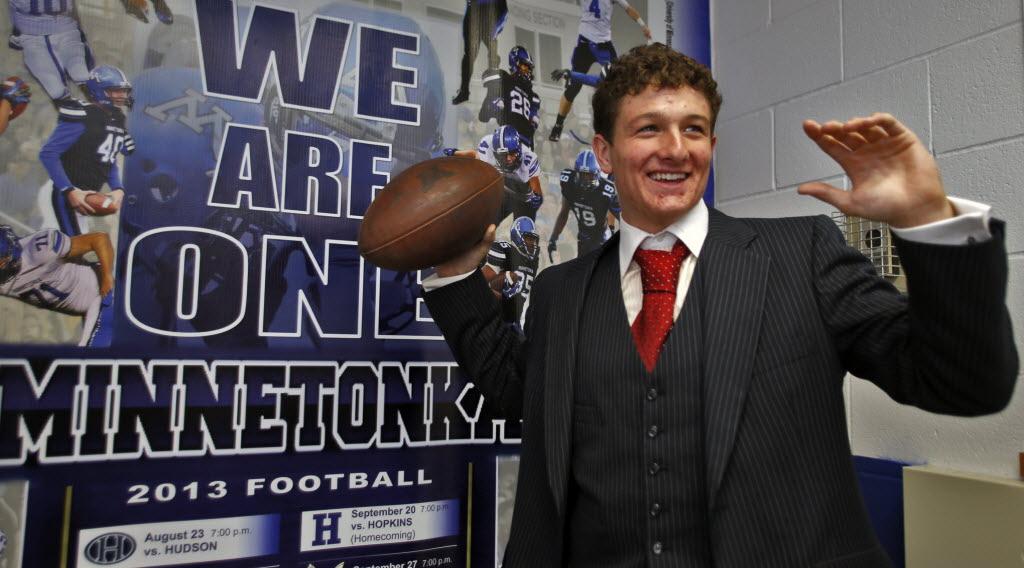 Mitch Felknor remembers the first time he met Nick Rooney, in the summer of 2012. Rooney, then a junior, had just moved with his family to Minnetonka from Prior Lake.

“It was the first day of summer workouts, and it was raining,” said Felknor, now a senior wide receiver. “And he walks in wearing this crazy Hawaiian shirt, singing a song about liking pina coladas. I thought, ‘Who is this guy?’ ”

He’s a nattily dressed, meditating, fun-loving, charismatic leader who also happens to be one of the metro area’s best quarterbacks. Combining a confident swagger with a rocket arm, Rooney has passed for 1,456 yards and 13 touchdowns in six games for the 5-1 Skippers.

The senior and his team will get their biggest test Friday night when they play host to Lake Conference rival Eden Prairie, the state’s top-ranked team in Class 6A.

Off the field, in only his second year at Minnetonka, Rooney is already one of the most recognizable students in the school. That is largely because of his outsized, outgoing personality. His distinctive fashion sense doesn’t hurt, either. He wears a different suit, complete with tie and cuff links, to school each day.

“At first you thought, ‘What’s with the suits?’ ” said senior Macy Narr, a football team manager. “But that’s who he is. He’s just Rooney being Rooney. Everybody wants to know what he’s doing.”

Which depends on when one catches up with him. He might be meditating, which he says he does up to two hours each day. “That’s powerful stuff,” Rooney said. “It’s helped a lot, especially in football. It’s keeping me on a straight path.”

He might be shopping for suits, most of which he finds at local thrift shops. “There’s one that I go to — I won’t say the name — that has really good suits from the rich people on Lake Minnetonka,” he said.

Or he might be playing cards. Or looking for ways to motivate his team. Or making new friends, which seems to be a specialty.

That confidence carries him on the field. He oozes charisma, embracing expectations and usually delivering. The greater the pressure, the more he thrives.

“He has extreme self-confidence,” Skippers coach Dave Nelson said. “He loves to have the ball in his hands. He’s confident good things will happen. And he has a very short memory. If something doesn’t go well, he doesn’t let it affect the next play, which is really important for a quarterback.”

Rooney, who is listed rather generously on the Minnetonka roster at 6-2 and weighing 200 pounds, admits that his greatest asset is his belief in himself.

It’s a fine line between confident and cocky, but Rooney appears to deftly walk that line. While first impressions of him often raised eyebrows, he’s been able to win over his coaches and teammates with his love of what’s he’s doing and his dedication to doing it well.

“The first time I met him, he walked into the room with this huge Afro,” said senior safety Anthony Tatum, Rooney’s closest friend on the team. “But he worked hard and he proved himself. He’s a gamer who will do anything for you. He talks the talk, but he also walks the walk.”

Junior Braden Sikes was Rooney’s main competition for the quarterback job before the season but was moved to wide receiver when Rooney won the job. Sikes, who is second on the team in receptions with 34 (teammate Felknor leads the metro with 42), said he knows Rooney has the skills to take the Skippers deep into the playoffs.

“He throws the ball harder than I do and he’s got so much confidence, he can fit it into tight spots,” Sikes said. “You always have to be ready to catch the ball because there’s always a chance it will come your way.”

Playing two-time defending state champion Eden Prairie is often enough to intimidate opponents. There’s no intimidating Rooney. The spotlight is nothing more than an opportunity to shine.

“I’m super excited for this game,” he said. “There’s a lot of pressure, but I love pressure. I look forward to it. This is what you play for.”