The head of the Star Tribune's Super Preps class of 2013 is already enrolled at Notre Dame. 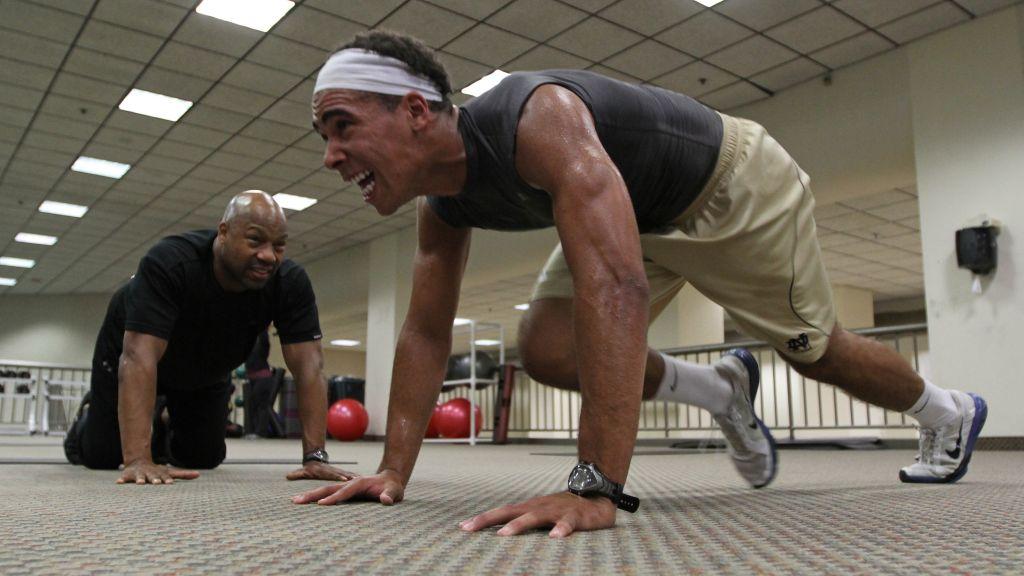 The journey to Notre Dame for Cretin-Derham Hall wide receiver James Onwualu began when he was 13 years old.

He attended a summer football camp when he reached high and hauled in a pass from former Irish quarterback Brady Quinn. Among those impressed by the moment was camp director Ted Johnson.

Onwualu soon committed to Johnson’s high-intensity training program, a regimen used by many professional and college athletes. Six days a week for two-plus hours, the pair engaged in individual-specific workouts geared toward making the teenager a top-line football recruit.

The hard work and dedication paid off.

Earlier this month, Onwualu signed a full scholarship with the Irish, moved to South Bend and started taking classes.

“I don’t like to use the word ‘special,’” Johnson said, “but if I had to put my finger on what makes him special, it’s that he has always been committed to the process. It’s rare to be that young and want to be great.”

Veteran Cretin-Derham Hall coach Mike Scanlan said: “I’ve rarely seen somebody as focused as James. He did not deviate from point A to point B. I’ve coached many focused and talented guys, but I don’t know if any were as focused as him. I don’t even know if he knows how good he is.”

“It’s weird,” Onwualu said on his last night in Minnesota, as he recalled catching the pass from Quinn.Three photos documenting it hung on a wall of his bedroom in St. Paul, surrounded by Notre Dame paraphernalia. “I was 13. I had no idea where I would be. Now it’s beginning to feel real.”

Christmas for Onwualu came on the morning of Dec. 5, when he awoke to something he had been wanting and working toward for months.

“Got that 4th star this morning!” his Twitter account read, referring to Rivals’ national rating system of high school recruits. “I’ve made major improvements, but still have to grind every day.”

Until then, he ranked as Minnesota’s second-best recruit behind Keelon Brookins (Tartan), who also is rated four stars out of five. Though Cretin-Derham Hall’s season ended in the last week of October and he had committed to Notre Dame nearly nine months earlier, Onwualu continued to strive to be great.

His friends, coaches and trainer questioned why he cared so much about the status. To him, it was less about the stars and more about another goal he had to prove he could achieve.

“He wants to be the best player, ever. And he has the mindset he can be,” said Wayzata running back Mitch Underhill, who worked out with Onwualu in Johnson’s program. “He has to prove it to himself.”

Countless hours on the field and in the gym and watching film gave Onwualu the edge throughout high school. Despite breaking his jaw the summer before his senior year, he finished the season leading the Suburban East Conference in scoring with 116 points. He collected nearly 1,000 receiving and passing yards and had 18 touchdowns.

Yet Onwualu felt he had underachieved. Scanlan takes responsibility for this. The coach said he should have gotten the versatile player (wide receiver, running back, defensive back, safety) more touches during the Raiders’ 6-3 season. Onwualu made it clear he could do more by producing in numerous roles on offense, defense and special teams, but he never complained to the coach. He simply performed when given the chance.

“He never said a word. He’s one of the best captains I’ve had in a long time. A really good leader by example,” Scanlan said.

Following Floyd’s path Notre Dame’s new prize doesn’t hesitate to include his name among Minnesota’s elite wide receivers. Onwualu seized the opportunity to work out with and get to know Arizona Cardinals receivers Larry Fitzgerald Jr., who attended Holy Angels, and Floyd. The pair often train with Johnson, where Onwualu observes and learns.

Floyd and Onwualu’s similarities have developed a deep respect for one another. Both were standout receivers at the private Catholic school in St. Paul and both decided to continue their careers at Notre Dame. Floyd left behind a long list of accomplishments for Onwualu to consider.

Though he said he didn’t want to get stuck in Floyd’s shadow in South Bend, Onwualu plans to break every record (six total) his mentor set in college. That means he will need to earn a starting job a freshman.

“Working with him you see a talent that you don’t see very often. He has the mentality to keep going and not stop,” Floyd said. “I had in my head I wanted to go there and be a special player, and I think he has that same idea in his head. You always have to be competitive to get somebody better. If that’s his goals in his head to surpass my stats at Notre Dame, more power to him.”

Onwualu watched from the doorstep of his family’s home on Cretin Avenue as a car full of boxes pulled away and departed for Indiana on Jan. 11. That night before he left town, he spent time with close friends and his mother, Ann Perry. He dominated the conversation as he toyed with one of the many footballs laying around his house.

Eventually he made his way to a goodbye party.

Two days later, he sat in a lecture hall with college students. A fellow football player saved him from eating his first college lunch alone. But this is what Onwualu wanted. As he watched Notre Dame fall hard to Alabama in the BCS Championship Game, his sense of urgency to get to work increased

. He took coach Brian Kelly’s postgame comments, of the Irish still being a step away from greatness, as a call for Onwualu to do more.

“We know there are more steps to be taken to get this done. It’s an awakening for us,” Onwualu said. “I truly believe I’m one of the best in the country and can earn a spot.”

VIDEO: On his way to Notre Dame

James Onwualu has left Cretin-Derham Hall to begin his college career, both in the classroom and on the field, at Notre Dame. He talks about the challenge of winning a prime spot with the Fighting Irish.

By the numbers: James Onwualu