Is 8 enough for Grant?

The Eagles coach responds to talk of leaving Eden Prairie, and other dome doings 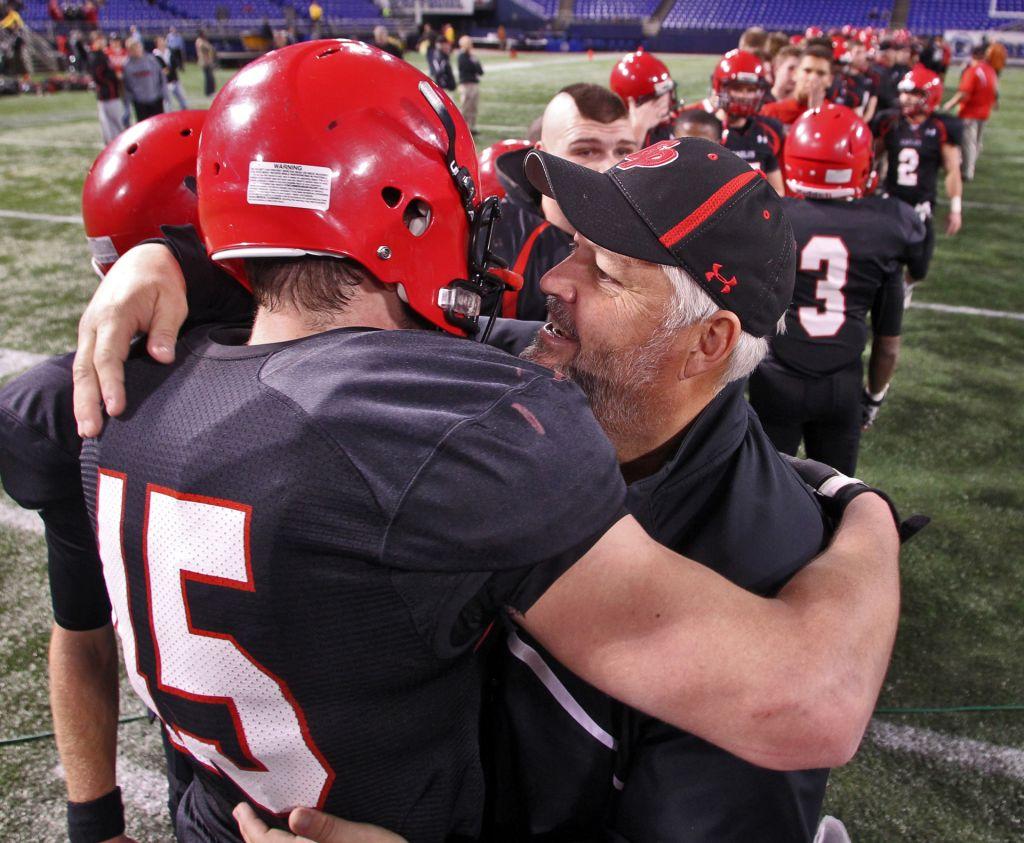 dispatches from the dome

For now, Mike Grant will remain in an Eden Prairie cap.

The storied high school football coach said he will begin preparing for next season Monday -- putting to bed, at least for a few days, rumors that he would be the next coach at St. John's University.

After winning Minnesota's first Class 6A state championship with a 28-7 victory over Lakeville North on Friday night at the Metrodome, Grant said he really hasn't had any conversation with St. John's, and he has got to see if the Johnnies have any interest in him.

The comment left the possibility for job change open, though. Asked if he would take the job if offered, Grant said, "It all depends."

"The only way I like to coach, now, is to have a chance to win a state championship or national championship, and right now we have things going [at Eden Prairie]," Grant said. "I think we started 12 juniors tonight, so we got a chance to go for [state title] No. 9 next year."

Grant said the rumors of his possible departure were never a distraction to the team because nobody talked about it. However, seniors Tyson Reinke and Grant Shaeffer admitted there were whispers among the Eagles.

"It was in the back of my head, I'm not going to lie," Shaeffer said about his desire to send Grant out on top. "If it is Coach's last year, we better win."

Though Reinke prefers to see Grant back in Eden Prairie next season, he said he would be happy with whatever decision his coach makes.

"He's the best coach in Minnesota, in my opinion," Reinke said. "He's had an amazing run at Eden Prairie."

The teams from the inaugural Prep Bowl matchup will be reunited during halftime of Saturday's Class 3A final.

What started out as a Facebook movement will be an on-field reunion of the 1982 Class B final featuring LeCenter and Mahnomen -- they played in the openingt game of the first Prep Bowl in the Metrodome.

It's hard to miss the blond mohawks on the Caledonia sideline.

The Warriors football team continued a state tournament tradition of shaving the sides of players' heads and bleaching what remains.

"We get the mohawks out for state," Jacob Cuda said. "It's good luck."

Apparently it is. Caledonia has played in six of the past eight state finals since adopting the look in 2005. Former Warriors defensive lineman Karl Klug -- a 2006 alum now in his second NFL season with the Tennessee Titans -- is credited for starting the tradition.

• Grand Meadow captains Bryce Benson, Perry Stejskal and Brock Johnson had fathers on the school's 1987 11-man team that was also a runner-up.

• Lakeville North and Eden Prairie met in their second fall state championship Friday. The Panthers beat the Eagles in the volleyball state final.

• Moose Lake-Willow River coach Dave Louzek ignored the snow on the ground Friday and continued his trend of wearing shorts throughout the state tournament.

The Wolverines fullback ran for 126 yards, an average of 9.7 per carry, and two touchdowns. He also returned a kickoff 82 yards for TD and intercepted a pass before being carried off the field in the final minutes. He had blood coming from his knee and ear while limping around with the Nine-man championship trophy.

393 Clinton-Graceville-Beardsley's rushing total, with runs of 51, 49, 73 and 39 yards. The Wolverines pass offense was nonexistent; they had zero passing yards on three attempts.

17 It took Caledonia 17 plays to drive 63 yards to the 2-yard line, but the Warriors were stopped short on the goal line. But three plays later, the Warriors intercepted a pass and walked in for the touchdown.

127 Points Hutchinson scored against Holy Family this season. The Tigers beat the Fire 60-7 on Sept. 28 and followed it up with a 67-7 blowout in the Class 4A championship game.

1 Lakeville North (2012) and Lakeville South (2006) each has one appearance in the state championship since splitting into two schools. In 2003, Lakeville, as one school, won the 5A title.

"Not good. It's tough to lose that way. That's not the way you want to end the year. ... Not what we wanted. But the journey was great."

-- Holy Family quarterback Ben Baker on losing big to Hutchinson for the second time this season. The Fire's last two losses were to the Class 4A champ.